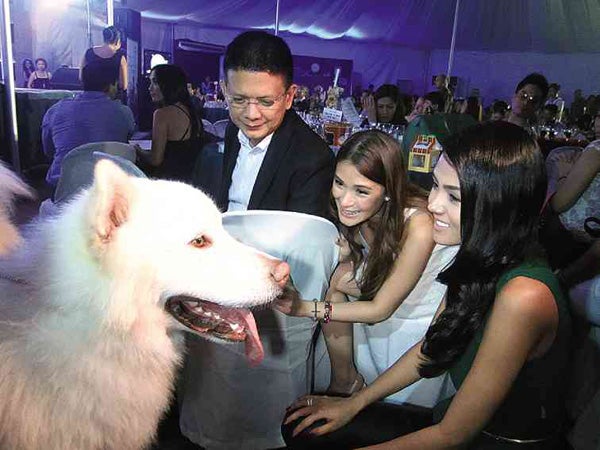 Dogs get their red-carpet moment (with Chiz and Heart)

Chiz Escudero and Heart Evangelista may have been the most photographed couple of the night, but although longtime supporter Heart was a special awardee, their love took a backseat that evening to the overwhelming affection of animal lovers and animal rights advocates, who came to the fabulous Dine With PAWS dinner event of the Philippine Animal Welfare Society (PAWS) last March 23 at the Venice Piazza, McKinley Hill.

Celeb animal lovers like Joey Mead, Pia Guanio, Patricia Hizon, Karylle, Daniel Matsunaga and sister Vanessa, and Lander Vera Perez and Regine Tolentino joined volunteers and other special guests who paraded on the red carpet with their dogs and enjoyed sumptuous buffets, including food by The Red Crab, Amici and Marciano’s for the humans, and Whole Pet Kitchen for the dogs. Doggie bags filled with treats were also given to guests. Other sponsors were McDonald’s, Thousand Teas, Swell Sweets, ArtKits, Maynilad and Planet Grapes.

PAWS executive director Anna Cabrera led the awarding ceremonies, which paid tribute to Heart, who was inducted into the Order of the Platinum Paw; Golden Heart Awardee Rep. Bernadette Herrera Dy, Lower House champion of the Animal Welfare Act; PNP QC’s Criminal Investigation and Detention Team, who raided the San Pablo dog fighting ring; and other institutions, public servants and individuals who helped further the cause of animal welfare in the country.

Among the program highlights was the delightful opening act, featuring Chardy Ang and his dog Chesca, who performed a Latin dance number; a presentation of some rescued animals who have been miraculously transformed by tender loving care, as evidenced by their “before” pictures; and a gathering of dog owners onstage for a few minutes as lights were turned off to mark a portion of Earth Hour.

Dine With PAWS, co-sponsored by Venice Piazza and Bow & Wow, gave pet lovers a chance to dress up along with their “furbadbies,” and the fun time had everyone looking forward to the next one. Alya B. Honasan