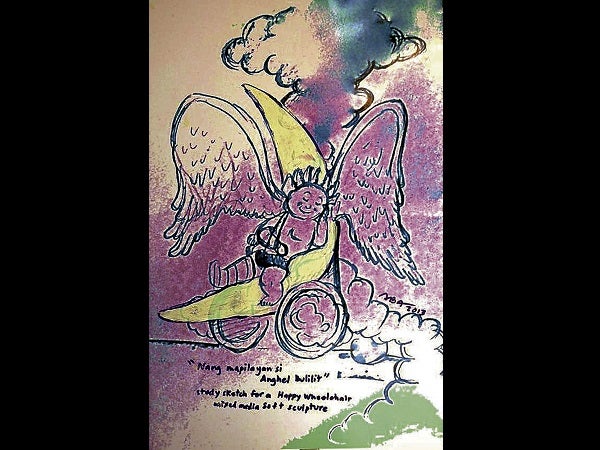 “ANGHEL BULILIT,” by Aba Dalena. Wheelchair for a child will be studded with soft sculptures and a pair of angel wings.

Please don’t rain on our parade

Dr. Joven Cuanang and I are pleased to report that the wheelchair project that we embarked on has gained ground. Out of the target of 17 to 20 embellished wheelchairs, we have received sponsorships, partial and full, for 11.  Names will be released when Doc is back from his, ehem! Paris jaunt.

Among the nine artists who were tapped, wholeheartedly and generously agreed to join, submitted their required wheelchair sketches and accepted their measly grants, are Gerry Leonardo, Marc Cosico and two teams of Makiling High School for the Arts students; Don Salubayba; Aba Dalena, Wendy Regalado and Io Regalado.

Grants for and submission of planned designs by Nona Garcia, Lyn Quisumbing, Kawayan de Guia, Leeroy New and Robert Alejandro are forthcoming.  Wheelchairs for other artists are still being discussed, more importantly whether we can raise enough funds for them without killing ourselves.

The venue for the much-awaited Wheelchair Parade will be Bonifacio High Street, Bonifacio Global Village, Makati. Location to be pinpointed at a later time.  It is open to all.  So please come and watch our spectacle!  Date is Apolinario Mabini’s birthday on July 20, 2013, 3 p.m.  Bring umbrella if cloudy and send eggs to Sta. Clara Monastery.

Enjoy these early drawings and just hope the chairs end up looking like them!

Then in the next paragraph “Cell phones became an indispensable lifeline, never away from one’s body.  Available 24/7, it has destroyed sleeping patterns of both the working and the idle.”

A vital line was missing between those two sentences.  Because obviously, cell phones do not destroy sleeping habits even when on 24/7.  The missing line is: But nothing has quite captured younger people as much as the Internet. Available 12/7 etc.” But of course, it is the Internet that has ruined the sleeping patterns of younger people, not the benign cell phone!