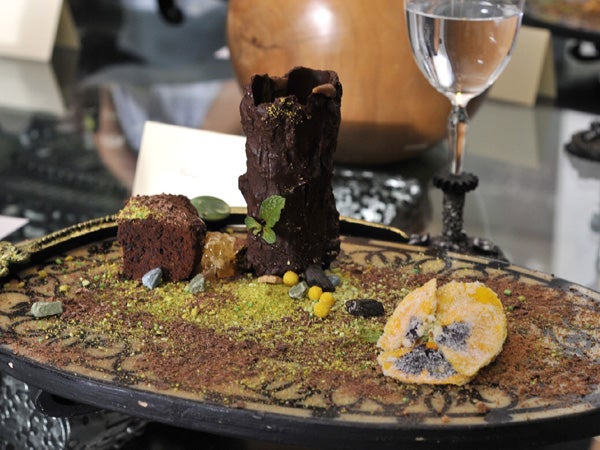 MY younger son is a food adventurer. Every Sunday, when he tags along with his father to the weekend market, he comes home with dishes he wants to try. He introduced himself to dinakdakan, papaitan and kilawing kambing, three Ilocano dishes that I never taught him to eat. (My Ilocano father, were he still alive, would have been delighted.) Another time it was ratatouille, fish head curry and shepherd’s pie. They form part of our Sunday fare, a mixture of cooked food and those that we cook from scratch.

The weekend market they go to is Sidcor, now located at the Eton Centris Walk in Quezon City, beside the Quezon Avenue MRT Station. But ask my son for the names of the stalls and he doesn’t know. It seems he looks only at the food, transacts with the vendor, then goes on to the next stall where the food attracts him. The names aren’t important, he tells me. But for this story, he agreed to look for the stall name or, if it wasn’t displayed, to ask the sellers.

The ratatouille and the beef curry we had last week are from Mom’s Kitchen. Our favorite fried vegetable lumpia with the sweetish vinegar dip and arroz caldo are from Mr. San Miguel. When my son reported that the roast beef, dinakdakan and tenderloin tapa are from Ben Jamon Household Specialties, I laughed. That was the sign, he insisted. And by the way, he added, the stall also sells ham.

Father and son have been going to Sidcor, not since it was located at the original place near Cubao, but when it moved to the Lung Center. Occasionally I join them, though I gravitate to the clothes and the housewares and the ingredients one rarely finds in Manila like the pako (fiddlehead fern) and the bahay guya, unhatched chicken eggs.

The lure of Sidcor is being able to buy specialties that come from the provinces and those from people who just love to cook. There is the tinapang bangus (smoked fish) from Bataan, boneless bangus from Pangasinan, live shrimp from Bulacan, longganisa and pancit habhab from Lucban, sinaing na tulingan and tambakol from Batangas. There are home cooks like Martin Gonzalez of Casa Paco who does the black paella. There’s Gng. Bukid, said to be Filipino for Mrs. Fields but who is represented by Ginoong Bukid (the mister) who can expound about the products they sell and is amused that there are ladies “of a certain age” who wait for him at the parking lot just to make sure they have first crack at the breads (the challah is fantastic) and pastries.

The weekend markets of Salcedo (Saturday) and Legaspi (Sunday) are smaller and so have less sellers than Sidcor. They mostly cater to the surrounding Makati villages and condo dwellers. So while the crowd in Sidcor is democratically middle class, the Makati weekend buyers can be classified in demographics-speak as AB. And so the offerings are more attuned to what they look for or are used to: French quiche, Spanish paella, organic this and that, mushroom dips great with lavosh, big ensaymadas, dark chocolate cakes.

The vendors are more likely to be trusted help instead of the purveyors or cooks themselves. Just listen to barkers shouting French food names and you get the drift. In those cases, there is limited interaction so important when you want to know the what, why and the how to cook.

The newest one is Mercato Centrale named after the famous market in Florence, Italy. I think the organizers just wanted an uppity name to attract the crowd they want, mainly the condo dwellers of Fort Bonifacio. Food that needs cooking is in the open tent section while those that need cooler temperature or don’t have to be cooked are in the airconditioned tent. The place isn’t that big. It has moved to a new location (see below).

Many of the stalls sell as well in Salcedo and Legaspi. So there are very few surprises here like Imang Salud (ensaymada and plantanilla) and the La Cabane French homecooking.

But there are those who only sell at Mercato. There’s Nico Bailon’s pan de bagnet, rolls of crisp pork cut thinly then placed inside a ciabatta with a sauce of tomato, garlic and shallots and burong mustasa (fermented mustard leaves). It’s a creation from Bale Dutung, a dining destination in Angeles managed by his parents, Claude and Mary Ann Tayag. My friend, Pam Lim, has Risa Chocolates that she makes herself (truffles and bars). There are mini cupcakes like saffron, peanut butter, red velvet and mango tamarind from Baked by Anita.

Unlike farmers’ markets abroad that are outlets for local farmers to sell their produce directly to customers, the weekend markets here are more about cooked food. Most buyers will purchase what can be eaten for breakfast and lunch (on site or back home) and, with the help of freezing, days after. The dishes not only free them from cooking chores but also enhance the menu with dishes that are never done at home. •