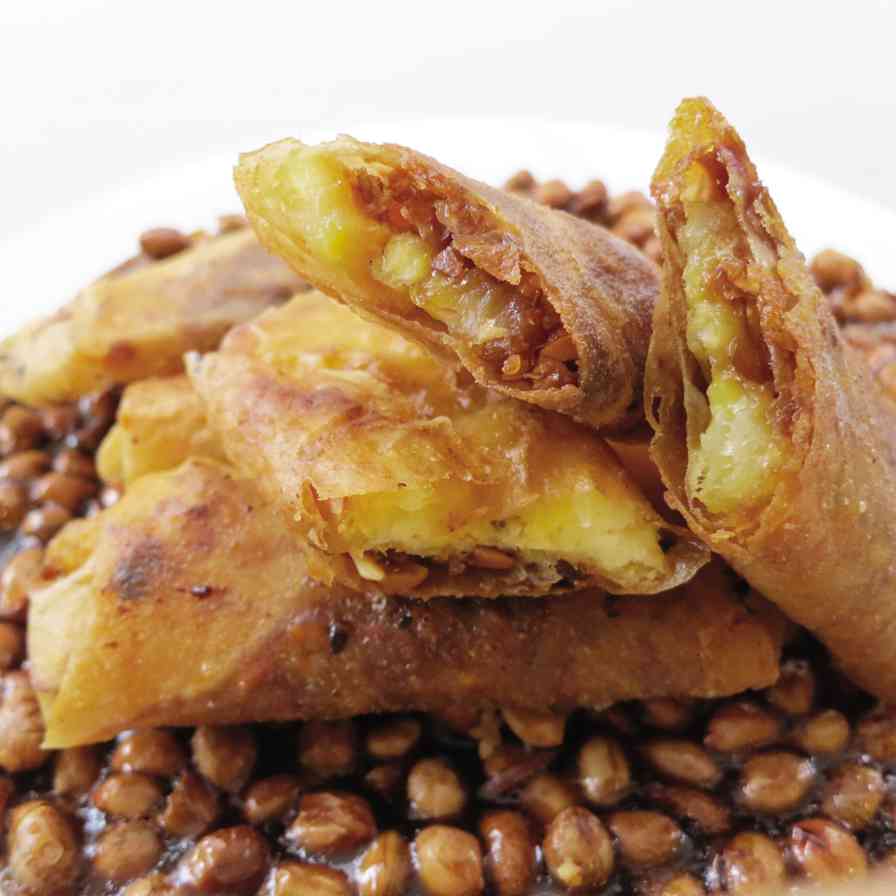 We see them in the market being peddled by street vendors, especially where tourists congregate: clusters of peanuts in large discs held by raw brown sugar. Known as panocha, this delicacy is our rustic version of peanut brittle.

Panocha is nice to munch on but then who can eat an entire disk?  It’s so sweet and sticky that one is likely to give up before finishing even half of it.

Moreover the panocha has become so common that we rather take it for granted.  I’d sometimes buy a few just to help the vendors, then I’d give them away as pasalubong when I get home.

On a recent trip to Taiwan, however, I discovered a new way to use this  delicacy. In one of the markets we went to, I saw a man grating what looked like panocha.  He had a large, very sharp grater that turned the panocha into fine, sandy grains.

He then spooned some of the grated panocha on spring roll wrappers, top this with two scoops of ice cream then wrap them like lumpia or turon.

Curious, I bought a piece and shared it with my sister-in-law Papoose.  I never found out what they were called but they were certainly delicious—the grated sugar and peanuts added flavor and texture to the ice cream.  It was like eating ice cream with a sprinkling of peanut butter.

Given this idea, I thought—why not incorporate the panocha into turon?  Thus the recipe for this week’s DIY.

As the bananas are being fried, the panocha caramelizes  with the bananas, imparting a rich, gooey texture on the turon.  It’s a novel way of eating turon and one that gives the ubiquitous panocha a new purpose in life.

With a sharp pair of kitchen scissors, cut the panocha into coarse pieces. Set aside.

Slice each banana in the center into two lengthwise pieces.  Brush the edges of a lumpia wrapper with cooking oil. Arrange a slice of banana on one edge of the lumpia wrapper. Sprinkle with some of the panocha.  Roll the wrapper to enclose the banana and the panocha completely then press the edges to seal.  Repeat with remaining bananas, panocha and lumpia wrappers.

Heat the oil in a frying pan to medium heat.  Fry the lumpia wrappers, a few at a time, until golden brown.  Transfer to a plate lined with absorbent papers.  Makes 12 pieces of turon. If desired, slice each turon diagonally in the center before serving.

Before cutting the panocha, brush the scissors lightly with cooking oil or spray it with nonstick cooking spray so the panocha doesn’t stick.

You can serve this with ice cream or with a dollop of whipped cream.

You can also sprinkle the grated panocha on ice cream, French toast and pancakes.

To save time, prepare the panocha the day before and store it in an air-tight container until ready to use.