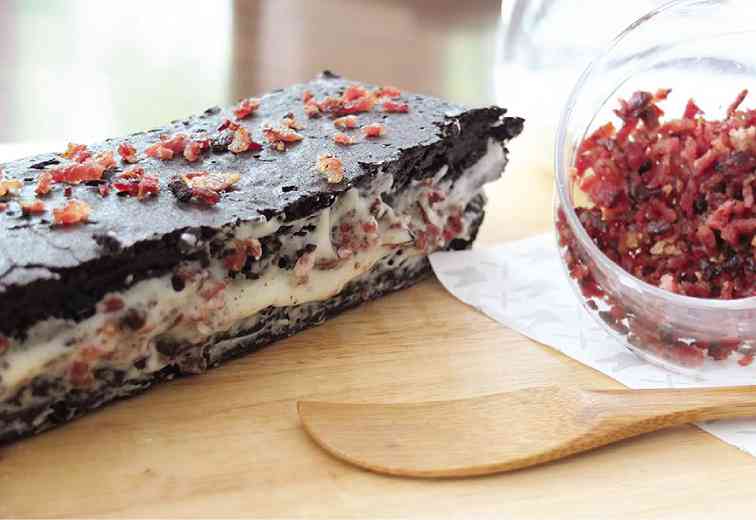 Meet the Bucky–a choco bar, cookie dough, ‘tablea,’ brownie, crinkle and cupcake all rolled into one

“A ‘Bucky’ is a hybrid. The best way I can try to describe it is if fudge, flourless chocolate cake and a brownie had a baby, that’s what a Bucky is,” said Miguel Vargas, the master baker of the chocolate treat.

I was gifted with a box by Jecelle and Brian Tycangco, big fans of the Bucky. I, too, was thoroughly impressed. It’s a meticulously prepared product, packaged in a brown corrugated box with a green cord and a label indicating the date it was baked, the flavor and the batch number.

Miguel gives credit to his wife Raisa for the packaging, the look, the design.

“The only creative thing I contributed was drawing the logo on a piece of paper,” he says.

“She’s the one that pushed me and has been my constant source of support. I really couldn’t do it without her. We really make a fantastic team.”

Inside the box was a menu of all the variants and a pretty wooden spoon. Under the logo stamped wrapper was the Original Bucky—two gold bar-like chunks of chocolate topped with coarse sea salt. Dark, dense, chocolate-y, tempting!

I quickly cut myself some and, indeed, it was a chocolate bar, a classic chocolate cake, a flourless chocolate cake, cookie dough, tablea, a brownie, a crinkle and a cupcake all rolled into one.

It is not sweet, has a nice chewy texture and an addicting bite and mouth feel. It’s satisfying though not overly; a notch short of being sinful, which is why you keep going for it. It’s perfectly bitin, in a good way of course, the kind that makes you want more. It took half a bar for me to come to this conclusion!

The Original Bucky is a dark and rich chocolate flavor enhanced by sea salt. This is what started it all. Miguel had the recipe “in my back pocket since I was kid. A trip to a family friend’s house introduced me to the awesome pairing of salt and chocolate.”

Spiced is “an intense deep darkness followed by notes of cinnamon and ended by some heat. This was inspired by mom’s favorite cookies; a South American recipe supposedly as ancient as the Mayans. It’s cinnamon, cayenne and some other stuff. One of the more acquired tastes but definitely a must-try.”

Chunky Blonde is “a mixture of oatmeal and graham as the base, with chunks of cocoa liquor. Inspired by cookies my cousin Maiki Abello used to always make, and I’d crave for so badly. It has turned into my personal favorite.”

Buckies n’ Cream is “the original recipe with a vanilla cream. Some people have described it as an Oreo on steroids. This is my daughter Adriana’s absolute favorite.”

Super is something “I came up with for this country fair my cousin, Hindy (Tantoco), hosts a couple of times a year in Sta. Elena, called Balik Bukid. Inspired by her and what she’s been trying to push for, I decided to come up with a version that would be apt. It’s made with coconut sugar, gluten-free flour and chia seeds.”

Big Poppa was concocted for Father’s day. “I just thought of my favorite ‘manly’ flavors. It started with just being infused with bourbon, but quickly evolved into having a cream cheese filling and lots of bacon.”

Vargas has a day job working for a food ingredients company. While he is not professionally schooled, he has been a fixture in the kitchen, baking since he was a kid.

The Bucky came to be “because I wanted to give gifts last Christmas and not spend so much. I busted out the recipe and dusted it off, going through trial and error until it became what it is now.”

“My mom (Cedie Vargas) loved it so much that she gave them as gifts,” he adds. “Since we had to do costing and spend for packaging anyway, we decided to make a go of it.”

“Bucky is a nickname my cousin Bea (Tantoco) had for me when were around 10 years old. It was a time before I got headgear and braces,” says Vargas.

Best way to eat it

“Personally I love it cold, straight out of the refrigerator. But people have different ways of enjoying it. Some take a huge chunk, pop it in the microwave then serve it à la mode. Some cut it up and put some cookie butter. Some just like it straight out of the box.”