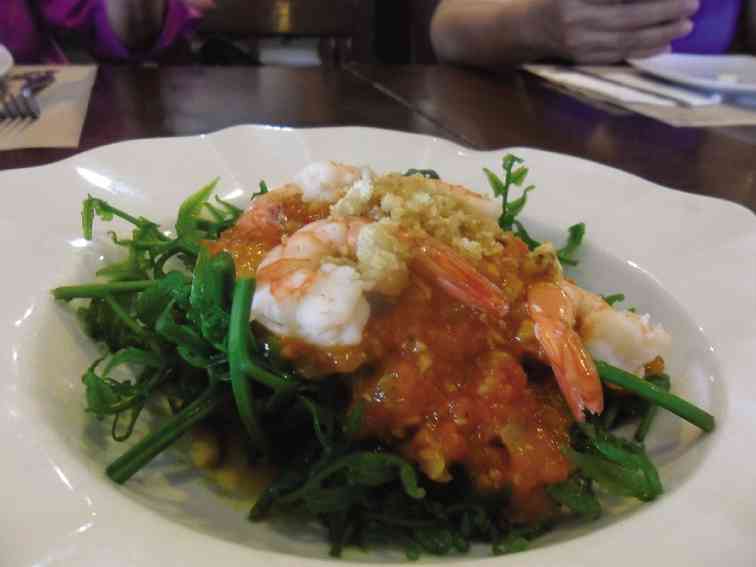 A road trip is always made more interesting if eating somewhere along the way is part of it. Coming down from Baguio, we made sure we left at a time that would allow us to be in time for lunch somewhere—in the former Clark Air Base in Angeles, Pampanga, to be exact, in a place called Binulo, which is “bamboo” in Pampango. (MA Roxas, tel. 6345-4992238).

Bamboo is meant to be the vessel of cooking for some of the dishes. We decided to have three of those. We were warned that the cooking may take time because of that. In fact, we hadn’t had time to settle down when the dishes began arriving fast.

Pako salad came first, the fern supply coming from a family farm in Magalang, Pampanga. While the proprietor, Maricar Angeles, wasn’t there to be interviewed, her representative, her mother Cila Angeles, was around to explain that many of the dishes were family recipes.

The pako salad dressing was her sister’s, the late Filo Batungbacal, whose daughter, Maricris Encarnacion, was with us that lunch. It had crushed fresh tomato as main ingredient.

Tomato is the souring agent for the pangat na ulang (river shrimps soup) which was served in its bamboo container. Ladling the soup from the bamboo container to the soup bowl provided a bit of drama. But the server knew how to do it without splashing.

The green contrast to the red shrimp was shredded mustasa (mustard leaves), which provided a touch of bitter, a good counterpoint to the sour. The Pampango name for river shrimps is buntukin, because the shrimp has a big head (buntuk) where all the flavor and fatty goodness reside.

When the second soup appeared—tinolang manok (boiled chicken)—we concluded that this soup must have been done beforehand since making chicken tender must have taken longer than the time it took from order to serving. The chicken could be cooked ahead in bamboo, then placed in the small bamboo servers.

But what does bamboo do to the flavor?

The result wasn’t that marked, but there was a smoky quality, certainly.

Chicken binacol in Panay and Negros are sometimes no longer cooked in big bamboo stewed standing on embers, but the flavor is nonetheless obtained by simply adding fresh bamboo sprouts called tangingking to the broth.

The method reminds me of other dishes cooked in bamboo. In Hagonoy, Bulacan, there was fishermen’s food of bangus and rice mixed in a bamboo piece, then sealed in mud and cooked in a hole dug near nipa palms heated with charcoal.

In Thailand, fish was also cooked in bamboo that was then thrown into charcoal embers.

Our T’boli guide in Lake Sebu used fish called ayungin inside a bamboo with shaved outer parts to make cooking faster. We also had kilayin, pork, and maybe some innards such as liver and lungs, which made for the tastiest sort of adobo.

We discussed whether it could be considered as such because it had the basic mix of vinegar (or other acids), garlic, salt and fat. The kilayin was perfect with binulon nasi, rice wrapped in banana leaves and also cooked in bamboo. The method made the rice taste more like suman.

As if to balance all that soup, we ordered some fried dishes. There was hito (catfish) with mustasa leaves and balo-balo (fermented rice), a standard dish in all restaurants serving Pampango cuisine.

My seatmate asked if I wanted to sandwich everything into the mustasa leaves, because all those elements had to be eaten together for one to get a complete taste profile. I told him I preferred eating all those with my rice cooked in bamboo, the balo-balo used as dipping sauce.

We had okoy as well, with grated kalabasa (squash) serving as a bed to fried shrimps. Then there was finger-licking adobong pugo (quail). And, as afterthought, pititian—fried pork rind with meat attached, or chicharon that was perfect and which, we were told, was properly eaten with atsara (pickled vegetables).

The pititian is served hot, so it is best to wait for it to cool down so it ends up more crisp.

We ordered sweets not to add to the fullness (which they did, anyway) but to have a respite from the other flavors in the mouth. We had pandan sans rival, the cake reminding me that the meringue layers should really be thin rather than the typical thick ones today. The turron had saba bananas and sweetened buko meat served with ube ice cream. Bucayong camote (sweet potato) was served with carabao milk (gatas damulag) with a bit of butter oil.

It was too bad that owner Maricar Angeles wasn’t around, but her cousin Maricris gave us her background.

Maricar belongs to the Tancungco family whose members take pride in being discerning about food and who are good cooks as well. She graduated with a Hotel and Restaurant Management degree from the University of the Philippines and opened Amagi, the first eat-all-you-can Japanese restaurant in San Fernando, and Ryan’s Diner and Hong Kong Dimsum in Angeles, all in Pampanga. She also set up a Filipino restaurant, Aleyas, when she resided in California.

So now we have another place to cap our trip home from Baguio.