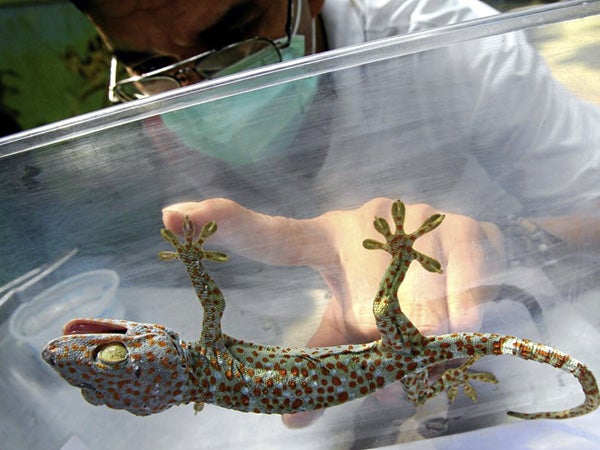 ‘Tuko’ and other folk remedies

Do a Google search on “tuko” (gecko lizard) and you’ll find numerous ads from sulit.com.ph and similar online buy-and-sell exchanges.  The cheapest I saw was an offer for a kilo of tuko for P15,000, supposedly with 23 pieces.  The most expensive was an ad for 3 tuko at P100,000 each.  One ad even had a video showing a huge tuko, bigger than terrier dogs.

The demand for the tuko soared after rumors that it was a cure for AIDS attracted Chinese and Korean buyers.  It’s a rumor that the Department of Health has tried to squelch, together with older claims that the tuko, as well as its more common relative, the butiki (house lizard), are supposedly good for asthma.

We often associate traditional medicine with plants, but there are also cures – particularly in China, Korea and Japan – that use animals. I’m enclosing “cures” in quotation marks because the claims are highly questionable. Yet the demand for these vaunted therapeutic animals has become so huge that in many cases the species concerned are now endangered.

Or, as in the case of the tuko, the animals are not yet considered endangered but because they are being hunted down, could eventually end up on the list of species that need to be protected.

Several bills have been proposed, nationally as well as locally (in Batangas, for example, by actor and Sangguniang Panlalawigan member Christopher de Leon) to ban the hunting of the tuko.  The Customs Bureau has also cracked down, at least by banning its export, since the tuko is now considered as valuable as black coral.

Many of these “medicinal” animals have very general claims on health… and virility.  It’s amazing how many kinds of male animals’ genitals make it to the list, the most well-known being bull penises and testes, made famous in the Philippines by “Soup number 5” being offered in some Chinese restaurants.   Balut, described as “fertilized duck egg,” is also considered an aphrodisiac.

Other animal cures are more exotic, both in terms of the source and the claims.  Turtles are in demand supposedly for longevity.  The more exotic animal cures among the Chinese include deer penis, deer musk, starfish, snakeskins, tiger bones, rhino horns and bear bile.  The last three have become very controversial because they involve endangered species.   The bear bile marketing is considered the most cruel, because the bears are raised in captivity, and their bile extracted while the animals are still alive, causing them great pain.  Bears are also slaughtered for their paws.

One seemingly innocuous cure has also created problems for the Philippines because we are one of the main sources for this trade that involves some 250 tons of a particular species a year.  This is the seahorse, which is used for kidney ailments.  Walk into a Chinese drugstore and you’ll still see dried seahorses and starfish.  The seahorses are now said to be farmed in Hainan, China but some still come from the seas, mainly from the Visayas.

Our own Filipino traditional medicine does involve some animal products.  There’s the common butiki or house lizard, used for asthma.  Others are more exotic and are often sold in Quiapo.  A popular one is apdo ng sawa or snake bile, with all kinds of cure-all claims.  Another one, and I can never forget how the grandmotherly vendor told me what it was without batting an eyelash: titi ng buwaya or crocodile penis.  When I asked what it was for, she retorted, “Ano pa?!” (Without saying the exact words, her tone implied: But what else if not for virility and staying power?)

You’d think men are crocodiles enough without having to take the penis as a medicinal product, but many of the claims on medicinal animals are nonsensical and are based on the exotic provenance of the cures.

In other cases, the claims are based on magical associations around the animal, e.g. this medicine must be strong since it comes from the bear.  And really now, do you think titi ng daga (rat’s penis) will have any buyers?  It just had to be the huge buwaya.

A romanticized view of traditional medical systems is that these emphasize harmony, “natural-ness.”  Yet the use of animals for medicine involves environmental destruction and cruelty to the animals.  As the numbers of these animals dwindle, we lose part of our natural heritage.  Seahorses, for example, are intriguing animals, since it is the males that get pregnant, incubating the young in their bodies.   The tuko, besides its intriguing calls (tu-ko!), functions as natural pest control since it eats mosquitoes.  They’re better helping to prevent diseases rather than being consumed as dubious cures.