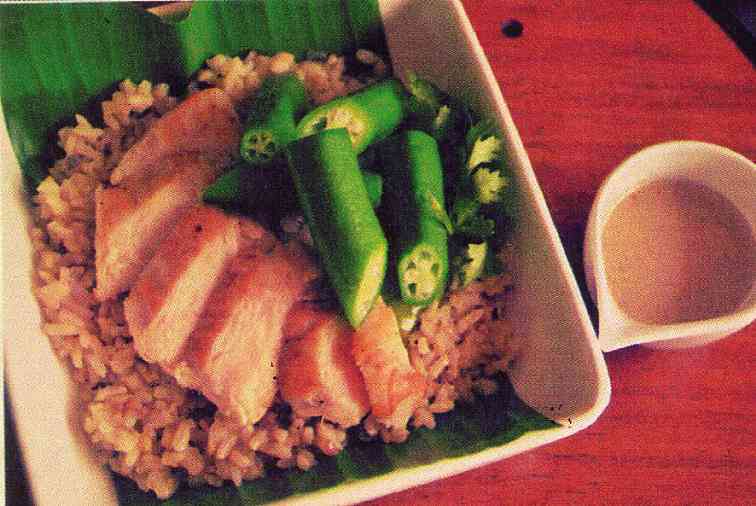 World Food Day focuses on the goodness of brown rice

The lunch was all about brown rice.

There were several dishes using this unpolished, organic, rich-in-fiber rice variety. They were cooked by chefs and non-chefs, the latter a motley group of entertainers and those who work in that industry—singers, actors, filmmakers, songwriters, TV hosts. Each one introduced his/her contribution that day and why he/she eats brown rice.

While the spiels were short, the audience still couldn’t wait to taste the food.

The event at the Peta Theater Center in Quezon City was to celebrate World Food Day and to launch the new Oxfam calendar for 2014.

Oxfam was founded in Oxford, England, in 1942 to offer solutions to famine. It has grown to be an umbrella of organizations that works to alleviate poverty and injustice. Last year, I was part of the calendar that celebrated women who worked to provide food to sell and food for their families.

This year was a much more “entertainment-focused” launch. Last year, the entertainment was provided by women who were also farmers, fishers, seaweed gatherers and peanut growers; they shared stories of coping amid poverty and their way of multitasking.

But this year’s launch was as well a chance for me to know the names and faces in the making of digital movies, those who rock our comedy bars, and who render their songs about advocacies they espouse.

The advocacy that day was about going back to eating brown rice, which made me recall the “Vanishing Food Symposium” eight years ago, where Rhoda S. Lantin read her paper on how healthier brown rice got replaced in the Filipino diet by milled or white rice when rice mills were introduced in the 1950s.

Sixty years hence, white rice is the grain of choice—the purer and more aromatic, the more expensive. Brown rice has been relegated to below desirable, a poor substitute for white rice.

But promoting brown rice today has so much going for it.

First, it complies with the trend of eating healthier because the grain still has its bran layer that contains fiber, vitamins, minerals and protein. This is what’s called the “tiki-tiki” layer, and those of us of a certain age will remember the advertising jingle of a drug company’s bran-rich vitamin supplement.

Second, because most of the brown rice marketed is grown organically, it projects the positive image that its growers practice sustainable farming (no pesticides, no chemical fertilizers).

And so we got our forks and spoons ready to sample brown rice in its many cooking variations.

Restaurateur and chef Myke “Tatung” Sarthou flavored the rice and accompanying chicken with coconut milk; it was so good that it made me line up for seconds.

The red rice lugaw (porridge) was topped with two kinds of mushrooms flavored with Gochujang paste (hot pepper sauce), a recipe of Denise Celdran who serves it in her restaurant Edgy Veggy in Pasig.

Singer-songwriter Aia de Leon made an oven-baked layered rice enriched with chicken, grated cheese, vegetable and bread crumbs that she called “Thank You, Amen!” She said that she switched to brown rice because it helped ease her stomach acidity.

Live-wire actress Tuesday Vargas marinated chicken in garlic lime sauce, then grilled and finished cooking it in the oven. She served it with mango salsa and brown rice. A food blogger, she studies at the Center for Culinary Arts, so expect more recipes from her.

Singer-songwriter Bayang Barrios said she grew up eating brown rice, and cooking the dish reminded her of home in Agusan del Sur. Her fried brown rice was flavored with butter, onion, garlic and oyster sauce. She paired that with pinaupong manok, not quite the classic steamed chicken seated on a bed of salt, but more like roasted chicken lying on its side in a turbo broiler.

With the meal was brown rice coffee from another singer, Nityalila Saulo, who made it by roasting the rice, then boiling water with it. That’s probably better than all those decaffeinated drinks.

All these dishes have their recipes in the calendar.

It is hoped that with more people eating brown rice, its price will go down. White rice is cheaper at this point since more people buy it. And to think brown rice needs one less step in processing (polishing), thus less fuel consumption.

Another thing I learned that day is that red rice and black rice are also considered brown rice as long as the grain is unpolished.

Of course, I didn’t really need convincing because I have been eating brown rice (and red and black) for some years now. I like its nutty quality, especially the one my sister buys from her acupuncturist’s clinic.

One good step is for restaurants here to offer a choice of brown or white rice. On my recent visit to Bangkok, a hotel did exactly that with its breakfast congee.