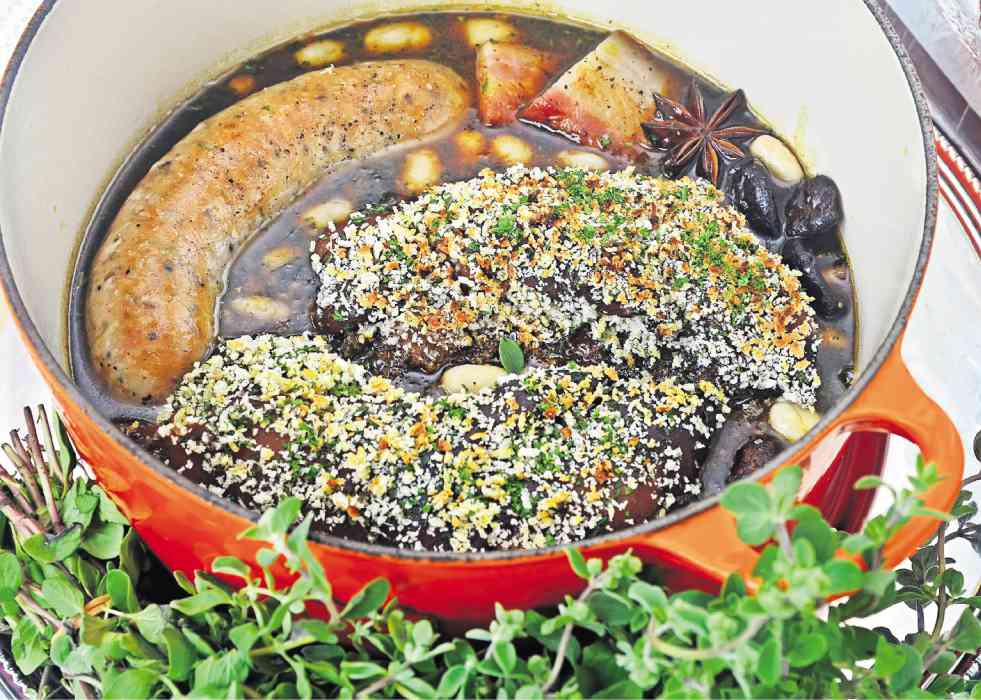 Who says adobo can never be classy and served with sophistication?

Here’s a gourmet take on the pork adobo, made sosyal with a bit of French and Chinese influences. It’s a freestyle kind of stew but combined with the important adobo components—vinegar, salt, garlic, bay leaf and pepper.

The taste comes out more pronounced, sharp and heady, with a nice sweetish aftertaste.

But, the most striking part of this quintessential dish is the use of pork trotters, instead of the typical pork belly.

Pork trotters or pig’s feet are cooked slowly over low fire for a long period to guarantee tender meat. Once the meat falls off the bone, it’s ready to be served.

“I use pork trotter in my adobo because once it’s cooked, it becomes sticky and gelatin-y and helps thicken the sauce delightfully,” says Tanco of the famous Bizu Patisserie.

If you like to dish out the stickiest, tastiest, oiliest and fattest kind of adobo, use pork trotters, says Tanco. You may also use trotters alongside other pork meat for a rich, thick sauce.

“That’s the real secret of a tasty, thick adobo sauce,” says Tanco. “I like it when I’m eating adobo and my lips get stuck because it’s so sticky and tasty at the same time.”

Pork Trotters Adobo is prepared like a French casserole, served in a large, deep saucepan with pieces of meat, various herbs and spices, liquid (beer) and crunchy topping (breadcrumbs).

It’s then simmered over low flame for hours.  Tanco says four to five hours of simmering will do until the meat is tender and juicy.

The sauce and beer reduction method is very French.

“As a Chinese, I got the technique from my mom the way she would cook the patatim, but I did a little tweaking. I cook it in beer and pineapple juice, and simmer with onions, garlic, allspice and star anise. It’s more like adobong pata casserole,” she says.

Instead of wine, she adds Pale Pilsen to neutralize the overall tangy flavor of the casserole. And Tanco suggests adding  dried Szechuan chili pepper to give the dish more kick.

This adobo calls for no soy sauce. The dark color comes from the caramelization of white sugar just before all the ingredients are put together, lending the dish a nice burnt-sugar tang.

Tanco encourages cooks to be more resourceful and adventurous with ingredients—chorizo or sausage, mushrooms, beans, bacon and longganisa.

“It’s a very rich food,” she says. “You can eat it with rice or bread. Or you can make cuapao with  adobo filling. It’s a complete meal in itself. The pork trotters are so rich that you would want to tone it down a bit with the breadcrumbs.”

With the thick, sticky sauce, this adobo is pretty messy to eat because you have to use your hands to eat the knuckles. But it’s worth it. Trotters are very tasty because that’s where all the flavors go.

If you have leftover adobo sauce, Tanco suggests you turn it into pancit sauce.

“You wash the pancit bihon, put a little water in a pan and let it boil,” she says. “Then add adobo sauce and mix well. That’s another dish.”

You can make a big batch of Pork Trotters Adobo and store in the freezer. As everyone knows, the longer you keep adobo, the better it tastes.

Tanco started cooking when she was in third grade. Every summer with her older twin sister and two other sisters, they  would enroll in cooking classes conducted by an Italian lady in

Bel-Air, Makati City. They learned how to make different kinds of pasta from scratch—ravioli, fettuccini, etc.

Tanco took up Communication Arts in college and got married afterwards. In 2000, she enrolled at the Center for Culinary Arts, Manila simply because cooking was her first love.

“I used to have a garments factory which I closed down,” she says. “Then, I realized I had nothing else to do. So, I started  cooking, because it was really what I love. It’s like second nature to me.”

She also took up Entrepreneurship at the Asian Institute of Management, “which helped place things together,” she says, including the birth of Bizu Patisserie.

In a blender, place all ingredients and blend until well-combined. Set aside.

In a sauté pan, heat oil and add sugar. Allow sugar to slowly caramelize. Once light brown in color, add pork and constantly stir until well-coated with the caramelized sugar and meat has browned a bit.

Transfer caramelized pork trotters to a casserole and add the blended liquid mixture. Add in allspice and star anise. Add a little water to cover the pork trotters. Top casserole with a lid and allow to simmer in low heat for about four hours.

In a sauté pan, heat oil and sear longganisa and bacon. Transfer to the casserole and finally add vinegar and white beans. Remove lid and allow to simmer until sauce has thickened. You may adjust the seasoning by adding a bit more sugar, salt and/or pepper. Finish with chopped parsley and bread crumbs.