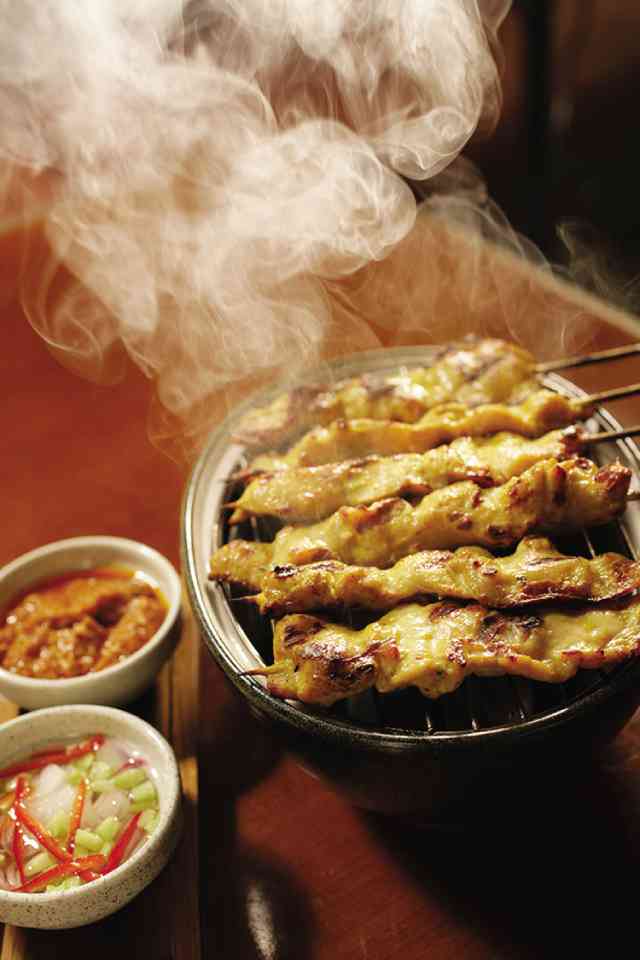 A Thai food tour beyond the oft-trodden ‘touristy’ path

Pitaya Phanphensonphon, owner and CEO of the Mango Tree and Coca resto chain in Thailand, shows us what authentic Thai cuisine is, from sourcing ingredients to actual cooking

I took us a ride on the SkyTrain, then a hop on the ferry on the Chao Phraya river of Bangkok, to get to our destination. It was necessary, we were told, because of the protest marches on the main roads and was faster than a van negotiating to get to the market that we were to explore.

Our guide and host was Pitaya Phanphensonphon, owner and CEO of the group of restaurants known as Mango Tree (Thai) and Coca (Chinese). He wanted to show us a real market, not the “touristy” one. Pak Khlong Talat market is a wholesale vegetable place, what we call “bagsakan” in the Philippines, literally where dealers drop their goods.

This is where eateries in Bangkok get their vegetable and fruit supply, and the flowers that decorate their tables. The place was bustling with motorcycles; the seeming chaos reminded us of Divisoria.

The vegetables and herbs were fresh, green and fat. Coriander (wansuy) still had roots, which is important to Thai cooking. Winged beans (sigarilyas) were huge; yard-long beans (sitaw) were tender; flowers of garlic chives (kutsay) were firm.

The next step was to cook what we bought. Pitaya led the way to what he called his R&D kitchen, on the third level of the Coca restaurant in Surawong. Ingredients were laid out and each of us had an assignment. Mine was to chop shallots and garlic with an Australian journalist, who turned out to be a retired chef. Well, you now know who chopped faster and better.

In his book “I Am Not a Chef,” Pitaya says he loves to do simple dishes creatively. And he encourages his chefs to do as well. We were to taste their cooking through the four days of our visit.

Meanwhile, back to our late but great lunch: appetizer was a crab dip with rice crackers, very much like the khao tang na tang we love; grilled prawns served in a salad with Thai herbs; snake-head fish (pla chon) shredded and pounded, then mixed with crab meat into a yellow curry done from scratch, then poured over rice vermicelli.

There was slow-roasted pork with a chili vinegar sauce. Dessert was assembled when we were ready to eat it—vanilla ice cream with noodles made of green mung bean.

As with all our dining in Pitaya’s restaurant, wines were served, showing us that Thai or Chinese food can be paired as long as you know how to do it.

Pitaya’s parents started Coca, a Cantonese Chinese hot pot restaurant, in 1957. When Pitaya took over, he insisted on his way of running the restaurant, resulting in conflict with his parents. It could have been because he studied in Canada and imbibed Western ideas.

When he retires, he says he doesn’t want any friction with his own children over business.

We have heard our Thai friends tag their Chinese restaurants as Thai-Chinese, and so it is with Coca (Chinese for delicious). But the dinner degustation we had on our first night at the Siam Square branch  showed other influences in the menu.

Shrimp dumpling was served with salmon roe. There was bun filled with barbecued pork, sweetened with honey. Abalone was served on top of a sweet tart. Suckling pig was cooked Macau-style, which is a bit sweeter. Shrimp mixed with pork then stuffed back into the shrimp shell is a signature dish, we were told.

Chawan mushi prawn was next. Goby was deep-fried and served with soy sauce, and so was Chinese broccoli.

Our favorite was the winter dish of rice steamed with chicken and Chinese sausage.

By the time dessert of pastry with custard and buns with salty egg custard was served, we were so full and thought only of crawling into bed.

Mango Tree is Pitaya’s way of promoting Thai cuisine around the world. It has branched out in the United Arab Emirates (Dubai), Japan, Malaysia, England and the Philippines.

Mango Tree started in a house of Pitaya’s family’s neighbor who asked them to look after the place because they were going to stay abroad. Pitaya asked if he could convert it into a

restaurant and promised to maintain the structure. The mango tree in front is still there.

Our Mango Tree tasting featured innovations with traditional Thai cooking. While Thais don’t eat lamb, Pitaya serves it for his international diners—char-grilled and with a northeastern regional Issan dipping sauce.

Lobster and scallops, instead of just river prawns, were added to a yellow curry dish.

Chicken satay is served in a dramatic way on heated grills. Beef is wagyu cooked in a spicy soup, heated on individual sterno.

We appreciated that an almost forgotten Thai dish of watermelon with ground sweetened fish was revived.

A trio of desserts had the quintessential mango with sticky rice, lychee on top of black sticky rice pudding, and strawberry with chocolate.

As if to say there’s more to eating in Bangkok than just at his restaurants, Pitaya brought us to taste the beef noodle soup of Watana Pannich, a 50-year-old restaurant where the huge pot in front boils incessantly and will only be cleaned, according to the owner’s granddaughter, once a year during the spring festival.