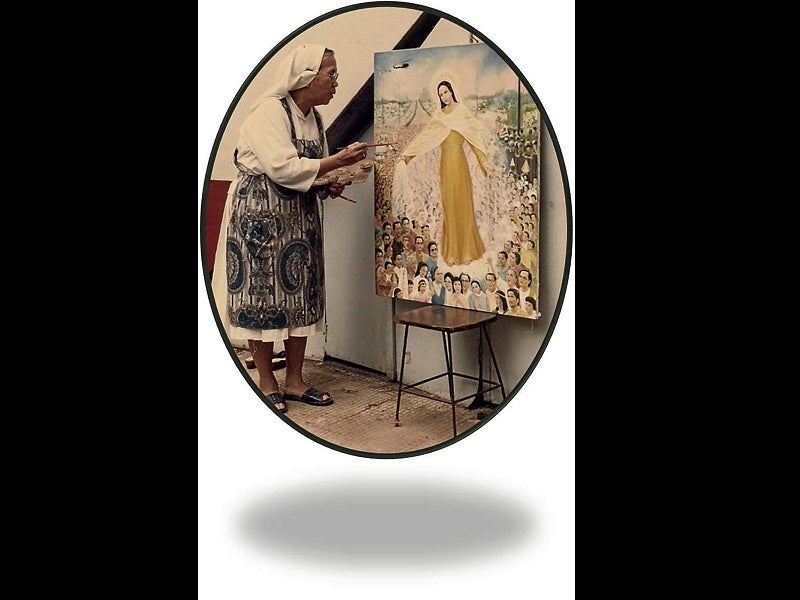 Painting the world beyond

Printed stampita-size versions of a painting of EDSA People Power of 1986, with the figure of the Blessed Virgin Mary dressed in yellow, went around during that time when most Filipinos were aglow with patriotic fervor. The original painting was later presented as a gift to the then newly-installed president, Corazon C. Aquino, the widow swept into power by an almost bloodless uprising.

Fortunately, an almost exact version of the painting exists, plus or minus some faces that were in the lost original version.  This version was done by the same artist and is in the possession of the Franciscan Missionaries of Mary (FMM), the congregation to which the artist belonged.

The artist, Sr. Elisea Quinto, FMM, went to the Eternal Art Gallery in the Sky in 1993, but she left behind a body of work that speaks of her fervor for her art, and most of all, for her calling to the Franciscan way of life.

The FMMs recently mounted an exhibit of Sr. Elisea’s paintings as part of their preparations for the celebration of 100 years of their presence in the Philippines. Founded in 1888 by a brave and charismatic French nun named Mary of the Passion, the FMMs had their beginnings in the wilds of India. The first batch of FMMs arrived in the Philippines on Dec. 10, 1912, part of the stream of arrivals of Catholic missionaries, mostly from Europe, in the early 1900s. The missionaries became involved in various apostolic ministries.

The opening of the pre-centennial exhibit also featured the launching of Sr. Elisea’s book of paintings, titled “A Flame of Fire.” The title is a translation from French of a line in a prayer of the FMMs’ foundress: “Make my heart and the institute a flame of fire which will embrace the whole earth. Cleave this flame Yourself.”

A total of 48 paintings in oil and acrylic by Sr. Elisea are included in the book. But not all were available for showing at the exhibit. For example, the life-size portrait of the late Rufino Cardinal Santos (1960) that hangs at the lobby of the Cardinal Santos Medical Center could not be borrowed.

Sr. Elisea’s paintings belong to a certain art genre that could probably be described as “religious art.” These are not naïf art at all. But one cannot miss the innocence that pervades many of her prayerful renditions. The nun deliberately hewed close to the prayer-book art of yesteryears.  Her saccharine works would give critics a toothache.

But the bright celestial scenes ooze with symbolism. These must be Sr. Elisea’s idea of the so-called beatific vision. Lots of clouds, doves and lilies.  Cherubim and seraphim galore.  No laughing or angry Jesus meant to jolt or stun.  And the only street scenes are in one painting that shows the Child Jesus handing bread to a crippled child on the street of Nazareth circa 10 AD, and the EDSA highway people power scene circa 1986 AD.

Jesus and Mary, Franciscan saints and martyrs are common in Sr. Elisea’s paintings.  She did several of Sts. Francis of Assisi, Clare and Anthony, and painted the FMM sisters who were martyred in China during the Boxer Rebellion (among the many canonized by Pope John Paul II before he died in 2005.)

Most of Sr. Elisea’s paintings are huge and hang mostly in the halls of religious houses. Many paintings are in FMM convents. She painted several Last Suppers.  Her huge “The Annunciation” (1950) is the backdrop of the altar at the FMMs’ convent in Tagaytay. “St. Francis Preaching in the Woods” (1959, 359” x 68”), is at the lobby of the FMM-run Stella Maris College in Quezon City.

The FMM sisters think there might be other paintings by Sr. Elisea out there, and wish that they knew who the owners are.

But painting was not Sr. Elisea’s main preoccupation in life.  Sr. Emma Fondevilla, present head of the FMMs in the Philippines, observed that Sr. Elisea was “first and foremost a missionary.”

A short bio in Sr. Elisea’s book describes her thus: “Open to the Spirit and to the signs of the times, she served the poor with great sensitivity and compassion. She was actively involved in various ministries: in the prisons, relocation areas, medical clinics and feeding centers.”

The FMMs recall that Sr. Elisea did creative work in solitude and mostly in the stillness of the night after she was done with her varied chores during the day. Her paintings, her sisters say, are indeed “the fruits of her contemplation and missionary dynamism,” and her personal depiction of a world beyond the here and now as we know it. •