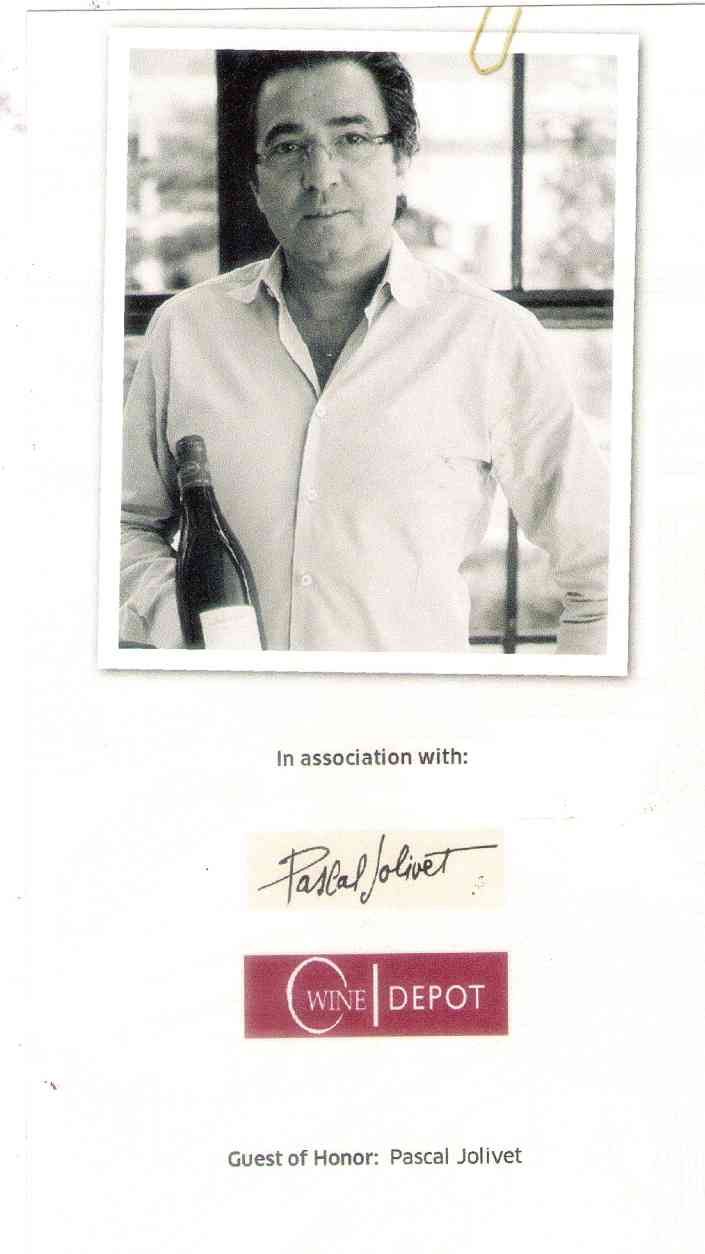 Leave room for the wine 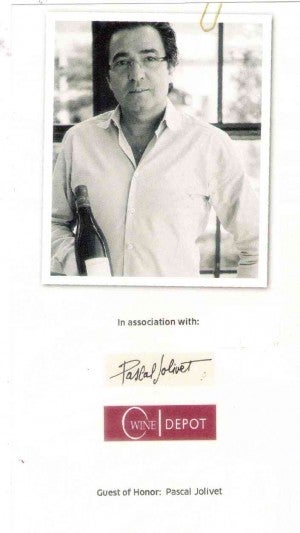 New Year fo the family involves appetizers or tapas, delectable hams and classic cheeses more than big dishes, because we have to leave room for wine. Many times the recommendations are from my tastings throughout the year, or those that have become favorites from past wine events.

A recent one was a sit-down dinner with wines from the Loire Valley. The owner and winemaker, Pascal Jolivet, was there himself, not quite the rotund man we expected from the winery’s website, but slim and looking like quite the bon vivant rather than harassed.

“I hate that picture,” he told us. Obviously, he hasn’t told his staff, because that same photo is still up last time I checked. But it is the Jolivet website that gave us an idea of the wines we were to have.

Loire Valley is known for its Sancerre and Pouilly-Fume wines. The winemaker started only in the 1980s, quite new to the industry if we are to go by many French wineries that have existed for centuries. The write-up has the buzzwords of today’s wineries like natural and biodynamic. In general, the wines are fruity and crisp.

If you are looking for wines which fit our weather, Pascal Jolivet has Attitude Sauvignon Blanc 2011 and Attitude Rose 2012 that should be perfect, quite refreshing. They are priced moderately and available at Wine Depot outlets (Nicanor Garcia and Yakal in Makati City; Greenhills; and West Gate Alabang).

Jolivet believes that “wine is a beverage meant to complement food.” And so, for that evening, we had to pair his wines with food from the tantalizing array at the buffet of Sofitel Plaza’s Spiral. Chef Frederic Cyr suggested the dishes in our menu cards.

For the Sancerre 2012, we headed straight for my personal heaven, the ham and cheese private room or L’Epicerie, where we had goat cheese from the Loire Valley (Crotin de Chavignol), then proceeded to the Japanese section for sashimi and sushi and seafood on ice. For the Pouilly-Fume 2011, the recommendations were mostly fish—grilled mahi-mahi, Chinese shrimp dumplings and Japanese teppanyaki.

Grilled meat selections and a Peking duck were recommended for the Attitude Pinot Noir 2011, including two kinds of cheeses, Bersola and Columbier.

All that running around cleared my head for the next wines, but the exercise didn’t alleviate the fullness. By coffee, it was late and we had no chance to speak with Jolivet. Never mind; his wines did the talking, not in the way you’d expect connoisseurs would do it (e.g. aroma, hints of hay and all that), but each enhanced the food we ate more than just complemented it, as Jolivet wanted. The wines, traveling through the buffet and sharing food certainly encouraged camaraderie.

Discovering new wine is as great as rediscovering wines that have become old friends, like Chapoutier from the Rhone region of France. Tita Trillo of Titania has been the distributor for years now, and much of my wine knowledge came from tasting Chapoutier wines.

I remember how, at a past tasting, we were introduced to one important feature—labels that have braille markings.

The tasting was made possible again at Sofitel’s La Veranda. It was a Belleruche, a Cote du Rhone white that was paired with a seafood and fish curry—quite a feat, and good to know that the pairing is possible.

The lamb shank must have been braised with the Rosteau, a Cote du Rhone red, which we also drank. For the mille-feuilles, layers of crisp puff pastry interspersed with brie and Roquefort, it was Les Meysonniers, Crozes Hermitage.

And finally for ice cream and chocolate, it was the La Bernadine, Chateauneuf du Pape, a wine from Avignon which was the summer residence of the popes in the 15th century.

But a “bubbly” is always expected to cap this year and cheer the New Year. Many of us settle for Italian Proseco because champagne can be quite expensive. But I discovered a rather reasonable but excellent champagne during the dinner at Alliance Française, celebrating the inclusion of the French Gastronomic Meal in the Unesco Intangible Cultural Heritage of Humanity last year.

This is the light, refreshing, sparkling Burgundy wine, Charles de Fere Chardonnay. It’s value for money and is recommended by Bernie Sim of Alliance Française and the International Wine and Food Society.