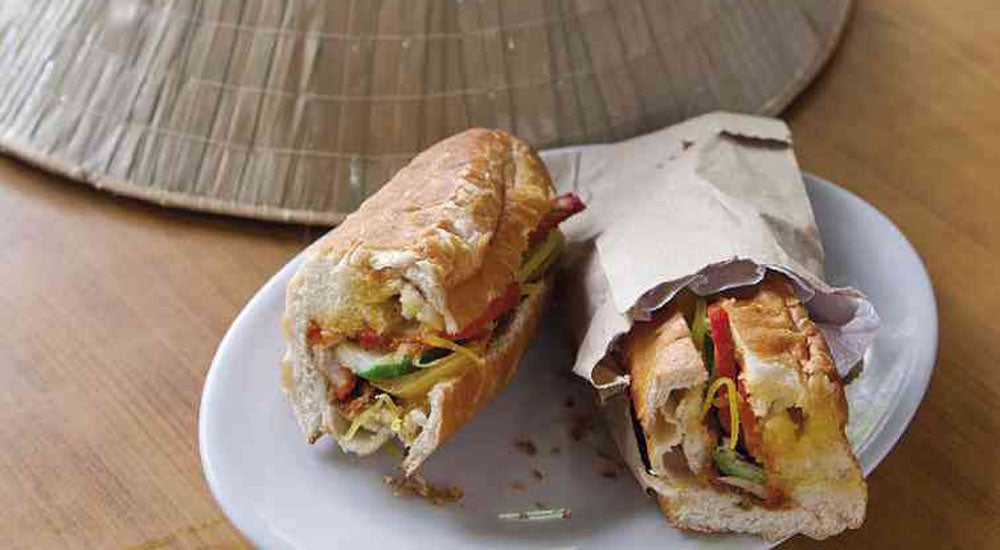 Vietnamese cuisine gets acculturated in Palawan

All that remains of the Vietnamese refugee camp in Palawan is a big hut that spells out “Vietville” at the entrance. But that’s not accurate. In the kitchen, there are two elderly Vietnamese ladies who cook the food served at the restaurant. And our waiter, “Jojo,” as he likes to call himself, is also Vietnamese.

I had so wanted to go to the camp during my first visit in the last decade of the old millennium. I wanted to see the herbs planted for the ingredients used in the cuisine such as sawtooth, mint and basil. But, at the time, the place was too far off downtown Puerto Princesa.

Fortunately, on my recent visit to Palawan, Vietville was on the way to Daluyon Resort in Sabang, our group’s final destination. Our host, Butch Tan Jr., wanted us to taste what is now part of Palawan’s cuisine.

Jojo introduced us to his mother, Le-thé Ngoc Minh, who was still doing her prep for the fresh lumpia (goi cuon) which we would have as appetizer. His aunt, Pham thé Anh, learned to cook from his mother, and the elderly duo did their Vietnamese dishes we had ordered. Most of the dishes were familiar to me, having ordered them at restaurants in Manila and in Ho Chi Minh City.

We had two soups because we needed a stomach-warming first meal. The pho bo (beef noodles) was like a warm welcome to the province and a spirit-reviving dish, after the stress of travel and no proper breakfast due to the early morning flight. The other was a shrimp sour soup like our sinigang.

There was pork barbecue (thit nuong) and lapu-lapu in tausi, which, taken with rice, were quite filling. And to think we had another carbo loading because we just had to have the French bread with roasted pork (banh mi thit).

The French bread is baked by Jojo and we were so impressed by the texture and taste that we ordered some to take home. We were to pass by for the bread on the way back to the town from Sabang. Just place them in the freezer, Jojo said, and it can last a long time.

The bread didn’t last that long because the boys at home couldn’t get enough of them. But friends who got their share of the bread said it was still good after two months.

I remembered another visit to Puerto Princesa when tricycle drivers told us that they liked to eat at Vietnamese restaurants because the food was cheap. One of the drivers brought us to Bona’s Chao Long Haus and Restaurant. It was one of the oldest, opened in 1995 by Nguyen Lan, who migrated to the United States after he sold the rights to the Bona family in 2000.

Chao Long turned out to be pho with its noodles, but the soup was orange in color because a daughter-in-law of the Bonas gave it a Chinese twist. The thing is, chao long is Vietnamese porridge, so the name is wrong. We asked Jojo of Vietville to explain, but his answer did not clear things up because he said the name came from Filipinos who said the soup was “Chow lang,” (only food).

Vietville Restaurant opened in 1996. Outside the dining area, what remains of what must have been a big camp are a smattering of houses, a gazebo that honors the Virgin Mary, and another one farther down that has a Buddha statue done by former Vietnamese camp habitués.

The elderly ladies in the kitchen told me that they sailed from Saigon on an American navy boat. One of them married a Filipino journalist she met during the Vietnam War, and she spelled out his name on my notebook. That’s probably why she decided to stay on.

Jojo’s mother seemed to like living in Puerto Princesa, and so made the temporary arrangement permanent.

The two cooks both have two children, who, we hope, will learn to cook from their parents and keep alive the lore that, once upon a time, there were Vietnamese refugees in Palawan.

There’s more of our Palawan sojourn next week, including Sabang that is near the Underground River. But, for me, the main attraction is Filipino food, Palawan dishes that were a surprise to find in a resort.