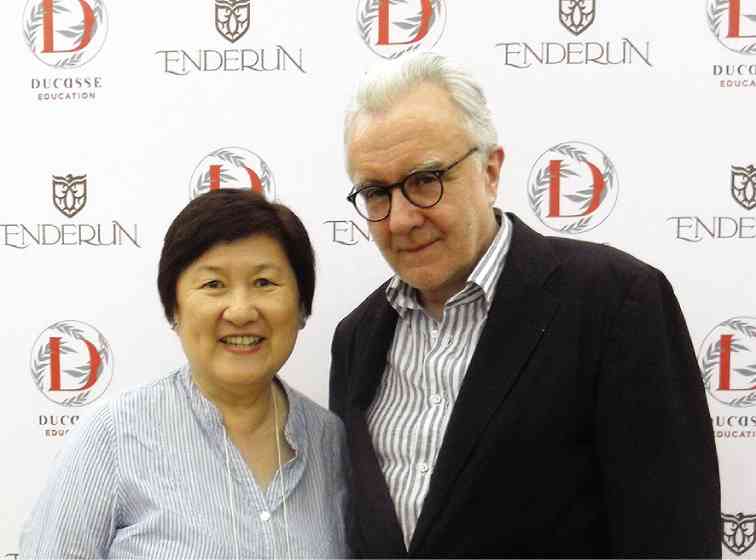 THE AUTHOR with chef Alain Ducasse

Alain Ducasse looked none the worse for wear after his gruelling trip. He arrived in Manila Monday morning from France, took lunch at Enderun Colleges and faced both the student body and the media by 2:30 in the afternoon.

For those in the culinary field, Ducasse doesn’t need any introduction. But just to give a short background on the chef: He is French but is now a citizen of Monaco (a Monegasque); has 25 restaurants in nine countries and will soon open one in Russia; has earned a total of 18 Michelin stars for his restaurants; was given a Lifetime Achievement Award in 2013 by the World’s 50 Best Restaurants Academy; and founded the Ducasse Education that provides culinary training to people from all over the world aspiring to be like him.

This is Ducasse’s second visit to Enderun Colleges, which is the first Ducasse Institute outside France. While the first visit was to meet with his partners and students here, this trip was to launch a Diploma in Culinary Arts-Chef de Partie, a course open to those who have had a culinary degree or have worked for two to three years in professional kitchens.

It was also to check on a project where the Ducasse Institute Philippines gets to train streetchildren of the Tuloy Foundation to become culinary professionals. A charity dinner for the Tuloy Foundation program on Tuesday was prepared by the Ducasse ambassador chefs headed by Jerome Lacressonniere, with executive chefs Cheong Yan See and Marc Chalopin.

Another charity work in France that Ducasse and his school participate in involves training disadvantaged women, mostly immigrants from Africa, in French cooking techniques. When asked whether one can apply French techniques to African cooking, Ducasse assured us that basic French techniques can be applied to any cuisine. He mentioned how two women in the program are now working in the French Prime Minister’s kitchen.

It has been three years since his first visit to Manila, and he has noticed changes—the city and the school got bigger, and the cooking has changed into something more accurate and refined, he said. Then he acknowledged how competitive the culinary field is, both in education and in business, though it also stimulates people to do better.

During his first visit, as we had our picture taken, he whispered basically the same observation to me.

When his restaurant Louis XV celebrated its 25th anniversary in November 2012 in Monaco, about 250 chefs came for the celebration. He said that over that weekend, those chefs cooked 100 different dishes using 250 different products from the local market—“beautiful game and fish and local produce”—with each chef using his or her own techniques. The Chinese chef cooked lamb his way, for instance—though Ducasse didn’t give any details.

The anniversary was more than just a fete; it was an opportunity to invite those top chefs to be a part of the Ducasse Institute and share their expertise.

Because it was mentioned that during the anniversary some chefs cooked “haute  street food,” I asked Ducasse at the press conference what exactly that meant. I was hoping he could give an example of what was served. But all he said was, there are street food that are good and some that are bad. I took that to mean that the good ones can be considered “haute” or skillfully prepared, something you can expect from top-world chefs.

Later during our one-on-one interview, he noted that it takes more than just skill to make “fantastic street food.” He says it is “about personal involvement and the sentiment that the cook gives to his food. It should be prepared from the heart.”

And then he looked amused as he revealed that while street food is the trend in North America, Paris is about five years behind.

One culinary adventure he recently had was the September 2013 Mistura in Peru. It is a food festival that features Peruvian ingredients and cooking. He said he was amazed by the number of people who attended—about 50,000 in one of the festival days. Many of his contemporaries were there, so it was also a good way to discuss and exchange ideas and meet people over a short lunch.

“Face-to-face talks are something to preserve. It is still better than e-mails,” he said, adding that “one should spend time meeting people, talking with them and learning.” Which is why he doesn’t believe that fast food is taking over, because it doesn’t lend itself to people gathering “around good food and good wine, [to] talk over a good meal,” whether haute cuisine or more simple fare.

There was another term that needed to be cleared. “Bistronomy” was also mentioned in one of the write-ups on Ducasse. He explained that it’s a new way to call a contemporary bistro as

against a classic bistro, both in terms of the food and in the setting.

In France, he said, there is a hierarchy of restaurants, and the bistro has its own place in that hierarchy. He asked if I’d been to France; when I said yes, he said I should go again to eat at the different kinds of French restaurant (e.g. café, bistro, brasserie) and know the differences first-hand.

Ducasse then directed chef Jerome Lacressonniere to make sure that I would experience all that should my trip materialize. Both of them looked amused as chef Jerome agreed to the Ducasse directive.