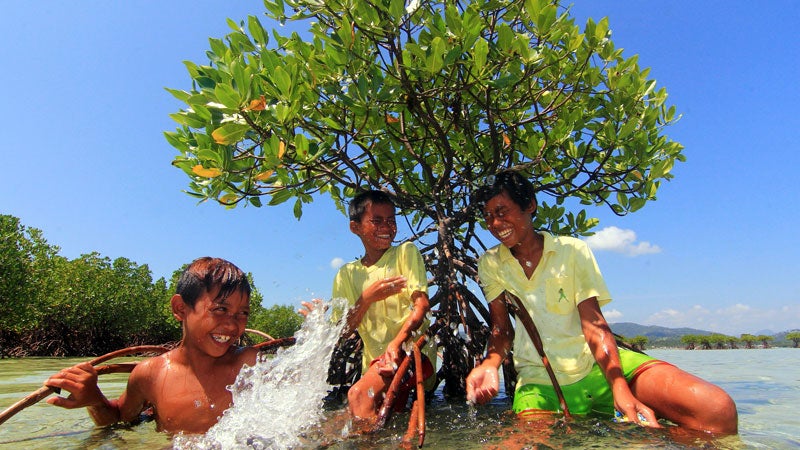 SHADE OF MANGROVE ‘PARASOL’ Boys enjoy the shade of a mangrove species in the coastal waters of Puro-Sinalikway in Barangay Nursery in Masbate City. Mangroves serve as storm protection to coastal communities and as nurseries to many marine species. MARK ALVIC ESPLANA/INQUIRER SOUTHERN LUZON

There’s a way to tame the rowdy rodeo experience that Masbate is known for: Just add crystalline water, hectares of coral reefs and an islet paradise.

A 15-minute boat ride from the city provides a welcome break from Masbate’s cowboy country image of man versus cattle on a dusty rodeo arena, as tourists have discovered at Buntod Reef Marine Sanctuary.

The reef sanctuary is a refreshing surprise of 234.54 hectares of coral reefs on a shallow shoal of crystal-clear waters surrounding a small island of powdery white sand and a mangrove forest.

Buntod was declared a protected area by the Department of Environment and Natural Resources (DENR) in 2001 after an assessment conducted by the office revealed the presence of the helmet shell (Cassinae), locally known as budyong, a threatened species of shellfish seldom seen alive in Philippine waters.

Aside from the helmet shell, live giant clams (Tridacna gigas) are also abundant in Buntod’s reefs, which are teeming with tropical marine life and clusters of soft and hard corals.

The little-known marine haven is under the joint protection and maintenance of the city government and resident fishermen and their families collectively known as Samahan ng Mangingisda ng Puro-Sinalikway (Samapusi) from the two sitios of Barangay Nursery, according to Chandyllane Cantre, an assistant for the city’s ecotourism enterprise development arm. The enterprise is part of Masbate City’s Environment and Natural Resources Office (Cenro) Integrated Coastal Resources Management Project (ICRMP).

Samapusi is a group of fishermen who used to engage in blast fishing, according to ex-Mayor Socrates Tuason.

Tuason helped organize the group into a nongovernment organization in 2008. “They are now guardians of the marine sanctuary,” the former mayor said.

During the peak season, between March and June, some 200 visitors a day come to the Buntod Reef Marine Sanctuary, said Samapusi president Romeo Soria Jr.

The group offers ecotours that start from the Barangay Nursery public port at Rendezvous Hotel and Resort. From the main port, guests are ferried to a wooden cabana attached to Buntod’s miniport on the white-sand islet, just a few strides from a 2-ha mangrove forest maintained by Samapusi.

Juvenile fish, including flying fish, swim in schools around the legs of visitors who venture into the water. Seashells of different varieties can be found on the sandbar, brought in by gentle waves from Mobo Bay and Masbate Pass-Ticao Pass Corridor.

Guests can go snorkeling and scuba diving, or rent boats and kayaks in the 183-ha buffer zone of the coral reef, with at least one member of Samapusi acting as a tour/reef guide. The guides are fishermen trained to protect and maintain the sanctuary.

The 51.54-ha core zone of the marine sanctuary also allows snorkeling, boating and diving, although boats are not allowed to drop anchor to avoid damaging the corals and the marine ecosystem.

As part of the tour package, snorkeling and scuba diving equipment are available for rent from Samapusi.

Floating cottages can also be rented for guests who wish to have their lunch in the middle of the bay while viewing the coral reefs and underwater marine life.

Also a favorite among bird-watchers is Pawa Mangrove Ecosystem and Wildlife Park adjacent to Buntod, which is under the care of Samapusi and the women of Barangays Pawa and Usad.

The area is famous for its 1.3-kilometer wooden bridge that connects Barangay Pawa and Sitio Daang Lungsod in Barangay Usad, the longest bamboo boardwalk in Bicol.

Both the sanctuary and Pawa Mangrove Ecosystem and Wildlife Park were included in the ICRMP by the DENR in August 2008 in an effort to “enhance coastal resources and uplift the socioeconomic conditions of the fisherfolk, farmers and stakeholders,” Cantre explained.

Residents living around the reef sanctuary and the mangrove park have been tasked to protect and rehabilitate the marine ecosystem they used to abuse, as well as conduct mangrove reforestation in Buntod and Pawa.

Cantre said the DENR contributed P380,000 to the ICRMP Ecotourism Enterprise and another P1-million grant for the biodiversity conservation efforts of Samapusi.

The DENR and the city government also provided the residents-turned-ecoprotectors with facilities like patrol boats, binoculars and solar panels to help them in their duty as guardians of the marine sanctuary against illegal fishermen.