For Jon Santos and Red Concepcion, it’s been a twisting but fab road to ‘Priscilla, Queen of the Desert’ | Inquirer Lifestyle ❮ ❯ 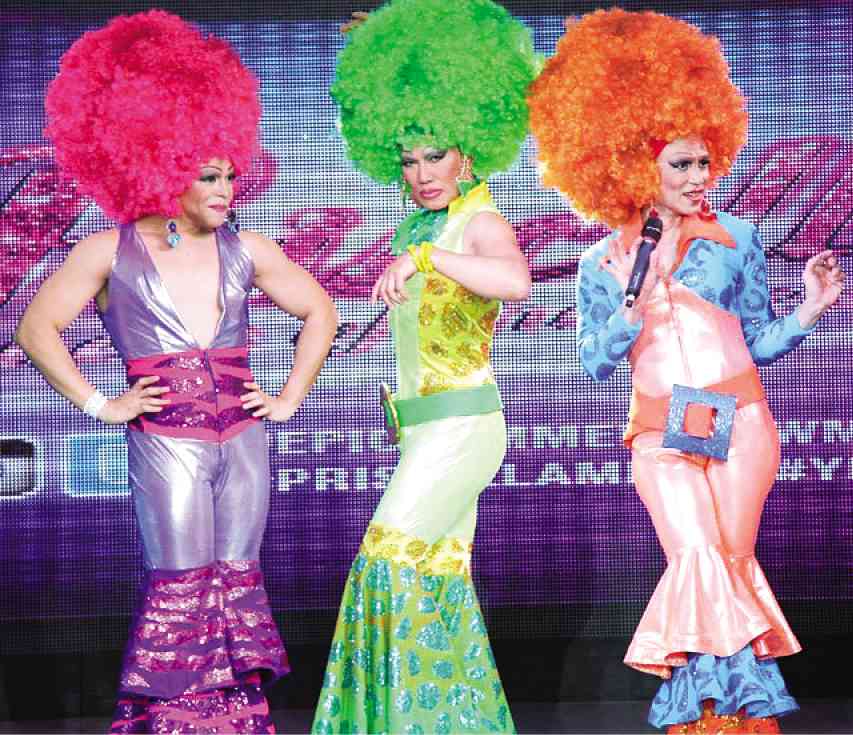 Concepcion (left) and Santos (right) with costar Leo Valdez in “Priscilla,Queen of the Desert”.

For Jon Santos and Red Concepcion, it’s been a twisting but fab road to ‘Priscilla, Queen of the Desert’

One actor came from a theatrical family, while the other had no artistic background. Both are making their professional transitions from theater into commercial television, and vice versa.

But regardless of their different backgrounds, Jon Santos and Red Concepcion find themselves as companions in a theatrical journey that will, aptly enough, explore themes of compassion, tolerance, and respect for people whose sexual, cultural and personal inclinations may be radically different from ours.

The two actors are playing drag queens in Resorts World Manila’s (RWM) production of “Priscilla, Queen of the Desert,” which opens May 9 at RWM’s Newport Performing Arts Theater. The musical, the Manila version of which is directed by Jaime del Mundo, made a splash on West End and then Broadway with its retro songs, spectacular set and extravagant costumes. The material, written by Stephen Elliot, unapologetically celebrates flamboyance.

But there is a beating heart to the piece, insist the two actors, belying the perception that it is merely an expensive drag show.

“Race, color and gender are non-issues,” says Santos. “They are societal constructs that affect our perception of a person. But this play is asking, ‘What does make a good person?’ It asks us to be more accepting of others.”

In  a sense, Santos knows what it’s like to be an odd man out. He is one of the few performers who have come out with his gay marriage. More known as a comedian and TV performer, he is trying his hand again at theater. And while his name on the marquee can bring in the crowd, it also carries a challenge: “From Day 1, it was tough,” he says. “I had to get into the character and resist the urge to impersonate.”

Santos plays Bernadette, an actual transsexual (not just a drag queen) who is looking for a purpose in life.

“The audience has to see the character, not Jon Santos,” he says.

That is also the challenge for Concepcion, who makes a startling shift from playing leading Prince Charming-like roles to Adam, the younger, more arrogant drag queen who wants to make a mark on the stage world.

“There is a lot of singing and dancing,” he says, “plus you have to wear those dresses, the high heels and those extravagant headdresses.”

The affable Concepcion can do both romantic leads and intense, disturbed character types, in plays as dramatically different as “The Little Mermaid” and “Equus.”

In “Priscilla,” he has to turn obnoxious sometimes, as his younger and more in-your-face character tends to rub off the wrong way Bernadette and Tick, the third performer in the triad played by Leo Valdez.

Had luck turned out a different way, Concepcion would have been playing opposite his real-life father who also auditioned for the musical. Concepcion’s parents, Raymond and Gene, used to perform in plays at the Metropolitan Theater prior to settling down in the corporate world.

While they did love the craft, their knowledge of its risks, especially in the financial aspect, made them hesitant at first about giving their blessings to their children Red and Sam, now a popular actor, singer and TV host, to go into show biz.

What ultimately convinced the Concepcions that Red was serious about pursuing a theatrical career was his gaining a scholarship in musical theater at a school in Singapore.

“I was raised watching musicals,” says Concepcion. “My grandmother was a music teacher. Some of my favorite movies starred Gene Kelly and Fred Astaire.”

In contrast, Santos’ parents wanted him to be a doctor. He smiles now at the thought: “I was this close to being a scientist.” He could have availed of a government scholarship that would have led him to study medicine or science, until he found out that his parents would have to foot the bill in his later years.

Santos eventually shifted to economics with a career track either in education, finance or banking. But his performances in campus theater with Behn Cervantes and his fanboy admiration for Tessie Tomas, who was then at her peak as a comedienne in the early 1980s, changed his path.

While on a visit to the University of the Philippines where Santos was studying, Tomas was informed by Santos’ friends about this fan who was impersonating her among the college crowd. Tomas saw one of Santos’ performances on video and wrote him a personal note: “You are an original, not a second-rate copycat,” echoing one of the most famous quotes in Philippine cinema.

“I still have that note with me,” Santos  says fondly. Over time, Tomas would invite Santos to be part of her act, paving the way for his own solo performances in the comedy circuit a few years later.

Concepcion also experienced a brief detour of his own, but his stint in the business sector reinforced his love for the theater.  He trained young professionals in his company on performance-related skills that could help them in their work, such as projection, communications and performance.

“I wanted to influence people as much as I could,” he says. “I loved training people, but it was sitting in front of a computer eight hours a day that drove me crazy.”

In the end, all roads did lead to their first love, and both actors are breaking new personal ground in “Priscilla, Queen of the Desert.” Santos has had to adjust his TV performance behavior to the stage, and Concepcion has learned how to dance in sequins.

“You live with self-doubt every day,” says Santos. “But you do what you have to do, approach your journey with faith—and the planets will align.”