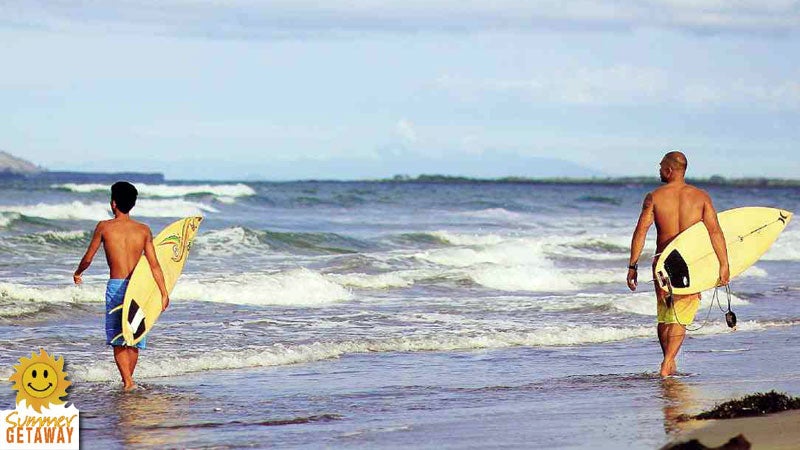 SURF’S UP The call of the waves comes early in the morning for these surfers at Bagasbas Beach in Daet, Camarines Norte province, where there is so much to do and so much to appreciate that most locals who had left for greener pastures always end up returning and staying. MARK ALVIC ESPLANA/INQUIRER SOUTHERN LUZON

DAET, Camarines Norte—From sunup to sundown, there is always something new to expect and something exciting to do on the huge waves and seemingly boundless shore of Bagasbas Beach here in Daet, whether it’s summer or not.

The beach attracts both locals from adjacent towns and foreign visitors who come to enjoy the relaxed vibes of beach life for next to nothing.

The owner of Hangloose Surf Shop says people can enjoy Bagasbas’ sand and surf even with just P50 in their pockets.

Early mornings on Bagasbas Beach find joggers along Cory Aquino Boulevard watching the sun paint the sky with various hues of dawn, while surfers ready their boards for yet another day of riding the waves of the Pacific Ocean as they crash against the shoreline.

Betzayda, 48, speaks fondly of the place she was born and grew up in, and of the varied pleasures it offers.

There are regular weekend fun runs organized for various advocacies, she says, which start at Daet’s town center and end at the boulevard in Bagasbas.

Extreme sports enthusiasts, who come to the beach during surfing season from October to December, engage in kite-surfing after sampling Bagasbas’ huge waves that can swell to more than 3 meters tall.

Betzayda’s daughter Karen, 20, a surfing instructor who started surfing at the age of 10, swears to the irresistible call of Bagasbas.

“I used to work at a call center in Manila but I returned here because I just can’t live with the pollution and noise of city life,” says the younger Betzayda, who trains beginning surfers at P400 an hour with surfboards supplied by her mother’s enterprise.

When she’s not teaching tourists how to cleave to the surfboard despite rampaging waves, Karen takes them on a tour of Camarines Norte province’s tourist spots, including the seven islands of Mercedes town and Calaguas Island in Vinzons town.  The island was considered the top Philippine Gem in 2013.

Like Karen, Ignatius Vinzons, 30, finds himself returning to Bagasbas, which has become part of his growing up memories of Daet.

The relative of Camarines Norte’s former governor and famous son Wenceslao Q. Vinzons, who teaches philosophy at the University of the Philippines Manila, taught himself to surf and chose to do so in Bagasbas.

But the beach has more to offer than just the thrill and excitement of extreme sports, according to pastor Malou Pandi, 53, who has been conducting religious immersions with young members of her flock in Bagasbas since 2010, because the place is safe and near the youngsters’ homes.

“It is a perfect place for bonding with family and friends because it’s for free and is open to everyone,” Pandi says, adding that the atmosphere of Bagasbas is also perfect for those who wish to meditate and reflect.

The shoreline is dotted with open cottages provided by the local government of Daet that are available for rent at P200 each. The money helps the upkeep of a group organized by Daet Mayor Tito Sarion to regularly conduct coastal cleanups in Bagasbas.

The beach is as popular at nighttime, says Jean Dalit, 29, who sells fresh coconut shakes in Bagasbas with her husband, Edilberto, 36, and son Gerald, 9. Foreign tourists are crazy about the shake that sells for P20 to P30 for each mineral water-sized bottle, she says.

Other stalls selling various kinds of street food line the boulevard at night, with powerful streetlights making sure that the beach remains free of troublemakers who might bother guests enjoying the cool night breeze as they sit on the powdery sand.

The rest of the boulevard is lined with bars and lodges, the most popular being the Lighthouse Hotel and Restaurant.

Lori Ann Baricas, 37, owner of White Wave Hotel, Bar and Restaurant, says summer is peak season for those looking forward to a relaxing evening with friends, while enjoying beer and snacks on the beachfront.

Seniors get their own share of fun on Friday and Saturday, which are designated ballroom nights in Bagasbas’ SM Ballroom, Baricas says.

Other guests opt for a stroll on the boulevard, while others build bonfires on the beach.

Life’s definitely a beach in Bagasbas—and soon in surrounding towns, as plans are afoot to extend the Cory Aquino Boulevard to the towns of Mercedes, Talisay and Vinzons.

A standard two-lane highway originating from Bagasbas’ boulevard would connect the four towns, says Camarines Norte Gov. Edgar “Egay” Ta.  The highway is about 9 kilometers long, with the construction set to begin this year.

The new road will definitely boost tourist arrivals, says the governor, adding that tour operators can now take their clients from one tourist spot to another more quickly and comfortably.

Thanks to the access road, local travelers can also easily ferry their goods across towns, says the official.

Benguet: Where climbing peaks is an act of worship