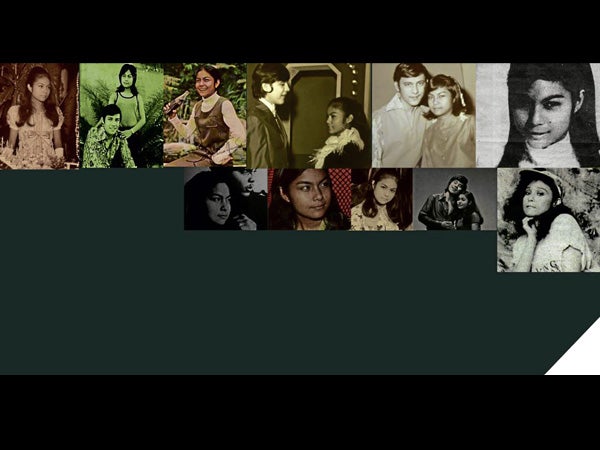 The “superstar… has something behind the eyes that you couldn’t see until you photographed it in close up. You could see thought. If she had to look at one person with jealousy, and another with love, she didn’t have to change her expression. You could see it in her eyes as she looked from one to the other. And nobody else has been able to do that on screen.”

The quote is from Kevin Brownlow, a respected authority on Hollywood film history, writing about the legendary actress Greta Garbo, who reigned from the silent era to the ’40s.

He might as well be talking about Filipino superstar Nora Aunor.

There may be nothing extraordinary about the shape or color of Nora’s eyes, but one can readily see that they are her prized attributes as actress. For those eyes reveal her depth and intelligence in portraying a character.  Without changing facial expression, she can convey joy and misery, triumph and frustration, concern and contempt, amore and anger—just by looking at the camera, her co-actors, or even into blank space.

If the face is mirror to the soul, Nora’s eyes could be the magnifying glass, revealing in detail what’s on her mind at the moment.

There is no overrating the power of these eyes, but long before critics took note of them, Nora already had people under the spell of her voice.

Here was a rarity: a hugely popular singer who looked plain, and a movie musical star who didn’t dance as well as Cyd Charisse and Nida Blanca, evolving into a great singer and a great actress. Singing actors are common in local showbiz, but Nora is peerless.

As singer, she stood with the best with a voice that was full and expressive, and conveyed in both English and Tagalog songs a range of emotions. In her prime as vocalist, she could hit high notes and low notes, and negotiate a song’s phrases and dynamics with ease and clarity.

Sadly, this is all in the past tense.

Two years ago, complications from a cosmetic surgery treatment in Japan led to an emergency tracheotomy that destroyed her voice box. Because of this, Nora makes it clear that she can no longer sing. Recently, she told media at the press conference that a solution to this problem is a medical procedure that would cost $50,000 at the same American hospital in Boston that restored Julie Andrews’ voice.

Now fans can only recall those halcyon days when Nora could tug at the heartstrings with a sentimental song, while winning over more discriminating listeners with such standards as “Windmills of Your Mind,”  “People,” “The Greatest Performance of My Life” and “Moonlight Becomes You,” the song that made her the “Tawag ng Tanghalan” grand champion and earned her a quick ride to fame.

US-based Jojo Devera, a long-time Nora fan, confidant and chronicler, and an archivist of local movies and entertainment, narrates the odyssey of this petite Bicolana who sold water to train passengers then joined singing contests on radio and television.

Says Devera: “The parents of 12-year-old Nora Cabaltera Villamayor of Iriga, Camarines Sur, needed P20 for an older sister’s tuition. Nora, who loved to sing and listen to pop music, volunteered to join ‘Darigold Jamboree,’ a popular radio program that was bringing its amateur singing contest to the nearby town of Naga. The prize money was P20. Packing a second-hand dress that her mother, Antonia, had altered for her, Nora left with a family friend for the two-hour trip to Naga.

“In Naga, she won the ‘Darigold Jamboree’ contest with her rendition of ‘You and the Night and the Music.’ It was again in Naga where she won another contest sponsored by the rival radio program, ‘The Liberty Big Show.’  Her dual victory gave her the courage to audition for a national amateur singing contest on TV.”

In her gamin days, Nora was like Charice Pempengco, another probinsyana with a powerful voice who caught the fancy of Oprah Winfrey and became big.  Decades ago, Nora wowed everyone with her great voice and reportedly won the heart of a visiting singer Timi Yuro (“Hurt,” “I Apologize”) who was then said to have wanted to adopt the Bicolana waif. But Timi, who died a few years ago, was not as big and influential in America as Oprah is now. Still, the similarities between Nora and Charice are striking.

“Nora and her mother set out for Manila,” Devera continues. “They stayed with Antonia’s sister, Belen Aunor, who volunteered to take Nora to the studios for the auditions. They agreed that Belen would pose as Nora’s mother or guardian. Nora borrowed her aunt’s surname. Thus was born Nora Aunor.

“On ‘Darigold Jamboree’s Bulilit’ contest on Channel 11, Nora Aunor reigned as undefeated champion for 14 weeks. Then she set out to conquer ‘Tawag ng Tanghalan,’ at the time the most prestigious amateur singing contest. She won the night’s competition, but in the ensuing bout with the reigning champion, Jose Yap, Nora’s anxiety surfaced. She stuttered and missed a line and tasted defeat.”

The broadcast exposure must have helped her recordings shoot up the charts. Her cover of “Pearly Shells” sold   over a million copies in a year.

Now a superstar, she became TV’s newest singing sensation and starred  in the “Nora-Eddie Show” with Eddie Peregrina in 1967, then “The Nora Aunor Show” in 1968, and the weekly “Superstar” from 1971 to 1989, with German Moreno aka Kuya Germs.

Ironically, Nora says she was an early Vilmanian, a fan of arch showbiz rival Vilma Santos.  Sampaguita was the breeding ground of the future Star for All Seasons, whose movies as child star, “Trudis Liit” and “Ging,” Nora claims to have seen several times.

Devera notes that Nora had previously been turned down by four other movie outfits, but Sampaguita offered her an eight-picture deal on Oct. 2, 1967, with the assurance that she’d be given singing parts.

“True enough,” he happily reports, “in ‘All Over World’ and ‘Way Out of the Country,’ her first two movie appearances in 1967, she sang with her former ‘Tawag’ opponent, Jose Yap. In her 12th movie two years later, ‘Young Girl,’ she was cast opposite the young mestizo actor Tirso Cruz III. But it was Tower productions that trusted Nora Aunor with a title role in ‘D’ Musical Teenage Idols’ (1969) opposite Tirso Cruz III.” The team became known as Guy & Pip, their respective nicknames, and was cast in the 1971 Manila filmfest movie of the same title.

Artemio Marquez, director of “D’Musical Teenage Idols,” was warned by industry experts against casting a plain-looking and dark-skinned waif that went against   the box-office grain. But Marquez ignored the advice—and reaped a blockbuster.

The fans were insatiable, lapping up Nora’s records, forming fiercely loyal fans clubs, trooping to see her movies.   Guy and Pip had one or two movies every month, with only Vilma Santos and Edgar Mortiz as their closest rival.

Nora’s appeal swung from common to classy.  The dusky singer was not in the mold of Gloria Romero, Nida Blanca or Amalia Fuentes. She altered fan preferences and showed that brown is also beautiful.

In her movies, Nora had teamed up with leading men prettier than her: Manny de Leon, Sajid Kahn, Walter Navarro, Ricky Davao, Lloyd Samartino, Victor Wood, Cocoy Laurel. Another co-star, in 1971’s “Lollipops & Roses” was then-unknown Hollywood actor Don Johnson, who would later become big on TV’s “Miami Vice.”  In Nora’s later period during which she made serious films, she was paired with the likes of Dindo Fernando, Jay Ilagan, Ronaldo Valdez, Bembol Roco, Yul Servo, Dolphy, Joseph Estrada, and Fernando Poe Jr., among many others.

Nora Aunor reaped innumerable acting honors, having evolved from a mere passive singing star to a dynamic dramatic performer. She won her first award, albeit a minor one, in 1972 for her 53rd movie “And God Smiled at Me.” After her first major award, a Gawad Urian for best actress from the Manunuri ng Pelikulang Pilipino, other awards-giving bodies followed suit (Famas, Star, Film Academy of the Philippines,   Metro Manila Filmfest).

She has eight Urian trophies, two for Dekada awards (as best actress of the decade), shared with Vilma Santos who has 10 Urian awards.

Before she left for the US in 2004, she won the Manila Film Festival best actress award for Maryo J. delos Reyes’ “Naglalayag.”

Two highlights of Nora’s movie career were “Banaue” (1974), her only movie with Gerry de Leon (and his last) and Mario O’Hara’s “Tatlong Taong Walang Diyos” (1976). In both, she was paired with Christopher de Leon whom she married in 1975.

They have a son, Kristoffer Ian, and several others whom she adopted: Lotlot, Matet, Kenneth and Kiko.

NORA Aunor’s rags-to-riches story was interrupted only by her seven-year stay in the United States, where she wanted originally to just have a change of pace, do concerts to pay the rent, and take it easy. She says she experienced penury, loneliness, homelessness, and dependence on the kindness of compatriots and fans there, as she moved from one house to another, from one state to another.

She was arrested for shabu possession, reported to have a same-sex marriage with a former manager in Vegas in 2000, and drunken shenanigans and   casino marathons with long-time companion John Rendez (which she has denied).

It’s a life story stranger, more lugubrious and protracted than TV soap opera—and worthy of a novel. For now, she is back in her element as an adulated, wooed and cajoled superstar, back with a new home and studio, TV5, which is producing a mini-series tailor-made for the returning prodigal, “Sa Ngalan ng Ina.” She is also committed to do two movies this year.

Before she left, she was notorious for being the quintessential prima donna—difficult, unreasonable, demanding, insensitive to the needs of  co-stars, the only difference being that she could also be sweet, humble, and self-effacing whenever she wanted to. Now, almost pleading, she tells media friends that the old wayward Nora Aunor is turning over a new leaf.

To rabid Noranians, she remains the only superstar although the actress herself has tried to discourage them from calling her that. Only one persona has the right to be called such, she says, the divine Jesus Christ. But who can stop them? Her followers venerate her like a deity: infallible, pure, both superstar and Superstar.

So again, here comes Noramania, a phenomenon that once swept the country – a success story – of rise and fall and resurrection.

Veteran columnist Ronald K. Constantino, a long-time Noranian, assesses Nora’s contribution to local showbiz with sobriety, clear thinking, and affection: “Her greatest achievement is giving joy to and inspiring the masses with her incomparable singing and acting.”

Yes, that voice. Those eyes.  Such charisma.