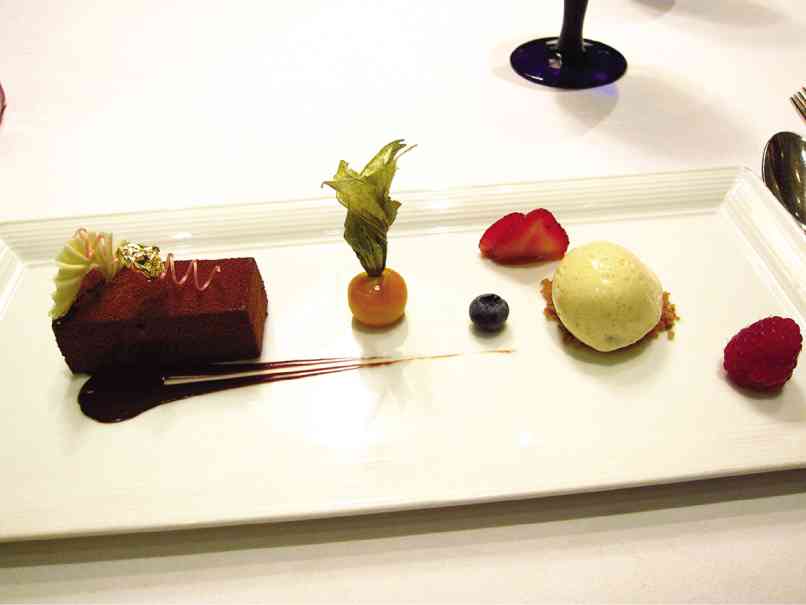 All seats were taken in this extremely limited, one-night-only return engagement of chef Norbert Gandler at Mandarin Oriental Manila’s Tivoli restaurant, where he was executive sous chef from 1989 to 1992, and from 1995 to 2003.

It was the idea of the current executive chef, Rene Ottlik, to have Gandler cook one last time, a fitting farewell to The Tivoli, which closes its doors after lunch on July 25. (The Mandarin Oriental Manila itself will close Sept. 9 after 38 years.)

The list of nine courses was a gustatory trip through The Tivoli’s menu of the best offered through the years. Many of the guests remembered some if not all of the dishes that made it an experience to dine there. And that evening of July 11 was no different.

From the Amuse Bouche of seafood espuma (foam) to the Carrots and Cheese course, the dishes’ arrivals were followed by clicks of mobile-phone cameras as well as traditional big lenses. Eating was on hold as the best angles of the dishes were determined. It was, after all, a night to remember and to Instagram friends who weren’t as lucky to be there.

If there’s one dish that reminds people of Tivoli, it is the Millionaire’s Salad—folded smoked duck breast accompanied with pressed mud crab salad, salmon roe and mesclun greens dressed with walnut sherry vinaigrette.

It was the foie gras ice cream that lifted this appetizer to the richness bracket, though the cost didn’t make this dish and the dishes to follow quite exceptional. It’s how flavors melded and

how different textures played on the palate, adding dimension and surprises. After the last lick of the ice cream, we started missing it terribly.

Salmon tartare was on crisp “pan de tomate” which was like a bridge that connected to the seafood medley island amid a sea of bouillabaisse froth. There was the crunch of the cracker, the fresh flavors of fish and the rich broth. At our table we told each other, but only through smiling eyes, how delighted we were to taste this dish one last time.

But while the meat was the main event, the supporting cast almost upstaged it. The green pea risotto and wild mushrooms were so delightful we wished there were more of it.

We made the same wish with the gremolata (chopped garlic, parsley and lemon zest) which tempered the richness of the veal cheeks.

It was back to the sea again with the Mediterranean mix of seared scallops, tortellini of portobello mushroom and spinach with a sauce vierge (chopped tomato and basil with olive oil and lemon juice). This was the dish which made some of us choose chardonnay over the pinot noir even with the veal cheeks that came ahead. It was a Kendall-Jackson Vintners Reserve, Chardonnay, 2009, Sonoma County, California, USA.

To prepare for the final meat dishes was a blackberry sorbet surrounded by shaved Grey Goose vodka ice and tonic water.

The break was a time as well to go around Tivoli, greet friends and colleagues, the atmosphere of reunion induced by Gandler’s homecoming together with Tivoli’s former executive pastry chef Ernie Babaran and sous chef Kenneth Cacho. Both teach at International School for Culinary Arts and Hotel Management (ISCAHM) co-founded by Gandler. Young Joey Reyes volunteered to help that evening to have the chance to cook with his mentor.

Gandler is credited with training some of the best chefs in Manila, such as Humphrey Navarro, Tonyboy Escalante of Antonio’s and Ariel Manuel, formerly of Lolo Dad’s. The three, together with Cacho, cooked one of the most memorable Tivoli dinners, a tribute and farewell to Gandler in 2003.

For many years, Gandler has garnered several gold medals and overall championships for Mandarin Oriental Manila at the culinary competition called Chefs on Parade. According to one guest, the “hall of fame” award had to be invented to take Gandler’s troops out of the running.

Gandler has also been juror in culinary competitions such as the annual Kumbira in Cagayan de Oro, and Baguio Hotel, Restaurant and Tourism Weekend.

Back to our seats again, the next two dishes indicated the provenance of the ingredients which made research necessary, after the eating, that is.

The Australian Bultarra Saltbush lamb is organic and free-range and grazes on bushland, according to its website. It was cooked sous vide at 52°C (long slow cooking in vacuum-sealed plastic in a water bath), but didn’t come out as tender as expected. Despite the modern cooking method, it was served in the traditional manner of having it crusted with Kalamata olives and served with green apples, celery and mint chutney.

Main courses ended with what diners call “surf and turf,” a combination of butter-poached baby lobster and roasted Nebraska prime Angus beef strip loin. This time the beef was tender, the lobster cooked simply because that was all it needed. We finished everything on the plate as if we hadn’t gone through seven courses.

The fitting drink even for an Australian lamb and a Nebraskan beef was French Clos Plince Gran Vin de Bordeaux, 2008, from Pomerol.

It was chef Babaran’s turn to weave his sweet fantasy—a perfect Valrhona chocolate in layers, every bite so light, and buttered popcorn ice cream on a bed of praline. Did we want port with that? Of course we welcomed a Portuguese Dom Duarte Maédre.

It was an unusual cheese course that ended the farewell dinner. A strip of Pont-l’Évêque, which is cow’s milk cheese from Normandy, was served with carrot sorbet with yoghurt ice cream with beetroot purée.

And just to emphasize the Normandy connection, Calvados Coquerel from Basse was served to toast as well the memorable evening.

The return of Gandler served as opening salvo for Memories: Best of the Best of The Tivoli, which will have Ottlik and current executive sous chef Remi Vercelli cook the favorites that include French Onion Soup and Crab Diablo.

Tomorrow Margarita Fores will be cooking at The Tivoli as her final tribute to the grand dining restaurant. (For reservations, call 7508888.)

As Gandler, Babaran and Cacho went around after the dinner, they were applauded for letting guests taste again the kind of cooking that would be missed. And like the three chefs, those who are still there carrying on until the doors are finally closed will also move on to other kitchens, bringing with them the skills honed by a master teacher like Norbert Gandler and other executive chefs who have cooked at The Tivoli.