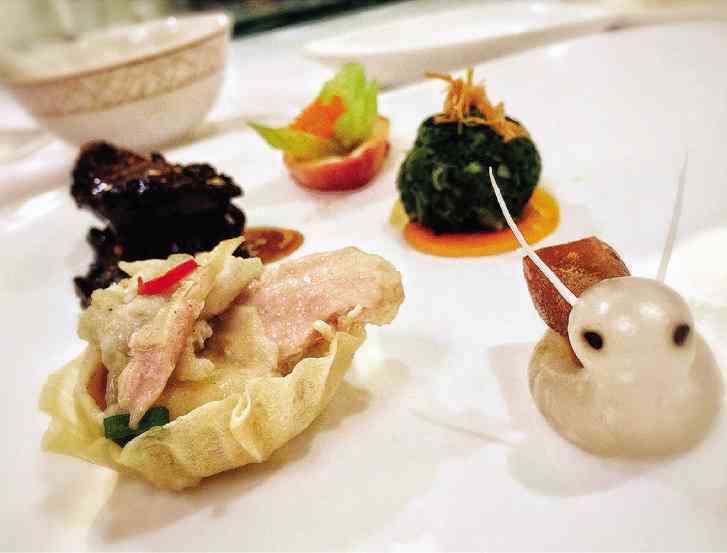 Yang chow fried rice is supposed to be an example of Huaiyang cooking, the cuisine of a region in China. But the food we were served that noon at Shang Palace of Makati Shangri-La Manila was not typical. The appetizers were already surprising.

Bite-size pieces were arranged on a plate with a snail facsimile staring at us. It’s supposed to tell us the ingredient it carried on its back—stewed snail with garlic in chili sauce, but formed as small rectangular brown pieces.

On a pastry cup were marinated chicken with sliced abalone spiked with wasabi. A greenish ball turned out to be minced spinach with green mustard. Marinated celery looked like green petals of a flower. The blackened sliced pieces were glazed fried fish in five-spice powder.

By then we knew that chef Anthony Dong, guest chef from the Shangri-La property in Futian, Guandong province, was going to show off much more than our idea of Chinese cooking—the sweet-sour pork, hot-and-sour soup kind.

When the soup arrived, however, we thought it was plain misua, thin wheat noodles. No, we were told, it’s tofu sliced so thinly as only one with a great knife skill can deliver. That made

us appreciate the “superior” broth even more, the adjective always used in English translations of Chinese menus to indicate soup made from excellent stock.

Yet the most bewildering entry from a Chinese chef was the stewed pear with shredded beef cheeks at its core. Because the dish was so French, we asked chef Dong if he was influenced by French cooking, considering the way he fashioned his appetizers and then later even the way he served his assorted fruits—shaped into balls, so unlike what one gets in Chinese restaurants.

He said, no, this was the way he cooked and served. Maybe something was lost in the translation, but reading up on him later revealed that chef Dong won a gold medal at a National Innovative Cooking Competition in China. And yet the other courses were more traditional—asparagus in bamboo pith with wolfberries, shrimp in oatmeal and fried rice.

Huaiyang hosts one of the four major cuisines of China, the other three being Shandong, Sichuan and Cantonese. At the Chinese Cuisine Training Institute in Hong Kong, there are four kitchens, each equipped according to the requirements of those cuisines. I suppose it would have the facilities to cook the main protein source of Huaiyang cooking, which is freshwater food from the two rivers that flow through the region, Huai and Yangtze. 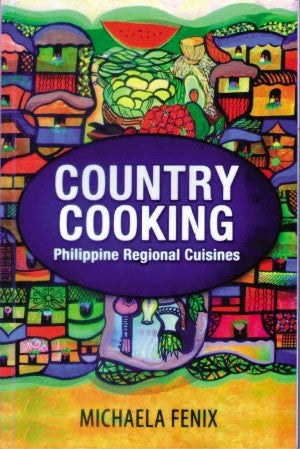 “Country Cooking,” the title of this column, is also the title of my book on Philippine Regional Cuisines (Anvil Publishing, 2014). It’s 20 years of work packed into just over 200 pages that started when I was commissioned to write about Filipino cooking for a book entitled “Philippine Cuisine: Our Country’s Heritage” (Monterey Farms Corp., 1995).

The project brought me north to south of the country, but mainly on the western side. It was supposed to be a three-volume package to cover the whole of the Philippines, but it stopped at that one volume. Yet the adventure had to keep on going, as I found our cooking so varied and so intriguing. And I was encouraged by those who wrote about the cuisine before I did—Gilda Cordero Fernando, Doreen Gamboa Fernandez and Ed Alegre.

During that early research, people often wondered why I was so interested in what they cooked and ate. They considered what they had every day too ordinary to be worthy of mention even in an article or a book. Some even didn’t want me, a city girl, to try what they thought I wasn’t used to, like the goto of Batangas (boiled head of cow) and the sinanglaw of Ilocos (boiled innards).

I have been as far north as Batanes and as far south as Tawi-Tawi, the last one a trip that was considered reckless and too adventurous.

Today, those trips and those discoveries are considered ordinary. People seek out our cooking, and delight in their findings transmitted in a second through their phones. But then again a one-line description, or letting the picture do the talking, cannot be enough. The research has to be digested like the food, its ingredients discerned to determine what makes it what it is.

Equally as important is to cite the cooks, those who continue the tradition, who do this daily but do it well and who can answer all the “Whys” you ask.

Some of the essays were written in this column; others from books I did and articles I wrote in magazines and newspapers. The most difficult job in doing this book was to rewrite and

The artist Manuel Baldemor provided the artworks for the cover and the chapter openings and endings. My friends gave me their recipes to serve as endings to each chapter—some of which were cooked during the launch in June. Many guests, however, couldn’t make it because of the thunderstorm that tied up all the streets leading to SM Aura at the Fort.

My research sources, my friends in food, are too numerous to mention here and thank, but they know who they are. This is their book as well.