Let’s Hear it for this Deaf Chef in Malacañang | Lifestyle.INQ ❮ ❯ 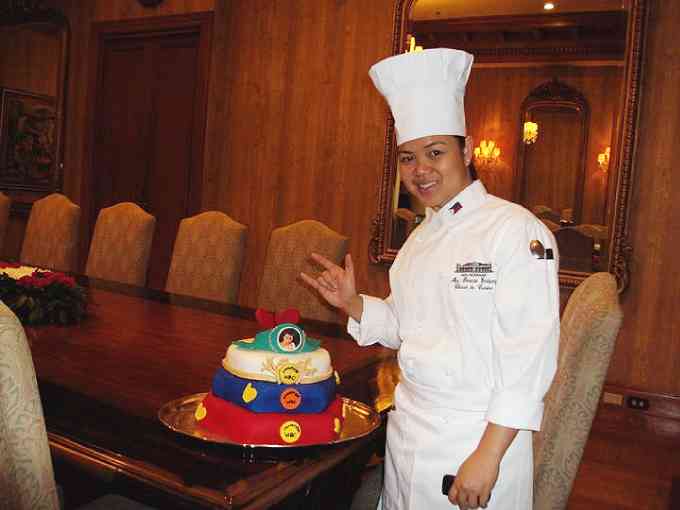 Let’s Hear it for this Deaf Chef in Malacañang

MA. Rosario “Sunshine” Enriquez was about a month old when her mother Corazon discovered that she was deaf. Despite her mother’s startled scream when a drinking glass accidentally fell, Sunshine had remained fast asleep. She is the second in a brood of five, four of them hearing-impaired. 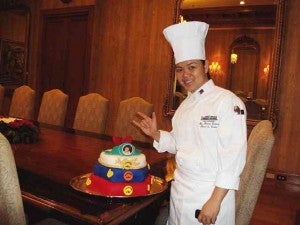 Today, Sunshine cooks for presidents and international guests as a staff chef in Malacañang. Although she has yet to be introduced to President Noynoy [Benigno] Aquino [III], she cites as a high point in her career being singled out by former President Gloria Macapagal-Arroyo, who raved over her Salmon Fillet with Wine and Hazelnut and Cream Sauce.

Another memorable experience was helping out during the “Ondoy” crisis in late 2009. Barely a month on the job and still under probation, she spent the next two weeks as part of the team that cooked endless breakfasts and lunches for the 2,000 typhoon victims sheltered within Malacañang’s grounds.

Sunshine was only 12 when she realized that cooking was something she did well. Her father Felipe had asked her to prepare a Mongolian dish at home and she did, igniting a passion that burns still. 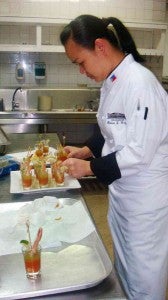 The Food Service Supervisor 3 in Malacañang took her culinary studies at the Center for Culinary Arts and got her job through her former CCA mentor, Chef Babes. But she considers as her best preparation for the job the years she spent at the Miriam College-SAID (for Southeast Asian Institute for the Deaf) where she enrolled after her family relocated from Pampanga to Manila.

SAID started as a non-profit educational foundation in 1974 and was officially integrated into the Miriam College system in 2007.

At SAID, all teachers talk and sign at the same time when they teach the students. This is good, Sunshine says, because some students can hear a little while others cannot. The school follows the Total Communication approach in teaching. After SAID, deaf students can go to college at Miriam, which offers a mainstreamed program for the deaf.

Her classes at SAID helped her become more independent, says Sunshine, who adds that the subject Technology and Home Economics gave her a chance to practice her cooking skills. To date, Sunshine’s specialties include Vietnamese spring rolls, the salmon fillet that President Arroyo liked, as well as several pasta variations.

Sunshine, who dreams of opening her own restaurant “maybe in 10 years,” works with 12 other kitchen staff at Malacañang, three of them differently-abled. Being such has never been a problem, she says, adding that while communication can be difficult at the start, the white board can be a solution. Thanks to her efforts, her colleagues eventually learned how to sign, specifically the alphabet.

She is living her dream, says Sunshine, who has decided to reach out even further and include her own cooking show in her grab bag of wishes.

Sunshine and other just as accomplished graduates of SAID continue to inspire Miriam College alumnae, among them sisters Carol and Marie Ui, Business Administration graduates from Batch ’86, whose volunteering stint at SAID led them away from the entrepreneurial path that people had expected them to tread. Today, as top administrators of MC-SAID, they’re the foremost advocates for the deaf.

As silver jubilarians of the Maryknoll/ Miriam College 2011 Homecoming, the Ui sisters and other members of Batch ’86 are staging a party to raise funds for the scholarship program for the deaf students of MC-SAID.

“There is a need to help the doubly marginalized students,” explains Olen Jalandoni, who chairs the fund-raising committee. “These are the disabled and underprivileged students who cannot afford to go to school and be integrated into mainstream society.” •