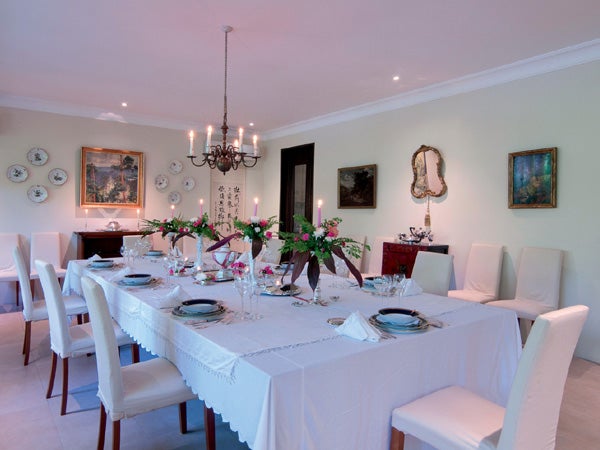 The French political and military leader ate on this tablecloth in the 18th century when he conquered the Papal States of Italy. Photo by Bobot Meru

The baroness’ art of good entertaining

IN 1797,  Napoleon Bonaparte, after crossing the Papal States in his Italian campaign, reached Ancona, a port and trading city in northeastern Italy.  Seeing the troops, the marquis of the Palazzo Trionfi  ran to his fortress called the Rocca Priora on the city border. He then opened fire with two outdated cannons.

Napoleon looked up and said, “Who is that idiot firing at us?”

When the local spy identified the leader as Marchese Bonizio Trionfi, Bonaparte decided that he would live in his palazzo. After all, Palazzo Trionfi was the biggest residence in town, with seven floors facing the sea and four floors facing the back. According to the guest registry, Bonaparte stayed in the palazzo from the 10th to the 13th of February, 1797.

He plundered the silverware and furniture. Today the silver is displayed at Mal-meson, the palace decorated for Empress Josephine. Meanwhile, the long damassine tablecloth on which Napoleon’s food was set had been divided into four pieces—now distributed among the present-generation Trionfis.

Today, a portion of that historic table linen is kept by Baroness Eleonora de Strobel di Fratta e Compocigno Hannikainen who enjoys retelling this piece of history.  Loretta to friends, she is of Austrian and Italian nobility (a lineage of Italian marquises on the mother’s side and Austrian barons on her father’s side).

Here in the Philippines, she is known as the wife of Finland ambassador Heikki Hannikainen.

On being a diplomat’s spouse, she says, “I haven’t known anything else. It’s my way of life. All I changed was the flag on the car from Italian to Finnish.”

As she was raising her firstborn, Christian, Madame Loretta learned to cook Finnish food from the nanny of Christian.  Her references are as old as the Suuri Kiettokirjo (Big Cookbook) published in 1927.

Entertaining and cooking are vital to how  Madame Loretta displays her cultural distinction.

“Hotels are very convenient but my parents like doing things at home because it has a personal touch,” says Leif-Erik Hannikainen, her youngest son.

Madame Loretta is a very hands-on hostess, whether it’s an intimate lunch for five or the celebration of the Finnish National Day for 500.

“I cook myself. It’s healthier. You know what’s going on,” she says.

For dinners in the embassy residence, she combines cultures—Italian, Austrian, and Scandinavian.

A meal will usually have a cold fish entrée. She is careful not to duplicate her Italian dishes with those of Silvana Fornari, wife of the Italian ambassador.  (Madame Loretta clarifies that coming from northern Italy, she favors rice and potato dishes while Madame Silvana comes from the south where pastas and pizzas prevail.)

A salmon dish is a mainstay because it is typically Scandinavian, as with berries, which are abundant in that region.

She enjoys making Austrian desserts such as  sweet rice soufflé,  dumplings and tortes, and heirloom recipes such as an Italian parfait  with sugar, eggs, and whipped cream topped with mango, strawberry, chocolate or marron glacé or chocolate charlotte cake, which dates back to the 18th century.

A typical menu starts with vichyssoise which is followed by chilled salmon mousse  made of flaked salmon, cream, and gelatin. This is followed by the coulibiac.

“It’s a popular Finnish dish adopted from the French and Russians. Very 19th century.  It’s made of rice, mushroom salmon, and lots of butter and eggs, folded into pastry and shaped like a fish. It’s a fish version of a beef Wellington; instead of beef and jelly, it’s the fish and rice,” explains Erik.

A sorbet between the fish and the meat refreshes the palate. The climax is a roulade fillet.

The dessert, typically Finnish—strawberries floating in champagne jelly—evokes the Iceland regions and the abundance of berries in its forests.

In the European tradition of nobility, decorating the table with silver is the norm.

The centerpiece is an English-style floral arrangement called candle cups, with the flowers stuck on candlesticks to lend the illusion of height to the dining table décor.  In floral décor, she  always maintains a single color theme, either pink or blue.

The whole world is represented in the table setting—stemware from Finland, Meisen plates from Germany, Tsarist Russian silverware suggestive of its influence in Austria, Austrian ice cream spoons and sometimes, antique napkins from the Palazzo Trionfi.

Madame Loretta also includes local crafts such as woodwork or capiz that blends with her silver.

Some of her porcelain date back to the 18th century, similar to the plates Napoleon ate on.

As early as August, Madame Loretta girds for Finland’s National Day which is on December 6. After sourcing ingredients from Finland, she collaborates with an old trusted cook who had worked for the Finnish embassy. They start with savory tartlets, which are difficult to bake, and Scandinavian meatballs.

As the day comes closer, they make Finnish Christmas ham, thinly coated with bread crumbs, which takes 13  hours to prepare.

Also in the menu are  herring, salmon,  marinated gravlax, gingerbreads, savory pies and reindeer (which tastes like a smoked version of venison), served with bread and a spread horseradish and cream cheese.

On National Day, Finland’s colors of blue and white prevail—from the tablecloth, candles to the flowers.  The Finnish blue-and-white candles are displayed  on the windows in memory of the people who fought and died for the nation’s independence from Tsarist Russia.

Like his parents, Erik enjoys entertaining. “I follow their way of doing things. They’ve been tried and tested—nice mix of people, cocktails at 7:30, dinner at 8 pm.”

“In northern Italy, the food is very rich with a lot of meat. In my (maternal) grandmother’s day until World War II, it was unthinkable not to have three meats in a meal—boiled, braised, and roasted,” he says.

“I like to make roast duck or  roast beef which is useful in this country because of the heat. You make  roast beef the day before, serve it cold, or I like braised meat in white wine, orange lemon sauce, chicken breast stuffed with blue cheese, Parmesan, and wrapped in prosciutto. Nothing too elaborate.”

One of his favorite dishes is  duck breast, roasted until golden brown, with pink meat, and served with two sauces for aesthetic reasons—there are two very pretty sauce bowls that match.  “I like having them going around the table at the same time. The pink peppercorn is sweet,  and the green is spicy. They come out vibrant. Food has to be pleasing to the eyes,” says Erik.

“As a European I need my potatoes, just as in Asia you need rice. I like dauphinois potatoes, terribly fattening,” he says, referring to thinly sliced blanched potatoes between layers of cream and Gruyere cheese.”

He tries not to serve too many creamy dishes since they might clash with the booze.

He took after his mother’s efficiency. “I make sure everything is done by morning, so there’s no panic.”

At the end of the day, Madame Loretta says the secret to good cooking is attitude. “Always put your love into your cooking.  It will come through with the food.  Give a lot of care because your guests will share that love.”