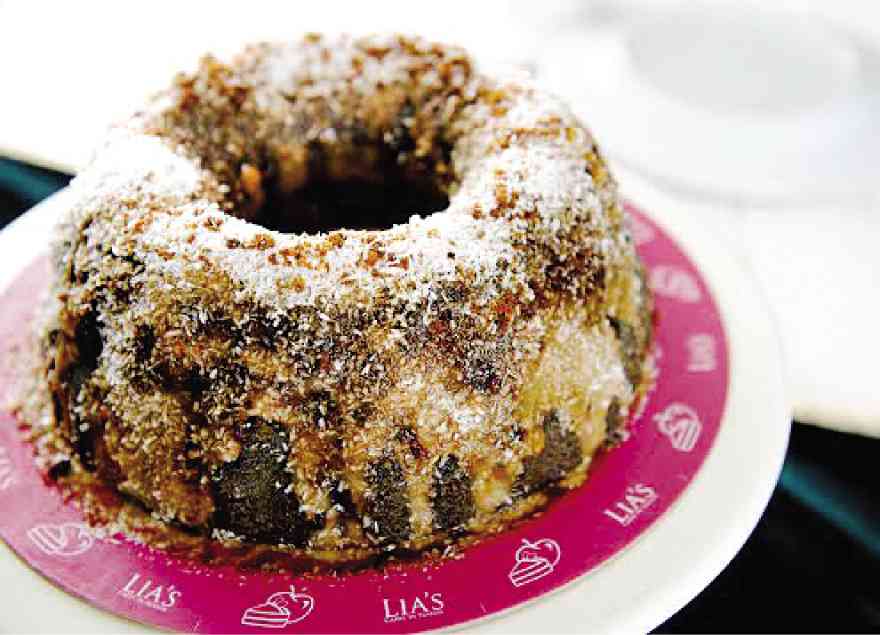 Here is a list of my interesting holiday discoveries.

To celebrate the New Year there is a triangulo that is safe and does not explode.

The Valencia triangulo is a delicacy from Malabon. What it is, actually, is a turon. According to its maker, Aling Tessie Punzalan, in Malabon, turon stuffed with bananas is called “Valencia.” The ones stuffed with sweetened mashed monggo are known to them as turon, while the ones that she makes are called Valencia triangulo—stuffed with bananas, langka and pinipig, wrapped to form a triangle and deep-fried. It is also jokingly called “5 star” by her loyal customers.

Thanks to Mayor Lenlen Oreta, Cleah Nava and Sarah Pascual for helping me find Aling Tessie. 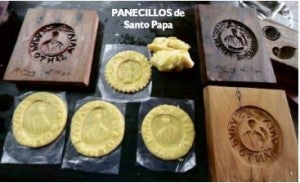 I have always considered Atching Lillian Borromeo a national treasure who has taken on the task of preparing, preserving and keeping the art of old Kapampangan cuisine alive.

Among her specialties is the famous Panecillos de San Nicolas.

Aching Lillian said that “it was in the 16th century, during the Spanish colonial period, that the Augustinian friars introduced the cookies to the Kapampangan who fashioned wooden molds bearing the image of their beloved saint.”

In 1622, the Holy See gave official concession for the blessing of the panecillos under the intercession of San Nicolas de Tolentino.

With the same recipe, Borromeo has also made panecillos bearing the images of other saints. This time, upon the prodding of Abner Mercado, she came up with Panecillos de Santo Papa, to welcome Pope Francis.

With a wooden spoon, mix until the mixture becomes a dough.

Divide the dough into balls of equal sizes and roll the dough on to the mold.

With a pastry cutter, trim off the edges of the dough to shape the cookie.

Bake for 10-15 minutes or until golden brown.

Wildflour is a café and bakery that serves high-quality comfort food inspired by the travels of the owners Anna Lorenzana de Ocampo and Margie Lorenzana Manzke.

The sisters managed to create a menu that is soulful and hip. Their food is neither too simple nor too fancy. Familiar yet pleasantly foreign. It is their added touch of personal flair that makes dining at Wildflour a pleasurable experience.

Of their holiday offerings, I love their Cheesecake Flan, smooth and creamy cheesecake capped with caramel flan, and their pork belly ham served with parker rolls and a sweet, zingy pineapple glaze. It is perfect for breakfast. It is also great to have any time of the day. Wildflour’s branches at Salcedo Village (tel. 8087072), Bonifacio Global City (8567600), or Podium (5718588).

Yes, there is such a thing and it tastes just like puto bumbong!

The cake was originally the entry of the late Lia Carlos to a baking contest.

Lia’s son, Carlo, carried on his mother’s love of baking and made her recipes timeless through Lia’s Cakes in Season, a cake shop located in Barangay Kapitolyo, Pasig.

My favorite is the avocado cheesecake. It tastes like a million calories but is so, so divine. It is light, sinful, creamy and so much like the fruit. The ube cheesecake is also delightful; it is halaya (ube jam) in cheesecake form. Lia’s, tel. nos. 6331937, 0917-6605427.

I have declared my love for Manille Liqueur de Kalamansi as a drink and as an ingredient in my dishes, especially fish.

Little did I know that Destileria Limtuaco would come up with yet another exceptional and proudly Philippine-made liqueur, Manille Dalandan, made with the finest dalandan rinds from Quezon.

It is like drinking pure dalandan juice with a kick. It makes an easy, refreshing drink over ice mixed with or without tonic water and a slice of dalandan.

Another way I have used it was as a sauce for baked salmon and prawns.

pinch of salt and pepper

Put ½ cup of Manille Dalandan in a saucepan.

Reduce over low heat until there is just ¼ cup of liqueur left.

Add cold butter, 1 cube at a time, whisking until the butter has melted before adding another cube.

The sauce should have thickened by the time you add all the butter.

Remove saucepan from the fire and add the zest. Season to taste with salt and pepper.

It works like magic. It instantly takes away odors. It makes wiping off grease from the stove and kitchen counters so easy.

Spray Milagro before mopping then feel and see the difference.

The solution is so versatile, it has so many applications.

Milagro is made from banana stems and leaves with other all-natural elements. It is harmless to humans and animals.

The product has been tested by independent laboratories and has also been registered with and licensed by the FDA. For further information and orders, Jun Mangosing, tel. 0917-8555051. Thanks to Tina Lebron for this discovery.