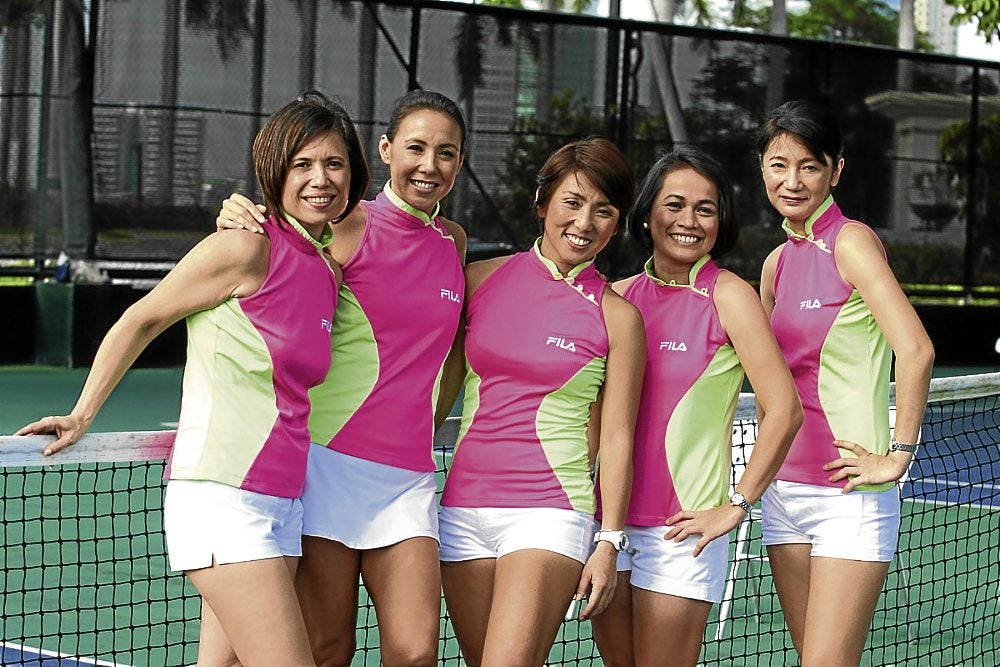 The underdog team of Class B players called the Tennis Republic recently felled the Class A Phoenix team in the prestigious Philippine Ladies Tennis League (PLTL). Tennis Republic swatted its opponent with a score of 6-4 and was consequently ranked Class A.

The promotion is a turning point for this team composed of entrepreneur and team captain Liza Alafriz; TV host Christine Jacob-Sandejas; artist-entrepreneur Rina Albert-Llamas; market-research specialist Bambi Huab; and expatriates Hiromi Shimoda and Noriko Yamada. Most of them are Alabang-based.

Alafriz consulted her teammates if they were ready to vie for Class A ranking. “We’ve been the No. 1 seed in our level for many years. We could have said no to the opportunity, but we took up the challenge. We did not expect to win. That’s what made it memorable. It’s no longer about the trophies that we got this year. It’s the first time we became champions.”

“We wanted to move up while we’re still young and while we can still run,” says Sandejas.

Alafriz adds with a giggle, “We play  doubles. At our age (30s-40s), not a lot of women play singles anymore. I don’t think our bones can take it.”

“You’ll get fit running after these ladies,” she says. Sandejas uses a  Technifibre racquet which gives her more control. She picked up the racquet seriously after giving birth to her second child.

Since her body had adapted to swimming, tennis made her burn calories much faster. Beyond the sport, she enjoys the camaraderie of the Tennis Republic. The name was coined when they were competing in tournaments under  Palms Country Club in Alabang. Since one player was not a member, they were not allowed to use the club’s name. 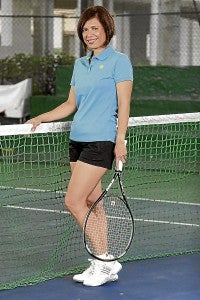 “We didn’t want to get rid of anybody; we go as a herd. Our strength is our friendship. We adopted another name. Win or lose, we are okay as long as we plan and play together,” says Sandejas.

Her teammates look up to her as a consistent base liner, if an all-around player. Says Huab on Sandejas, “When we’re partners, she sets me up with her base line shots. Once she delivers, our opponents can’t return it with an equally strong shot. The ball comes back weak so I can volley and smash.”

Although tennis keeps Sandejas’ fitness level high, it makes her prone to injuries. Off-court, she goes back to the lap pool since swimming doesn’t have impact on the joints.

“I’m a fish out of water,” says Sandejas. 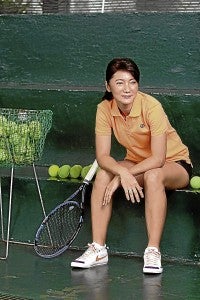 Her racquet, a Prince Silver 03, the most powerful in the brand’s lineage, enhances her already robust serves. It’s easy to maneuver regardless of one’s level of skills.

“You don’t need extra power from yourself. The racquet will do it,” she says.

Huab lauds Alafriz for her consistency and tactical moves. “Returning a strong or weak service, she keeps the ball in play. It allows us to set ourselves in the point.”

For cross training, Alafriz does Barre3, a combination of yoga, Pilates and ballet at The Spa in Alabang Town Center.

“It strengthens my core, especially my back. It keeps me in shape while I’m recovering from an injury.”

For the Japanese ladies, tennis is a social medium.

“Since I’ m a foreigner, it helped me adapt to the life here,” says Shimoda, whose circle includes Filipinos and other nationals.

“I can’t live without exercise. I used to be a ski instructor in Japan. Since there’s no snow here, I wasn’t getting any exercise. I’m glad I found tennis. I’ve made so many friends through the games. If not for tennis, I would stay at home and hang out with other Japanese. I wouldn’t go out of Alabang. Maybe I’d go to Makati once in a while to do the groceries with other Japanese just like any typical Japanese housewife. With other friends, we’ve traveled to Cebu and Osaka,” she says. Shimoda uses a Dunlop which helps her smash the ball with great precision. “I play better than before.”

“She’s our pink bunny energizer. She just keeps on going. The balls don’t die on her. She’s like the Nadal of the team,” says Alafriz.

Huab admires Shimoda’s quick reflexes. “When she stays at the back, she takes care of the ball that passes me.”

“We thought of staying for only a few years because of my husband’s business. But we’ve been here for 12 years. In Japan, you pay P1,500 to play. At the tennis court beside my house I pay only P20. Every  morning, our friends play together.” 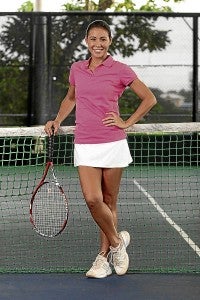 With their new ranking, Yamada, an all-around player, switched to a Head racquet for extra stability and swing.

“Noriko is strong. Once she gets the first serve, I can put it away because the ball from the opponent comes back weak and high,” says Huab.

Huab was invited to fill in for Sandejas who was then on maternity leave.

“I’ve tried the gym, but tennis offers a different thrill every time we play and when we’re with different opponents,” she says.

One of her first games with Tennis Republic was a match against the stronger teams—BF Resorts, Acropolis and Celebrity Sports Club.

“They had strong players with attitude and their partnerships were balanced. They showed their emotions in court. We had to adjust to their game and show them.”

Known for her volleys, Huab also uses a Head racquet. “When I volley or hit drop shots, it gives me better control.”

Llamas, graphics designer and owner of Rina Design, grew up in Alabang in the house of her mother Lisa Chan, but went to the Manila Polo Club (MPC) to play tennis and subsequently represented the club in tournaments. When she married Rafael Llamas, the general manager of the MPC, she moved to Makati.

This year, while playing with Shimoda at MPC, the expat overheard Llamas talking about her plans to move back to Alabang. Shimoda then invited her to join the Tennis Republic. Llamas was delighted to learn that she would reunite with coach Gani, who taught her when she was 6.

She describes her new teammates as united and nurturing. 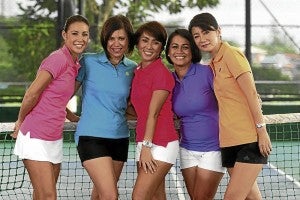 “There’s good sportsmanship. Win or lose, we keep our composure. They will never make you feel bad on an off day. I’ve played with other teams. When you’re not playing well in doubles, you partner gets upset or bummed out and sometimes makes you feel it. With this team, they’re very encouraging when you make mistakes. We get together off-court.”

She got her father Jose Maria “Butch” Albert, owner of Fila, to sponsor the Tennis Republic for the PLTL. “He was impressed and noted that we were good netters.”

“From the base line, Llamas has a strong forehand that opponents can’t return accurately. When she uses her forehand, we’re sure to score,” says Huab.

Asked why tennis is her ultimate workout, Llamas explains, “Tennis works out every part of the body part. On the treadmill, you want it to end. In tennis, you’re so focused on the game, you don’t even realize you’re burning so much calories.”