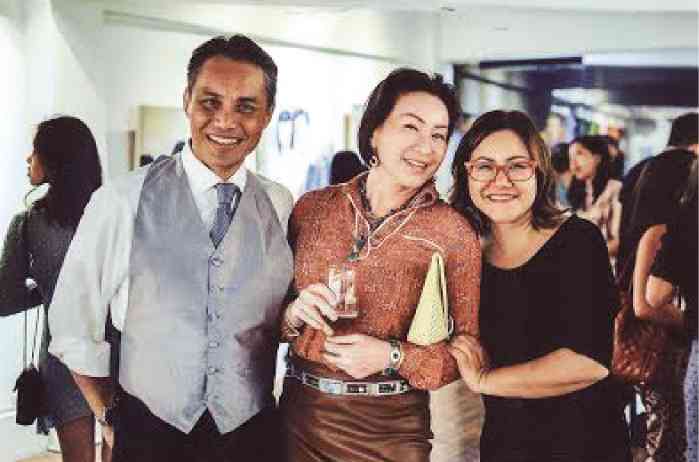 Japanese gratitude from the heart

The Consul of Japan in Cebu Shoji Otake and Mme. Naomi Otake hosted a farewell reception at the Marco Polo Plaza Hotel. The occasion also served to introduce Consul Otake’s successor, Consul Shigeyuki Hirakawa. They stood in the reception line with the Ambassador of Japan Kazuhide Ishikawa and Mme. Yoko Ishikawa.

Welcoming all at the entrance counter were Consuls Masaki Hirasawa and Toshia Yamada, with the Japanese Consulate’s secretary Maricris Suico, who announced the highlights of the evening’s official program.

First to speak was Ambassador Ishikawa, who expressed his deep appreciation for Consul Otake. The ambassador mentioned that relations between his country and the Philippines are better than ever.

More and more Japanese firms are investing in the Philippines, especially in Cebu. This is proven by the marked increase in the membership of the Japanese Chamber of Commerce in Cebu, now at an all-time high of 100.

‘Straight from the heart’

When it was Consul Otake’s turn to speak, he expressed his warm thanks for all the support he received from the Cebu community during his two-year assignment. “I really like Cebu very much,” he stated.

More and more tourists are coming from Japan to Cebu, and there has been a significant increase in the number of Japanese students, too. Before closing he reiterated his gratitude, saying in Cebuano that it was “gikan sa kasing-kasing,” which meant “straight from the heart.”

Cebu Gov. Hilario Davide III, who came with his wife Jobella Angan Davide, went up the dais to propose a toast and to present the golden key to the Province of Cebu to Ambassador Ishikawa, and special gifts for Consul Otake and Consul Hirakawa.

At that, the reception went into high gear as drinks were served and the buffet opened. Mme. Naomi Otake, dressed in a beautiful kimono, gravitated toward the ladies of the Cebu ikebana chapter.

The previous weekend, she had been their special guest at the annual ikebana exhibit held at the Atrium of the Northwing of SM City Cebu. She had also given a special demonstration on the Japanese art of flower arranging.

She was with her husband, Danao City Vice Mayor Red Durano, twin sister Carmi Luzuriaga Durano and her husband, former Tourism Secretary Ace Durano, who in turn is Red’s brother.

The Marco Polo’s general manager Julie Najar and resident manager Xavier Masson (he’s French) were present, and collecting due praise for the buffet fare. There was, aside from the Japanese tempura and sushi, an array that included excellent Quiche Lorraine and delicious siomai dumplings. The red and white wine had the Manny O label.

Qube Gallery has moved to its new location at the Crossroads Mall in Banilad. Its first show was titled “She Said” to celebrate March as Women’s Month.

The new Qube has two levels. On the ground floor is the domain of James Abilla for the tap room of his Cebu Brewery Co. which serves excellent craft beer.

The second level is for the gallery itself. Owner Maris Holopainen has a larger space to accommodate not just paintings, but also installations and sculptures.

She envisions the new art space to be a playground for experimental and young contemporary artists from Cebu and the Visayas region.