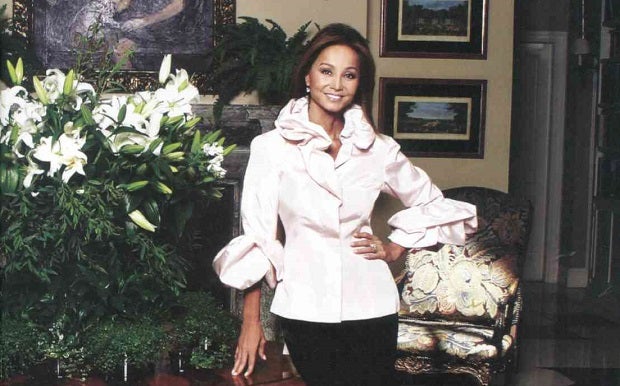 Isabel Preysler–why do men just fall for her?

Even as a young girl, Isabel Preysler already had that irresistible, hypnotic effect on the opposite sex.

The story goes that it was a deeply besotted boyfriend that forced her parents to send the then teenage model and beauty queen to Spain in the late 1960s so she could finish her studies without such unwelcome distractions.

Preysler’s close friend, Inquirer Lifestyle columnist Maurice Arcache, said hers was an effortless kind of beauty made more lethal because it was mixed with grace, elegance and intelligence.

“She’s already gorgeous in photographs, but she is even more so in person. Her eyes would twinkle when she smiled. She has charm and is very ladylike. Men would just fall for her. Even as a teenager, marami na siyang admirers,” Arcache said in an exclusive interview.

The Madrid-based Preysler recently made headlines anew when Nobel Prize recipient Mario Vargas Llosa left his wife and confidante of 50 years to be with her.

European media quoted Vargas Llosa, a novelist and politician, explaining to wife Patricia that Preysler “is not a fling like the others.”

Vargas Llosa, 79, added that he needed to be with Preysler because “I don’t have much time left.”

While Vargas Llosa is prominent in academic circles, European publications quickly noted not only Preysler’s prominence in Spain’s high society, but also her “unfading youthful looks.”

Preysler, 64, was widowed just last September, and under Philippine custom is supposed to go through a year of bereavement after the death of her third husband, Miguel Boyer, Spain’s former finance minister.

Friends in Madrid, however, said Vargas Llosa “came at the right moment,” when Preysler was depressed over Boyer’s demise.

In happier times she told friends it was only with Boyer— with whom she has a daughter, Ana—that she felt a certain level of stability and fulfillment within a marriage and a family.

“She has fallen in love many times,” Arcache said. He recalled that she also loved the boyfriend she was forced to leave in Manila. This happened after her parents, Carlos Preysler y Perez de Tagle, member of the board of directors of El Banco Español de Manila, and the former Beatriz Arrastria, got wind that the man was a womanizer.

Arcache said Preysler was with his sister Pearlie (later Vda. de Morales) when she boarded the Madrid-bound plane that would take her away from her BF. The two girls were classmates at Assumption Convent.

Arcache learned that upon landing in Spain, Preysler was handed “a bunch of roses she could hardly put her arms around.” Apparently, the lovelorn fellow placed an order as a reminder of his affection for her.

“Everybody onboard the plane thought she was a celebrity,” Arcache recalled his sister saying.

Preysler turned into a celeb soon enough. After graduating from Mary Ward University, an Irish institution, the brainy beauty was invited to join the high society circuit in Madrid.

“That circle of counts, countesses and royalty,” Arcache stressed.

This was where she met future first husband Iglesias. He was not yet a famous singer then but was a womanizer, like Preysler’s ex-boyfriend in Manila.

Barely had Enrique (who would grow up to follow in Dad’s footsteps as an international singer) crawled out of toddlerhood when Arcache received an overseas call from Preysler.

“I’m leaving Julio. I cannot take it anymore,” the columnist quoted her as saying. “From the start, she knew what he was. She thought she could change him. Her mother was against a divorce.”

And so was the rest of Spain. Arcache said the couple was already getting its share of public attention at that time—Iglesias due to his talent and Preysler for her beauty.

Arcache said sympathizers from Team Julio “insulted Isabel to death” because of her audacious decision to divorce him.

“She said, ‘It’s my life. I don’t care what anybody says… I would not waste my life on this man,’” the columnist recalled.

Soon after, a beeline of admirers appeared at the lithe beauty’s doorstep. “Nakalinya na. Really,” he recounted.

Falcó, one of those in the queue, was the next to snag her heart.

Arcache said he teased her mercilessly about Husband Number Two.

“Royalty ka na! Baka you might become queen someday,” he told her. Instantly, the bashers turned into admirers after Preysler signed her second marriage contract.

“When she became royalty, bow silang lahat. She was being invited to the really big affairs, like the Red Cross Ball in Monte Carlo. Doors opened wider than those in a cathedral!” Arcache exclaimed.

“You see, Isabel has this flirty quality. She’s not a flirt but she has this quality about her—her beauty, her eyes, the way she talks and moves that makes her attractive,” he added.

It was not all fun and games for La Preysler, as Spanish media affectionately called her.

Isabel worked as a journalist for Hola! magazine. She also hosted several television shows like the popular “Hoy en Casa.”

Call it providential but in July 1986, about the time when her marriage to Falcó was on the rocks, Vargas Llosa became one of her interview subjects for Hola!

They met in St. Louis, Missouri, where Vargas Llosa was invited by George Washington University for a series of lectures.

That time, Preysler’s questions to the writer not only reflected her intelligence. She also asked him whether he wanted his efforts to be recognized with a Nobel Prize.

Vargas Llosa at the time replied that a writer should not engage “with the prize in mind,” lest he “spoil his vocation” with “ambition” and “temptation.”

She also asked him to describe his literary development; whether he thinks his writing “becomes better with the passage of time,” to what extent his works are autobiographical, and whether living in Spain had influenced his life and work.

Vanity Fair Spain, in an article written by Boris Izaguirre in December 2010, noted that Preysler’s “mixture of beauty and intelligence” calls attention, adding that her closeness to royalty elicits “a certain curiosity” about her.

The magazine may have understated the level of curiosity. Observers note that since Preysler became a public figure, Spain has displayed a “hypnotic fascination” with her that was “unexplainable.”

One publication noted that she was “obsessively monitored by the paparazzi.” Her circle of friends eventually grew to include the Spanish royal family, Prince Charles and wife Camilla, David and Victoria Beckham and Hollywood actor George Clooney.

She also caught the eye of Giorgio Armani, who at one point offered her to become one of his models. She refused.

“I have no more stamina. I can walk once or twice on the ramp but more than that, no,” Arcache quoted her as saying.

The columnist said Preysler and Falcó eventually grew apart but their divorce was amicable. Their union produced daughter Tamara. It was the most short-lived among her three marriages.

“They remain the best of friends. Later there were more suitors who followed her wherever she went,” Arcache said.

Rumor has it that she was already seeing future third husband Miguel Boyer even before her divorce with Falcó became final in 1987.

The gossip mill also went into overdrive before Preysler and Boyer exchanged “I do’s,” because the Spanish executive was still married to his first wife when he began dating the Filipino-Spanish beauty.

Preysler and Boyer married in 1987. It was her longest marriage and, friends noted, also her happiest. Their time was cut short only by Boyer’s death of pulmonary embolism in September 2014.

It was said that Boyer considered his alluring wife a secret weapon when he was still active in government. Arcache said there were instances when Boyer sent her ahead “like an advance party” to conferences abroad to meet with the executives he was supposed to talk to.

“She would sweep the men off their feet, so whatever issue concerning the government was approved right away. No ifs, no buts,” the columnist noted.

Her activities were not limited to socials. She made use of her prominence to espouse charitable causes.

In 1989 Preysler was voted honorary president of the Spanish Association of Sports, Leisure and Recreation for the Mentally Handicapped. She held the post for two years.

In 2006 she received the Women Together Award along with Hillary Clinton, Yoko Ono and singer Shakira for her philanthropic contributions.

“She would be invited to a lot of events. She donated whatever they would pay her to charity,” Arcache said.

He said that Preysler was already married to Boyer when she was paired with Clooney to endorse Porcelanosa tiles.

“Tongues started wagging that they would end up together. But she’s such a nice person. She was so happy with Boyer,” Arcache said.

“Understandably, she was very depressed when Boyer died. She was really in love with him,” he added.

Vargas Llosa’s reentry into Preysler’s life could not have come at a better time, Arcache said. “He helped her a lot to forget about her depression. He came at the right time. And like all the other men, he just went gaga over her.”