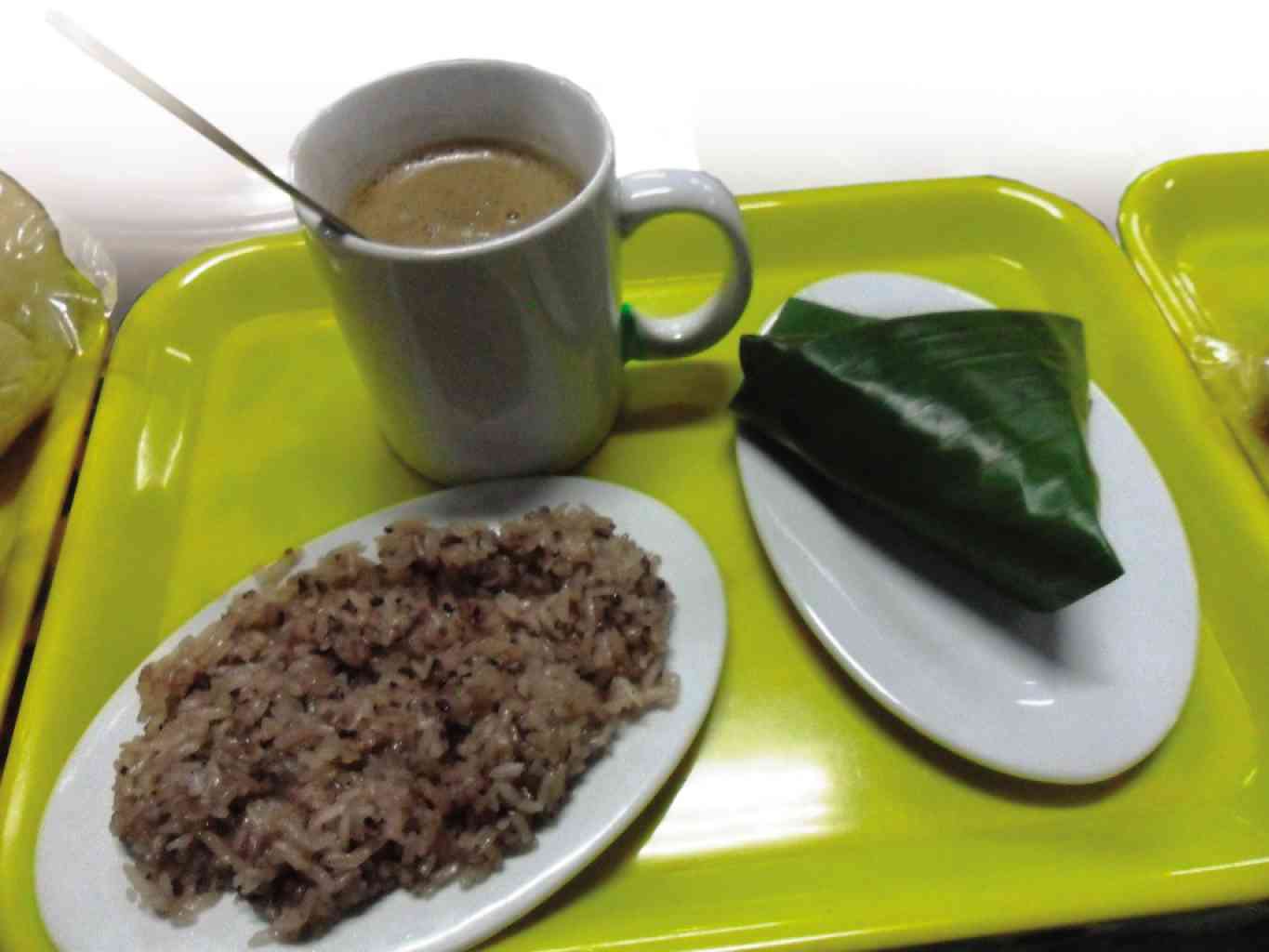 It’s not every time that I can visit the wet market in every city and town I go to. But when I do, it’s always an adventure.

At the recent culinary competition in Cagayan de Oro City called Kumbira, we remembered a market trip years ago, and decided to have breakfast at Cogon, which is how the market is called there.

The market looks the same; it still is dark inside, a bit crowded between stalls. And the place we had breakfast last time was also still there, the benches facing the spot the two most important items are cooked: puto maya and sikwate (chocolate drink).

At Nanol’s, it was still Fe who was cooking the puto maya using violet sticky rice. She said they cook two sacks daily. The recipe includes coconut milk, sugar and a bit of ginger, which is what makes puto maya different from other kakanin (rice cakes).

When we arrived, one big pot was at that stage known as in-in, or steaming under slow charcoal fire to be fully cooked.

The cooked puto maya will be shaped into triangles and wrapped in banana leaves. And it’s best paired with sikwate. My breakfast cost a total of P23—P15 for the chocolate and P8 for the puto maya.

Sometimes customers want the puto maya placed between bread, like a sandwich; another unusual pairing, carbs on carbs. The folks there call it puto bread.

A huge molinera (chocolate mixer) was creating froth in a huge pot of sikwate, operated by Jennifer, who looks like her mother. Her mom, the owner of the place, used to serve us but she was better at pouring the beverage an arm’s length above her head like a chai wallah. But the takeout chocolate is still placed in empty milk cans, with the top opened until only a bit of metal holds the top in place, so there will still be a cover.

A bit of a walk, and we got to the vegetable section. Our guide told the vendor we were interested in the ingredients for kinilaw (pickled seafood). The vendor produced a packet of ready ingredients—tabon-tabon, suwa, calamansi, chili.

The tabon-tabon is a hard-shelled fruit that, when opened, shows a whitish interior that is then scraped and added to the kinilaw, to help with digestion. The suwa is a sweet-smelling lime.

There were also plastic containers that contained bahal, or coconut vinegar that is still sweetish because it hasn’t fully fermented. Then there were containers where the vinegar was frothing, which meant it was already sour. That state is called tanduay in Paombong, Bulacan, a place likewise known for its nipa vinegar.

The vendor told us to wash the seafood, whether fish or shrimps, with sour vinegar, then throw away that vinegar, put in the bahal with the prepared ingredients, then season with salt and pepper. Coconut milk can be added.

Further on were pails that contained guinamos (shrimp and fish pastes). The shrimp pastes were colored a dark pink, and there were two kinds—those still whole and those that had been mashed. At another stall, a vendor was crushing the fish with a lusong, a big wooden pounder.

Huge fish was being cut in another area. The malasugue (marlin) was cut so neatly the pieces looked like huge sashimi.

On one side of Cogon are the dining stalls that serve halal food, cooked according to Muslim recipes. Here, everyone is welcome to taste chicken cooked in turmeric, or fish cooked fried or as paksiw. I couldn’t really tell what the other dishes were.

Moving to another section, we came to the dried fish—so many kinds of them, including squid called lansang, and the small longish variety nicknamed ballpen. I must have looked amused, because someone commented that squid contained ink, after all.

A big fish was identified as parrot fish. It goes by different names in different regions—mulmul in the Visayas, muymuy in Surigao, lipti in Cagayan de Oro.

We ended the visit in the dry goods section. From there, a surprisingly affordable malong is now among my collection of native wear.