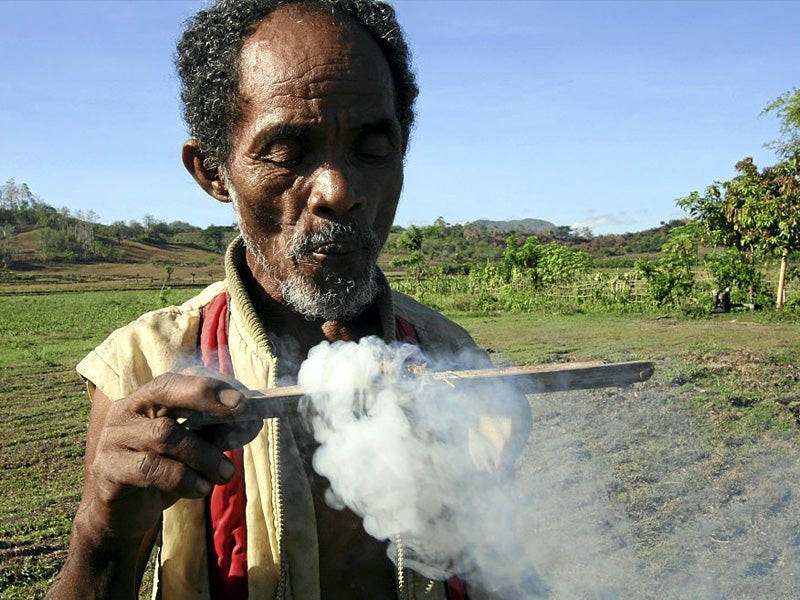 Smoked wild boar, a root crop that can be deadly when cooked improperly, and a tuber considered as effective as “Viagra.”

These were just some of the indigenous dishes served during the first Aeta Forest Foods Festival held recently in Capas, Tarlac.

The event dubbed Mam-eh, the Aeta word for sharing, was said to be the first ever Aeta Festival to be held in the country. It gathered over 350 participants from different Aeta and Agta communities in Tarlac, Zambales, Pampanga, Quezon, Aurora and Camarines Norte for a celebration of stories, culture and modern-day challenges.

“There’s not much attention given to the fantastic food that many of these people have in the forest,” said Jenne de Beer, a field fellow at the International Society of Ethnobiology (ISE), who was among those who conceptualized the festival. The idea for the festival evolved from campfire discussions with local leaders, he added.

Said Young: “We joined one of the gathering parties of Aetas and saw that there’s really a lot of knowledge that they can share about traditional hunting and gathering practices.”

According to research by KAKAI, rice, wild bananas, wild beans, root crops like kamoteng kahoy (cassava)  and kamoteng baging (mountain yams), and corn are the primary crops that Aetas plant.

One dish called kalot, a tuber derived from yam that grows in mountainous areas, has to be carefully prepared to ensure that it’s safe to eat. According to Young, kalot can cause dizziness if cooked improperly and can be poisonous and fatal if eaten raw. The light-yellow crop undergoes an intense preparation of soaking, shredding and drying before it is finally cooked inside a hollow bamboo stalk.

Labit, another elongated root crop is said to be valued traditionally for its vaunted aphrodisiac properties.

De Beer said that since indigenous root crops are planted in different soil, many are genetically different and have a much richer taste.

During field visits, he observed how root crops are carefully dug out of the soil and replanted to ensure sustainability.

Wild bananas known as amukaw have black seeds which are strained out and turned into banana juice, which de Beer described as “very refreshing.”

During the festival, baboy ramo (wild boar) was also cooked and served several ways – grilled and tied into cubes with strands of bamboo stalks with a taste similar to lechon, as very salty tapa (dried venison), and boiled in a soup. The latter tastes similar to the beef nilaga of lowlanders. The Agta and Dumagat tribes from Southern Luzon, who traveled more than ten hours to get to the festival, also brought freshwater crabs and mollusks.

Explained de Beer: “The wild boar thrives here while the wild banana is a pioneer species and is quite abundant. But for big scale events like these, we don’t encourage the hunting of bayawak (monitor lizards) and snakes.”

Young shared how one community that contributed the wild boar to the feast really lives the traditional life of hunting and gathering in the mountains. Composed of just 20 families, the tribe has managed to keep their traditions.

Food has remained traditional too.  In some of the more remote mountainous villages, frogs, monitor lizards and snakes are part of the indigenous diet, while cloud rats, which are found in the woods and forests, are considered a delicacy.

The eruption of Mt. Pinatubo has somehow changed the eating habits of some tribes, however.  Displaced by the volcanic eruption, some of the younger generations who live in resettlement areas have gotten used to “lowlander” food.

Bayani Sumaolong, Aeta chieftain of Barangay (village) Sta. Juliana where the festival was held, noted how important it is to preserve Aeta culture.

“This is a good opportunity to get together and share our knowledge about traditional food from the forest, as well as our cultural practices,” he said in Filipino.

Aside from highlighting their food, the Aetas demonstrated various indigenous dances specific to different regions. They also demonstrated various survival skills and cultural expressions, including the use of traditional medicine, singing, sign language and sustainable agriculture.

Aeta tribesmen took part as well in an archery contest using handmade wooden bow and arrows with steady and moving targets, like the cutout of a wild boar pulled on a string.

Survival skills like traditional fire-making using different techniques also proved a winner among the guests.  Among the men, shaved wood put inside half a bamboo stick which they blow on until a spark is lit is the common practice. Meanwhile, women use a flint-like rock that they strike together to start a fire for cooking.

The event gave Aeta leaders a chance to discuss issues of concern, including indigenous rights, health, livelihood and their rightful claim to ancestral domain.

A dialogue during the festival brought them together with various government agencies, politicians and civil society groups.

“The Aeta leaders were very happy that for the first time in their lives, they were able to hold a dialogue with government leaders to discuss their issues. It was a big triumph for them just to be able to express themselves,” said Young.

De Beer, who works in the areas of forest conservation, sustainable management of resources, and income generation, noted the great potential  of food available in the mountains, which he described as “beyond organic.”

“People (from the affluent sector of society) used to look down on wild food but now are willing to pay extra for this in restaurants. You increasingly see wild rice and other traditional foods making their way into restaurants in the city. Through festivals like these, we can show how superior and special forest foods are,” said De Beer.