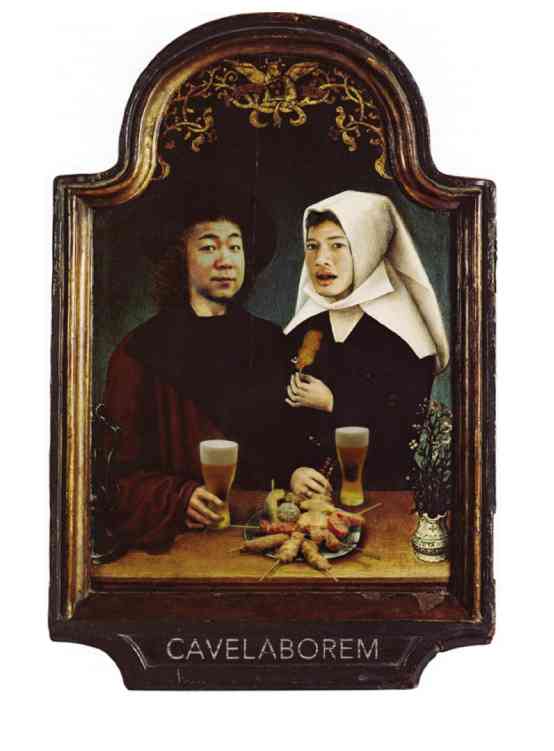 Over the years, erstwhile model Borgy Manotoc has appeared less and less in the public eye, giving fewer and fewer interviews. So when his sister Mavis Fuentabella told me back in July that he was having a private trunk show for his first men’s line, I had to admit, I was intrigued.

Borgy has been working in retail since 2010, with his streetwear and sneakers store Bunker, and then as a distributor for Doc Martens, which opened as a pop-up in 2011.

Based on those two stores alone, I was expecting Cavelaborem, the men’s wear he created with Japanese designer Takashi Uokawa, to be a line of T-shirts with bold, graphic prints on them.

Instead, I was surprised to find some elegant men’s pyjamas, a few long-sleeved tops made of white mesh, and the most beautiful clutch made of supple leather (was it lamb suede?) that folded and opened like a common brown paper bag.

I begged and pestered him to sell me that clutch, and after putting it on hold for two weeks, I returned only to have my friend Carla talk me out of buying it.

“Your fingers will just stain the leather,” she reasoned.

But isn’t that what luxury is about? Owning things that aren’t exactly practical? I still think about that clutch from time to time.

And now, after two months, Manotoc will be launching Cavelaborem officially this weekend. In honor of the occasion, I’ve been granted a gratuitous e-mail interview with the man of the hour.

How did you and Takashi Uokawa meet?

Takashi and I met here in Manila. I still remember a few years ago when my sister Mavis was at the last minute insisting I come over to meet this Japanese designer. When we were first introduced, overcoming the language barrier was difficult, but it was clear we had a similar passionate, yet carefree perspective on life. And after a few more meetings and a few cocktails I knew I had made a real friend.

How did the idea of working together come about?

I started the year by reaching out to Takashi in the hope that he would be open to working with me in any capacity. I made some childlike drawings of what I thought could be a small collection of tops and some pyjamas. I included some details but was expecting many questions and revisions.

Takashi later told me that he too agreed my drawings were childlike, but he felt something good about the project and our collaboration. When you begin something with a level of understanding beyond words, it makes everything easier.

Where did the name Cavelaborem come from?

We both felt that things needed to be done in time and that the creative process cannot be forced. And so I lucked upon the Latin phrase “cave laborem,” which means, “to beware of work.” We thought it was the simplest way to reflect all our ideas.

I have always pursued the nuances of the world. Searching for all sorts of surprises in people, things and places. And most especially the combinations that shouldn’t seem to fit, but manage to find the balance. Eventually, we arrived at the question of how to balance life and work. Takashi used to take fewer then 10 days off a year. And I have been heavily influenced by the capitalist world where if you’re not slaving away, you’re failing.

What part of the process did you enjoy most?

We had the chance to visit our suit manufacturer in Italy earlier this year. It was the family’s first time in Italy and I was scared and excited to show them around.

What are your plans for the line?

Our first collection is slated for spring/summer 2016. And we plan to release the line in Japan and the Philippines. The men’s wear market is growing so quickly that it is difficult to find your place in it. We want to work only with a few retailers with similar goals and priorities. Our plans for Manila distribution are still to be determined but the products may be available as early as December.

To read the rest of our interview with Borgy, visit Preen.ph.