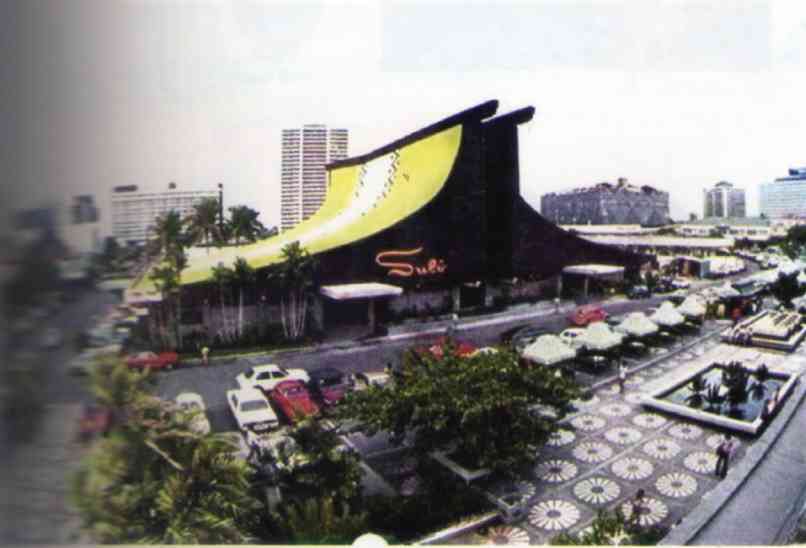 Fifty years of Sulô, Maya Kitchen and The Plaza

This year seems a time for reminiscing. Two books have been published celebrating two Filipino food industry icons— Maya Kitchen of Liberty Commodities and Sulô Restaurant. The Plaza also celebrated its 50th year this month with a party, while Via Mare is on its 40th year.

“Sulô” (Anvil Publishing, 2015) is written by Erlinda Enriquez Panlilio, whose parents, Trinidad and Modesto Enriquez, transformed themselves from teachers to restaurant proprietors.

The couple started with an eatery called D&E in Quezon City. To this day, my siblings won’t let me forget how I told them those letters stood for Dine & Eat, until they found out that the letters were the surnames of the two founders—Diaz & Enriquez.

D&E was known for its Filipino food offerings. When the Makati Commercial Center was being planned, the Enriquezes were invited to open there. But they were told that their place had to be higher-end to attract the A class from the Makati offices and Forbes Park.

And so Sulô was born, its name derived from the torch that welcomes visitors to the home during celebrations; the restaurant design, however, suggested the sweeping roof of a Muslim home. Sulu is, after all, the name of the southern islands, home of the Tausugs.

Panlilio is an award-winning writer. Because she worked at Sulô, she knew the inside stories of its clientele, its food, its staff. The book reads like the society columns of yesteryears. For those who want to know the history of Makati, the book details the restaurants, theaters and department stores during the 1960s to the 1980s.

For culinary students, the dishes and drinks Sulô served and the catering menus show the preferences of that period, and how little has changed from 50 years ago.

For the home cook, instant mixes are a boon. My go-to breakfast has always been Maya Hotcake Mix. Just add water and egg—and yet one felt like a great cook.

“Simply Delicious: 50 Years of Good Food from Maya” (Anvil Publishing, 2015) celebrates the great idea of how to sell the product of the mother company, Liberty Flour Mills, directly to the consumer. Apart from mixes, there was the Maya Bakeshop, then the Maya Kitchen, where cooking demos and sessions were conducted by great chefs.

That was followed by the company’s best public relations stunt, The Great Maya Cookfest.

It was an honor to serve as one of the judges of the Cookfest, and my picture in the book looked like it was taken about 50 pounds ago. Nora Daza, trimedia culinary star of the time, was the contest’s face. Prizes included trips to the US and France, and Daza accompanied the winners, her beautiful towering figure amazing the overseas hosts, according to the winners I interviewed.

Jessie Sincioco, now known as Chef Jessie, had her hair in a ponytail when she won first place in baking in 1983 with her recipe, My Tita’s Special Treat. Then, on a research trip to Zamboanga City, we met Myrna Innocencio, baking winner in 1977, for the Pineapple Meringue Cake with Honey Lemon Sauce. She opened a bakeshop in her hometown, serving wonderful cakes and pastries for more than 30 years.

While the Cookfest has ceased, the Maya Kitchen still conducts cooking lessons in the Arnaiz Avenue, Makati, office of Liberty Commodities. The Kitchen has trained many of the bakeshop stalwarts in Manila and will undoubtedly produce many more food entrepreneurs. Rory Subida is the woman behind its great success, both in planning the lessons and testing recipes.

Browsing through the book’s recipes brings to mind the Best Desserts event held last Monday at the SMX Convention Center at SM Aura, a sugar-high tasting of many home bakers’ treats documented in the book by Inquirer food writer Vangie Baga-Reyes.

Also 50 years ago, The Plaza was founded by Joe Reyes and Imelda Albano. However, it was the Reyes matriarch who started it all—the Aristocrat’s Engracia Cruz Reyes, or Aling Asiang. The third and fourth generation now runs The Plaza, Millie Reyes and daughter Karla.

In the ’60s, The Plaza and Sulô were the imposing buildings at the new Makati Commercial Center. Those of my generation will remember The Plaza’s winding driveway through which cars would deposit guests of weddings and debuts, the major social events of the time.

Millie Reyes said she didn’t celebrate her 18th birthday there as she was in school in Switzerland. She did mention celebrities who did and who had their wedding receptions there.

The Plaza Premium Ham was among its well-known products, along with corned beef, roast beef and pastrami.

The huge Plaza complex closed in 1983; the company moved to Greenbelt until the contract expired in 2004. But the catering which Millie said her mother began continues; it’s also the food service concessionaire for special events at places such as the Wack Wack Golf and Country Club, where the 50th anniversary was celebrated.

Millie is confident that The Plaza will still be around for years, with the innovations they have introduced. “My brother, Ray, has introduced his beer can chicken, salmon in cedar plank and smoked baby back ribs,” she says.

“Karla has her salted caramel cheesecake and scallops with green pea sauce, to name a few.”

Perhaps Via Mare would also have celebrated its 40th anniversary, but its soul and one of its founders, Glenda Rosales Barretto, has been busy preparing and catering for the Asia Pacific Economic Cooperation summit since the beginning of 2015.

When she can take a breather, Barretto will get to sit down and write the Via Mare story, from its founding in 1975 with partners who included her husband, Pancho Barretto, Peping and Carol Roño, Efren and Judith Bautista, Lazaro V. Tolosa, and Alberto and Fely Arceo.

She will recall her first catering (a birthday party), then down the years to today, from small receptions to huge events at the Philippine International Convention Center numbering thousands.

She will no doubt recall how dishes were created, her major culinary victories at international expos and her experience as judge at the prestigious Bocuse d’Or.

Note: The Doreen Gamboa Fernandez Food Writing Award deadline has been extended to Nov. 30. The request comes from readers asking for an extension, as the subject “herbs” is not easy to research.

E-mail the author at pinoyfood04[email protected]