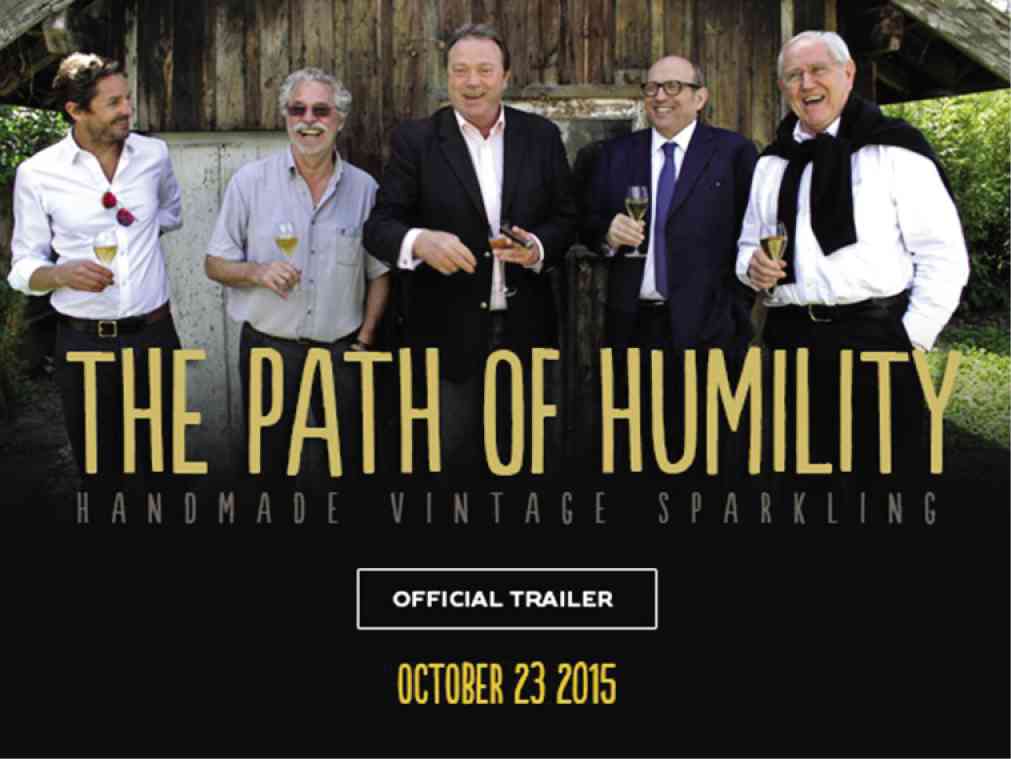 Probably the newest marketing gimmick is to declare a special day for a certain product. Very recently it was Coffee Day, which I would have missed if I didn’t see the announcement on TV.

Then I received an e-mail about Oct. 23 as supposedly Champagne Day. That made me curious, especially when it said, “Watch the film.” So I did.

It takes a while to connect the film, “The Path of Humility,” to champagne because the sparkling wine itself evokes opulence, high living, expensive tastes.

The film’s title comes from Claude Giraud, 12th-generation scion of the Giraud-Hemart family that runs the Henri Giraud Champagne house in Ay of the Champagne region in France.

The camera shows him going to the wineries of people who do “handmade sparkling vintage,” incidentally the film’s subtitle.

The people tell him what steps they have done to make their sparkling wines outstanding, share their techniques, the lessons they’ve learned— how they do their work with passion.

And that passion is what Giraud wants his fellow winemakers in Champagne to regain—to stop being complacent just because their product sells.

“Do the best,” Giraud says, “follow your gut feeling, don’t give up, don’t listen to all the warning signs. That’s the path of humility.”

The five producers of sparkling wines featured in the film said they look to Champagne to be leaders in their quest for excellence, but they’ve experienced moving faster toward really improving the quality of their products. They may not mind now that their wines are not called “champagne” (a ruling states that only wines from the Champagne region may be called that). But they have imposed stricter rules on themselves, will not rest on their laurels, and continue to try finding better ways to produce the best.

Most of all, they let quality sell, and not because of marketing efforts. They all agree that what they produce are not imitations of champagne but sparkling wines with their own personalities and style, since each place is different, the grape varieties are different, the soil and the climate are different.

In Italy, it’s Mauricio Zanella of Ca’ del Bosco that’s trailblazing with his Franciacorta sparkling wine. He explains how his vineyard has gone organic not because it will make the wines better, but rather ensure the sustainability of his vineyard and the earth.

Giraud also learns from Zanella about cooling the grapes after harvesting and washing with pressurized water—not only a requirement of going organic, but also to remove most of the copper content which, Zanella says, isn’t good for the body.

In Catalonia, Spain, Josep Maria Raventos i Blanc and his son Manuel have been producing their sparkling wine, Conca del Rio Anoia, in a land where the Cava reigns. The first hurdle was to convince their neighbors that they were serious, and the Cava producer authorities that they wanted to be different by using local grape varieties. But even if their wines are now considered among the best in the world, they display no sense of self-importance; they say they are just winemakers.

While English vineyards are rare nowadays, they did exist centuries ago, established by the Romans. The Gusbourne Estate in Appledore, Kent, dates back to the 15th century; owner Andrew Weeber bought it only in 2004, yet his Blanc de Blancs 2007 has won gold at the Decanter World Wine Awards.

In the film, Weeber touches on climate, which Giraud says should be separate from terroir, which really just includes soil. Giraud is also surprised when Weeber reveals that his wines don’t rest in oak barrels.

Jacky Blot has his vineyard Taille aux Loups in Loire Valley, France, and he is specific about his grape variety, Chenin Blanc. He has experimented with it, tried various ways to get to his goal of producing outstanding sparkling wine. And he has done that with Triple Zero, a product that “entranced” wine writer Jancis Robinson. He even had the many types of yeast found in his farm analyzed, so he could use only the best for the wine he wants to make.

Quite unusual that this film released on Champagne Day is really about wines that aren’t from Champagne. But the film was only the documentation.

Before that, in April, Giraud invited the four handmade sparkling vintage makers to present their vision, their problems and victories to a gathering of more than 200 experts in Champagne, hoping to spur not only wine producers in that part of France but also throughout the world on their own “path of humility.”

A cousin brought wines from Australia from Gooree Park, an estate owned by businessman Eduardo Cojuangco. Located in McLaren Vale, it is a stud farm, a vineyard (and probably a mango orchard) and is the site of major events like the Melbourne Cup held Nov. 3, and included parades and a three-course lunch with wines.

What we had was a special limited-edition shiraz cabernet sauvignon, the Ethos 1998, named after one of Cojuangco’s thoroughbreds. It’s a smooth red. One novice drinker’s assessment was that it’s good because it didn’t give him a headache.