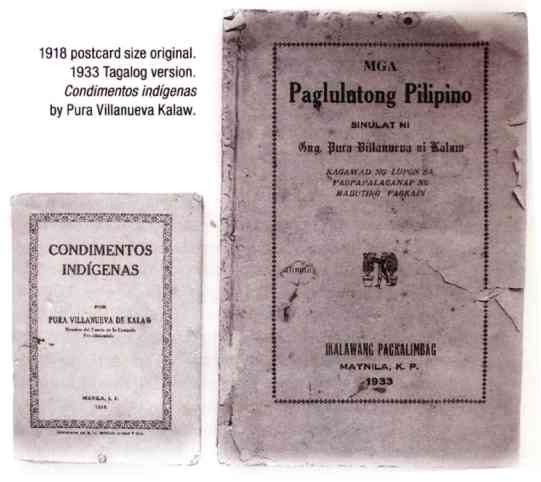 Why cookbooks are essential to Filipino history and self-identity

At lunch last year in Paniqui, Tarlac, the host showed me a cookbook printed by the Metropolitan Press in 1939 that was translated from the original Tagalog by a Valentina Basilio. It was a surprise to see that Filipinos still cook the dishes of the prewar period.

For many people, a cookbook is a guide for their own cooking. But for me, it is more an indicator of what people liked to cook during a particular period, and what was served at the table in homes, both for everyday cooking and for special occasions.

Felice Prudente Sta. Maria took a more academic approach when she presented a paper, “Early Philippine Cookbooks: Savors of Cultural Concern,” at the 23rd Annual Manila Studies Conference in 2014. Her paper not only listed the early cookbooks but also what those showed us about our Filipino identity.

The word pacsiu surprised me, because I always thought that was the Waray term for paksiw (vinegar stew); the only place I had heard that word used was in Leyte.

In 1918, the next important cookbook was published. “Condimentos Indigenas” by Pura Villanueva Kalaw had contributions from different regions and provinces—Batangas, Cebu, Ilocos, Pasig, Sorsogon and Mindanao.

Doreen Gamboa Fernandez wrote that Kalaw had made the book so that she could buy her husband a billiard table, which he needed for exercise to lower his blood pressure (“A Cookbook and a Billiard Table”). Considering how travel through our archipelago was not easy with our geography, it was exceptional how the field research for “Condimentos” was achieved.

Among the women who contributed, Fernandez mentioned a Ms Shuck of Mindanao, a name I recall was mentioned by a friend who was related to them and whose family lived in Jolo. Wow, even as far as that!

There were American women associations that also published cookbooks, the recipes shared by their members. Among them was by The American Guardian Association (1922), whose editor was Elsie Gaches, then director of Nurses and Principal of the Philippine General Hospital (PGH) School of Nursing. (She donated the land in what is now known as Elsie Gaches Village in Alabang, a home for paraplegics.)

It was reprinted in 1978 by Regal Printing, retitled “Culinary Arts in the Tropics, Circa 1922,” edited by Carlos Quirino, who at the time was chair of the Filipiniana Book Guild.

While many of the recipes were contributions from Americans, there was a section on Filipino dishes edited by two Filipino women nurses who graduated from the PGH. Cooking sinigang, kilawin, paksiw and guisado were among the procedures featured.

Here at last I found a recipe for pakam, an old dish from Bulacan mentioned to me by Conrad Calalang, which involves chicken cooked in vinegar, salt and pepper until dry; fried with garlic, onion, tomatoes and patis; then boiled with water and radish after. It’s not something I have tasted or seen cooked, but I am hoping Calalang will one day do this for me.

Today we have culinary schools all over, but they hardly preserve our way of cooking, since Filipino cuisine is not taught in the curriculum. I am heartened by reports, however, that some enlightened schools have started to do that by making a comprehensive lesson plan in the manner of French cooking lessons.

In the old days there were Home Economics courses, along with the cooking schools spawned by commercial establishments (Manila Cooking Gas, for instance).

The most famous Home Economics graduate and cooking school directress was Nora Villanueva Daza. Her “Let’s Cook with Nora” is still the biggest selling cookbook, its recipes still recreated in households. It has Filipino dishes and recipes with foreign influences—Spanish, American, Chinese, Italian. But when cooked in our homes, the dishes become Filipino, because their flavors are what suit us, and the ingredients we use depend on what we can get in the market or groceries.

Daza wrote the introduction to “Culinary Arts in the Tropics, Circa 1922.” She made the observation, in 1978, that “the current popularity of Filipino food in grand parties and buffets and the proliferation of Filipino restaurants… is a new phenomenon.”

It is a very good sign, she further observed: “The Filipino is wending his way to finding his new identity, at least in his food habits.”

Almost 40 years after, we can say Filipino food has come around, appreciated internationally while still cooked in our homes. Because of the variety of regional cooking, we will keep getting surprised by what has been and what will still be recorded in cookbooks.