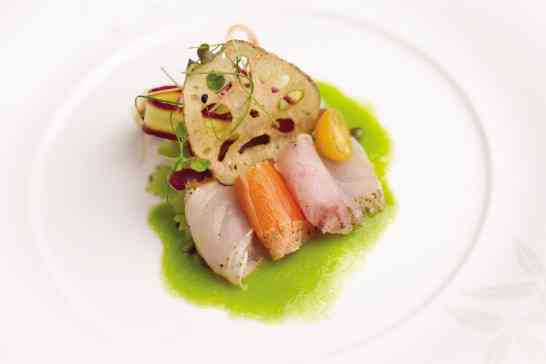 The word must have spread across town that chef Nobu Matsuhisa would host dinner for one night only. So it became full house in the restaurant Nobu Manila City of Dreams, requiring two sittings at every table, with some tables having hardly enough space between diners.

The chef’s visits are rare since he has restaurant branches all over the world. As of last count, there are 32 Nobu and five Matsuhisa restaurants. Matsuhisa is owned by his family while Nobu is in partnership with actor Robert de Niro, producer Meir Teper and restaurateur Drew Nieporent.

When a Japanese dish is served, especially in high-end dining places, it is always expected to be a work of art, the presentation minimalist but compelling. It induces a quiet moment of appreciation.

And so it was with each of the eight courses.

The first was Duo, a small rounded serving of prime-quality tuna, toro sashimi tartare topped with caviar and an oyster tiradito, the latter a Peruvian way of adding a spicy sauce for fresh seafood.

One expected the Peruvian influence since chef Nobu’s credentials include opening a restaurant in that South American country where he improvised by using local ingredients and applied flavors preferred in Peru.

A flute of champagne, a Pol Rogers Brut Reserve, completed the taste profile of the course.

The assorted sushi was more traditional but the Nobu-style had the ingredients either a bit passed through fire like the striped horse mackerel (shima aji) and the shrimp body or fried crisp like the shrimp head.

The atsuyaki tamago, a sweeter version of the egg sushi with a texture of custard, had its top seared-toasted and carried the Nobu name.

One of the best whites we’ve ever had was served next, a Clarendelle Blanc 2012 from Bordeaux. We were grateful that it stayed with us for the next three courses.

The color of a red snapper (sakura-dai) must have inspired Nobu to call the next dish Cherry Blossom. The fish was cut paper-thin, making it translucent and rested on a cherry leaf processed so it is easily edible. Flavor was enhanced by flakes of dry miso, one of chef Nobu’s food products.

All the seafood courses served as lessons on fish varieties. More so with the next course, Sashimi Salad, each fish presented rolled into a cylinder. There was fluke that is much like a flounder, a jack known as kampachi said to be a good substitute for tuna and trout from the clear and clean Tasmanian waters. The green dressing wasn’t wasabi but made from jalapeño for a different kind of hotness.

A more familiar Chilean sea bass came next, milky meat with the skin toasted to a crisp. A cube of it rested on a sauce flavored with truffle, corn and aji Amarillo, a yellow-orange chili that is used in Peruvian cuisine, another reminder from chef Nobu of his culinary background.

A  Clarendelle Pessac-Leognan 2008 from Bordeaux was brought in to accompany the only meat course of the evening. It was grilled Japanese A5 Wagyu indicating the highest quality rating for a steak. The sauce was a reduction of black garlic, soy and mirin.

It was a surprise at first that soup was served near the end instead of the beginning of the meal. But it became logical when after partaking of it the feeling of fullness was reduced. It was akadashi, a kind of miso soup but this one made of red miso, that had asari clam (of the variety also called Manila clam) and the amber-colored wild Nameko mushrooms.

Our palate was ready for something sweet. We didn’t know what to make of Miso Cappuccino as the menu indicated. But it was quite Western in taste, a cool sort of chocolate drink with foam on top and some crunchy bits inside it. What was a wonder was the plate art on which the dessert cup was placed, a rendering of a tree that had chocolate branches and sweet red dots representing the fruit. That needed to be tasted and it was.

I had eaten Nobu food without him but it was different with him there. Yes, he is the master after all and yet there was something more to it.  A look into his website gave the answer. It iskokoro, the Japanese word for heart. He stressed how he always puts his heart into his cooking.