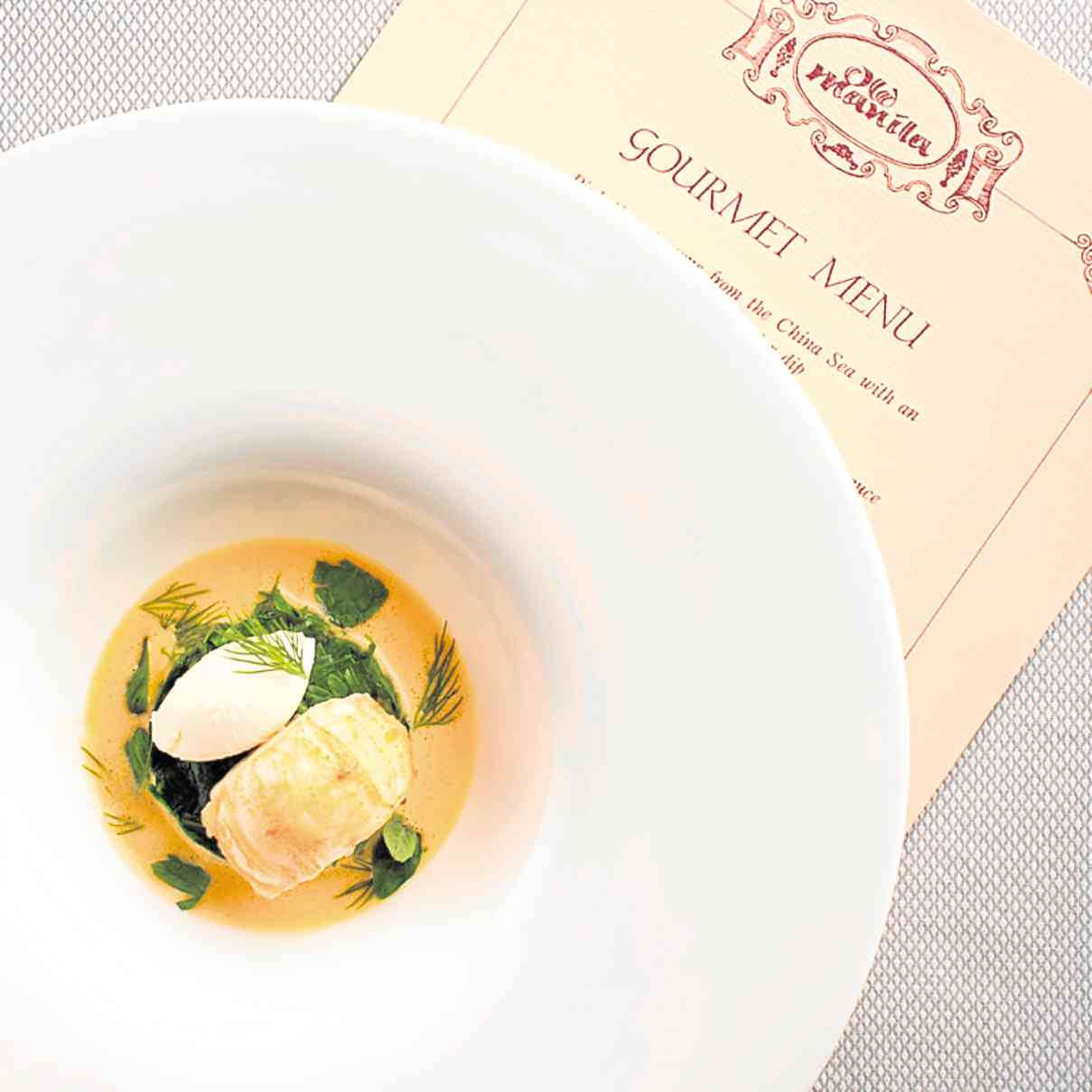 The Orchestra was playing “I’m Always Chasing Rainbows,” whose melody is adapted from Frédéric Chopin’s “Fantaisie-Impromptu.” It seemed the appropriate background music as we walked down The Peninsula Manila lobby to the hotel’s Old Manila restaurant, but sans the dancing steps.

The “Sunburst” sculpture enhanced the ambience. A rainbow will not exist without the sun, after all.

“Sunburst” was replicated on the amuse-bouche plate by Old Manila’s chef de cuisine Bertrand Charles. He made a spiral circle with the sauce and laid out marinated organic salmon following the same semicircular pattern with intersecting leaves and petals.

Nothing will do, he said, but the best ingredients: “I am working with only a few suppliers who can assure me of the freshest Dover sole, Bresse chicken flown in from France, live Brittany Atlantic blue lobster, wild Atlantic salmon, the most tender milk-fed Dordogne veal, among other fresh and usually inaccessible produce.”

Charles also made it clear that even if the menu that evening was to celebrate Old Manila’s—and the hotel’s—40th year, he tweaked its decades-old dishes.

Apparently the prices had to be updated as well; we were aghast to find items in the old menu costing below P100.

The salmon really worked up our appetite for the other dishes in “Best of the Best in Old Manila,” a special a la carte and degustation menu.

The restaurant has an updated black-and-white scheme, stark but neat. It has actually gone through several redesigns—the ceiling lamps and checkered floor of the 1970s were replaced with warm, wooden floors and panels in the ’90s.

For the new millennium, a lot of color was added, with the glass sculptures of Impy Pilapil, plus the painted people pictures on seat covers inspired by the Felix at The Peninsula Hong Kong.

Throughout dinner, Charles  showed not only the best of Old Manila’s 40 years but also his story. The first course was what he called his lucky dish—pan-seared foie gras with caramelized apple but with the twist of yellowfin tuna and pickled ginger, Japanese and French together on the plate.

He wanted to let us taste what he served his boss then, Michelin chef Jean Pierre Vigato of Restaurant Apicius. This dish led to his being chosen to be part of the new resort property in Mauritius.

The smoked slipper lobster literally smoked as its transparent cover was lifted—bit of drama there, that seems to be a trend. The lobster was surrounded with a dill-specked yellow sauce made with mascarpone and butter-enriched with Espelette pepper, a chili grown in France that is said to resemble paprika in flavor.

But the chef added a seafood course for one of us allergic to crustaceans. He made a traditional scallops a la Parissiene, baked shellfish covered with mushroom béchamel sauce.

For the meat course, the chef had to be sure none of us was averse to eating rabbit because he had prepared Lapin a la Moutarde, rabbit cooked in Pommery Mustard. Served as roulade, it was accompanied by a Grenache from the Domaine Du Grand Arc in Corbieres, France.

There was no time to breathe and a long plate of chocolate dessert, a trio of white, milk and dark in different forms, made me gasp. After so much food, dessert was more than I could handle.

Perhaps 40 years ago the several courses would have been just right for me even if the quantity went beyond tasting portions.

How odd also that two other institutions I know have marked 40 years as well.

Via Mare had its ruby anniversary last year, while the Philippine government and the People’s Republic of China marked the 40th year of diplomatic relations in 2015 with a cake-cutting ceremony in Xian, Shaanxi Province. The ’70s were a decade of start-ups, it seems.