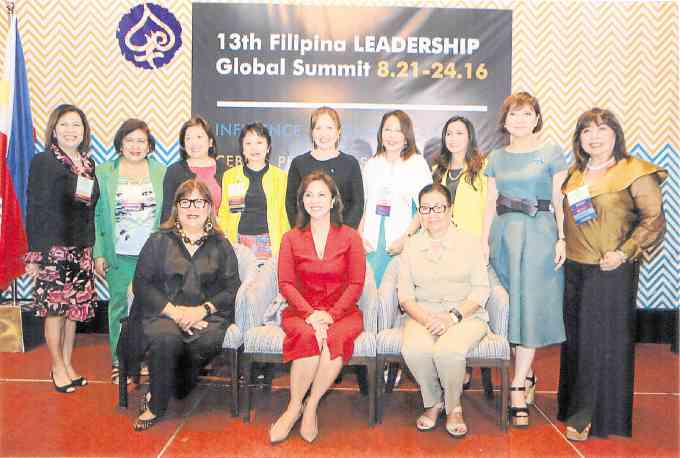 SEATED are FilipinaWomen’s Network founder and CEO Marily Mondejar, Vice President Leni Robredo, Cebu Vice Governor AgnesMagpale. With them are members of the steering committee for the FWN summit recently held in Cebu.

The Marco Polo Plaza Hotel, led by its general manager Julie Najar, hosted an elegant dinner for members of the Filipina Women’s Network (FWN) captained by Marily Mondejar, its founder and CEO.

Mondejar established the FWN 13 years ago in San Francisco, California, and now it is a global organization with chapters all over the world.

A large delegation came to Cebu for the 13th Filipina Leadership Global Summit. It was an occasion to announce their choice of the one hundred Most Influential Filipinas all over the world.

Add to them the Tatler’s Chit Lijauco and Raquel Hizon of Propa PR consultancy services, who made sure the FWN ladies met the Cebu lifestyle press.

Najar was congratulated for the menu served. She had told executive chef Stefano Verrillo and Joward Tongco, the Marco Polo Cebu’s manager for restaurants, bars and events, to make it extra special.

The Manok Binacol caused a sensation with chicken tinola served on a freshly cut young coconut. It was fun spooning the delicious tender coconut meat. There were king prawns with banana flowers, and chicken adobo the Cebuano way, plus the typical Cebuano humba,  pork belly braised on a slow fire.

Dessert featured maja blanca and ice cream made with langka and flavored with sampaguita petals. To complete the meal there was Cebu tables pralines.

The FWN ladies had four intense days in Cebu. The night previous to the Marco Polo dinner they were feted at a “salo-salo” celebration by Cebu Governor Hilario Davide III and Vice Governor Agnes Magpale.

It was held at the social hall of the Provincial Capitol with performance by varied contingents from different cities and municipalities all over the province.

On the third day, they had the opening of the plenary session at the Shangri-La’s Mactan Resort & Spa. Keynote speaker was Vice President Leni Robredo, cited by FWN as the Most Influential Filipina of all.

Later in the day, at an evening gala also at the Shangri-La, was the awarding ceremony. Main speaker was one of the awardees, lawyer Lorna Kapunan. Awardees came from Australia, Belgium, Italy, New Zealand, Norway, Singapore, South Korea, Switzerland, Taiwan, United Arab Emirates, the United States and the Philippines.

On the last day, Aug. 24, Michel and Amparito Lhuillier hosted a Filipiniana dinner at their scenic home in Maria Luisa Estate Park for all the delegates and awardees. A splendid buffet of Filipino specialties was served by Pino restaurant.

To burn those calories there was nonstop dance music. At one point the ladies formed a conga line that snaked its way around the lawn, and precariously by the edge of the swimming pool. The fun lasted until the crack of dawn.

Patron Tequila, one of Mexico’s best, is now bottled in elegant crystal decanters by Lalique of France. Only 500 have been issued and some of them are available in Cebu. Rustan’s launched it at the department store in Ayala Center Cebu one Saturday afternoon.

It was a fun party what with varied versions of the Patron Tequila served for tasting. Explaining the various flavors was Milton Alatorre, Patron’s regional director for marketing and commercial strategy in Asia Pacific.

Rustan’s Cebu store manager Pepet Macachor was there along with staff members Teija Lacson, Malu Lim, Sybil Gualberto and Angelie Dolina who is in charge of the Lalique line.