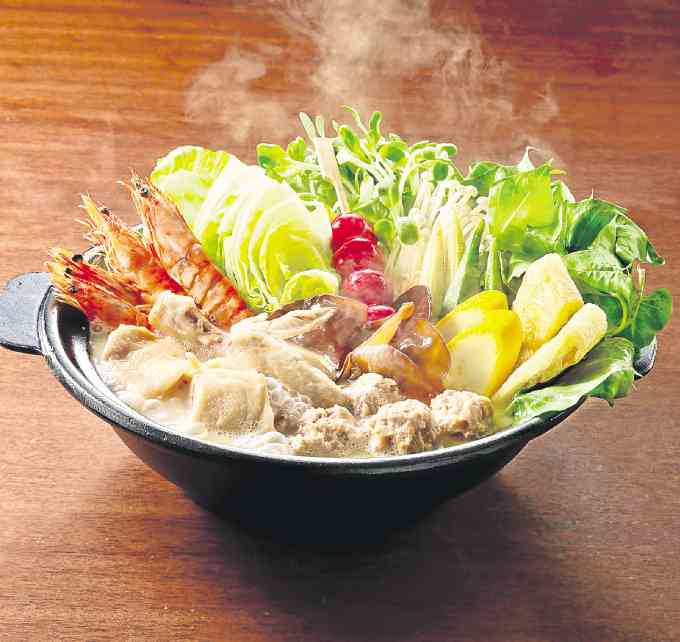 The restaurant prides itself with its “beauty” collagen stock, made from only three ingredients—chicken bones, salt and water.

The type of chicken used greatly affects the outcome of the dish. Erika Lim of Tsukada  Nojo says, “There are 60 different breeds of Jidori chicken and Jittoko is one of them.  We use mainly Miyazaki Jittoko for our nabe.”

To make the soup, the three ingredients are simmered for over eight hours. The long cooking process results in stock that, when cooled, solidifies into what looks like milky gelatin, aptly called collagen pudding.

The puddings are regularly transported from Japan under stringent conditions.

Dining at Tsukada Nojo is experiential. From the moment the cast-iron pot with silky collagen pudding is presented, the meal turns interesting.

The magic begins once the pot is heated and the collagen puddings slowly melt away, to what is, prized golden Jidori soup.

The lady servers, who are trained to journey with you through the beauty feast, hand out tasting portions of the broth in its purest form to savor.

The soup is robust, intense, rich, milky and full of depth.

Shortly after the ceremonial broth tasting, pieces of locally grown organic chicken, that was tucked underneath the pudding mound, is served.

A piece of bamboo filled with minced chicken meat is presented to us. The Tori tsukune (fresh chicken balls) are shaped before our eyes with the use of a wooden spoon, and then gently dropped to cook in the stock.

Lastly, yuzu peel is added to perfume the stock.

The sunflower sprouts give the dish a nutty, citrusy, sweet hint.

The fried tofu is wonderfully tasty after having absorbed the broth.

The hotpot is meant to be enjoyed in a strict sequence. Each time a new ingredient is added and the stock is left to simmer, its character changes, becoming multidimensional, layered with varied flavors.

The nabe is served with four condiments to enhance and give a twist to the dish: Japanese soy sauce; leek oil made from leeks and chopped chives; yuzu kosho, a fermented seasoning in paste form made with grated yuzu peel, salt and chili peppers; and chili oil, the restaurant’s own blend of chili, garlic, red peppers and sambal sauce.

The leek oil compliments the chicken, while the yuzu kosho cuts through the richness of the soup. I enjoy my broth drizzled with soy sauce.

Toward the end of the meal, one is made to pick between noodle soup and zosui (Japanese rice soup). If one favors noodles, these are cooked and served ahead of the shrimps. If one opts for zosui, the sequence is to cook the shrimps before the rice is added.

The zosui, to me, is the most comforting and scrumptious part of the meal. It’s a well-deserved wait, having saved the best for last.

The rice—left to cook in what is by that time, a reduced, highly concentrated broth—is phenomenal!  Imagine rice sopped in delectable prawn bisque. Heavenly.

I recommend pairing sake with the nabe to tickle and refresh the palate, in between bites.

The beauty hotpot dining experience lasts for an hour. It is a very Zen type of meal that is meant to be relished and not devoured.

I personally find the bijin nabe ritual to be pleasurable and enriching.

But whether you leave Tsukada Nojo looking more youthful than when you stepped in remains debatable. Though my friends and I do feel pretty after the meal.

In any case, laughter, time spent with people you hold dear, learning new things, sharing a healthy meal, are all essential in our quest for true beauty.

More on the menu

There is more to Tsukada Nojo than bijin nabe.

On the menu is the juicy Nanban fried chicken, coated in a light egg batter, served with homemade tartar sauce. It’s a traditional Miyazaki dish.

The Nikumaki Onigari is worth trying—rice balls wrapped in pork belly, glazed with a special soy sauce and baked until golden in color. Smoky and sweet, the rice treats come in four variants.

It was, however, the fried eggplant that takes my fancy. Spiced and dipped in a light batter, it’s like an eggplant French fry of sorts—crisp on the outside, creamy and delicate as silken tofu on the inside.