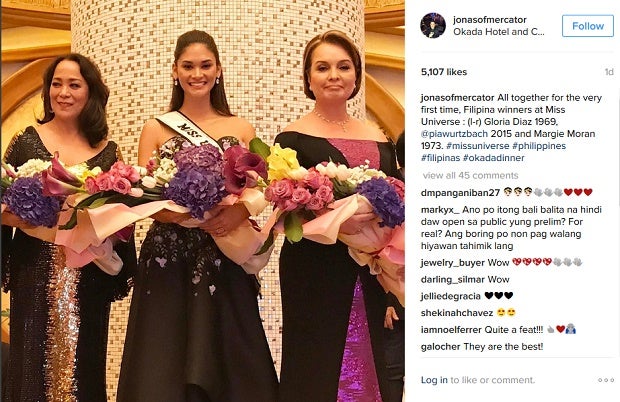 The stage shone with all three queens slaying together.

In the photo, the ladies were seen holding up bouquet of flowers.

READ: What happened to Gloria Diaz and Margie Moran after their Miss U reigns

According to reports, Wurtzbach in her speech said she was nervous to stand up on stage with her idols, but she considered it an honor to be beside the country’s former Miss Universe queens.

“First of all, this is the first time all three of us are together, so I’m a bit nervous right now,” Wurtzbach said.

“It’s truly an honor to be standing next to these two iconic ladies who I just used to watch on TV, and now I’m standing beside them, so thank you,” she added.

Pia is the third Filipina to win the crown, ending a title drought of 42 years for the Philippines.
WATCH: Pia Wurtzbach finally gets long overdue Miss Universe walk

The Philippines last took home the crown in 1973, courtesy of  Moran. It was a short wait after the victory of Diaz in 1969.

Wurtzbach won the most controversial Miss Universe in history after its host Steve Harvey wrongly crowned Miss Colombia Ariadna Gutierrez. Gutierrez had to be decrowned on live telecast to give way to the rightful queen.

Wurtzbach has led an advocacy for HIV awareness during her one-year reign.

After she turns over the crown, Wurtzbach would be serving as a Miss Universe ambassador and was also set to appear as special guest in the fifth cycle of the model search “Asia’s Next Top Model.”
Recently, Diaz’s daughter Isabelle Daza channelled her mom’s Miss Universe 1969 look during Tim Yap’s 40th birthday bash. RAM