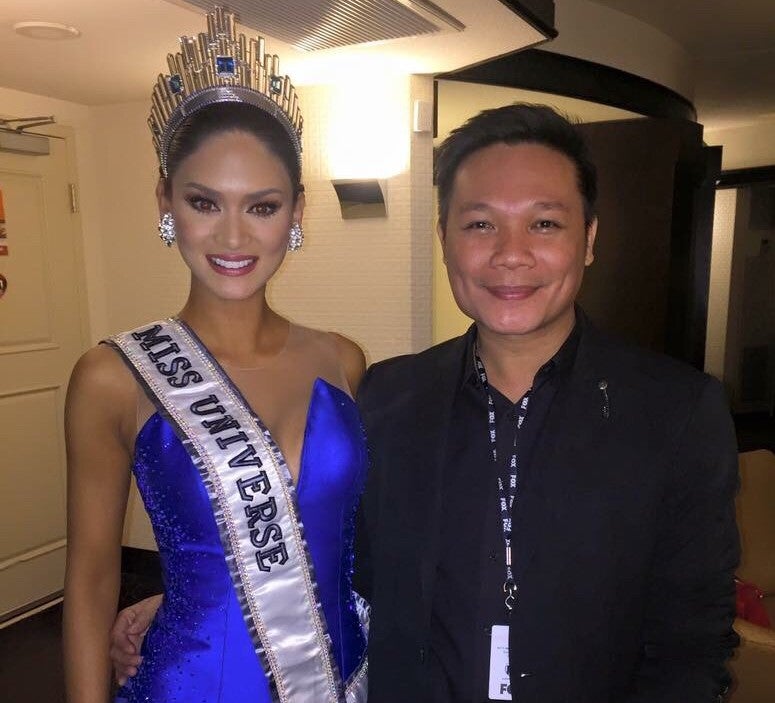 For beauty queen maker Jonas Gaffud, who was behind Pia Wurtzbach’s win as Miss Universe 2015, the country’s candidate Maxine Medina has more than a million chances of winning.

This as he reacted to Miss Universe 1969 Gloria Diaz’s statement that Medina has only a “one in a million chance” of winning this year’s beauty pageant, especially because the Philippines was the host country.

READ: Gloria Diaz kay Maxine Medina: Her chance is one in a million!!!

At the sidelines of the dinner tribute for Pia on Sunday night at the Harbor Tent, Sofitel Manila, Gaffud said history would refute Diaz’s statement.

Gaffud recounted that Puerto Rico’s bet won the Miss Universe in 2001 even though it was the host country.

The United States also won the Miss Universe titles even though it was the host country, he added.

“It happened once in Puerto Rico in 2001, if you set aside the US host country,” Gaffud said.

Gaffud spoke to reporters at the sidelines of the dinner tribute which Gaffud’s modeling agency Mercator prepared for Pia. At the dinner, Pia was given a tribute through a musical number about her journey to the Miss Universe.

WATCH: Pia Wurtzbach gets tribute as ‘Queen of the Universe’

Gaffud said Maxine was a strong candidate despite the bashing over her communication skills.

“She’s a very strong candidate,” Gaffud said, referring to Puerto Rico. “And I think Maxine is the same.”

As to the calls for Maxine to have an interpreter, Gaffud would not give a categorical answer, but said there was nothing wrong with getting an interpreter.

“I think it’s about time that we answer in a way that we can tell the judges what we want to. Kung mas madali para sa kaniya (if that would be easier for her), why not?” Gaffud said.

He said there would be nothing wrong if Maxine spoke in a mix of English and Filipino and still get an interpreter.

“Kung may interpreter, nag-Taglish siya, mas maiintindihan niyo, dapat hindi natin ikahiya yun (If there is an interpreter, and she speaks in Taglish, so that we can all understand, then we should not be ashamed of that),” Gaffud said.

Maxine had said she was open to having an interpreter, while describing Tagalog as a “beautiful language.”

READ: Maxine Medina: ‘I will request a translator if I have to’

After online backlash over her statement, Diaz clarified that she only meant that the Philippines had slim chances of winning because, as the host country, it would be perceived as a biased decision if the Philippines got a back-to-back victory.

“We’re the host. Can you imagine if we make our representative win? Eh ‘di magwawala lahat ng candidates (The candidates would make a ruckus) and also their countries, their ambassadors? And they would all think that we are unfair,” Diaz said according to an ABS-CBN report.

Diaz however believes Maxine can still get a first runner-up finish, even though this would be perceived as a “hometown decision.”

“I believe she can be first runner-up, pero mahirap naman (that would be difficult), parang hometown decision. It’s parang biased, ano?”  CBB