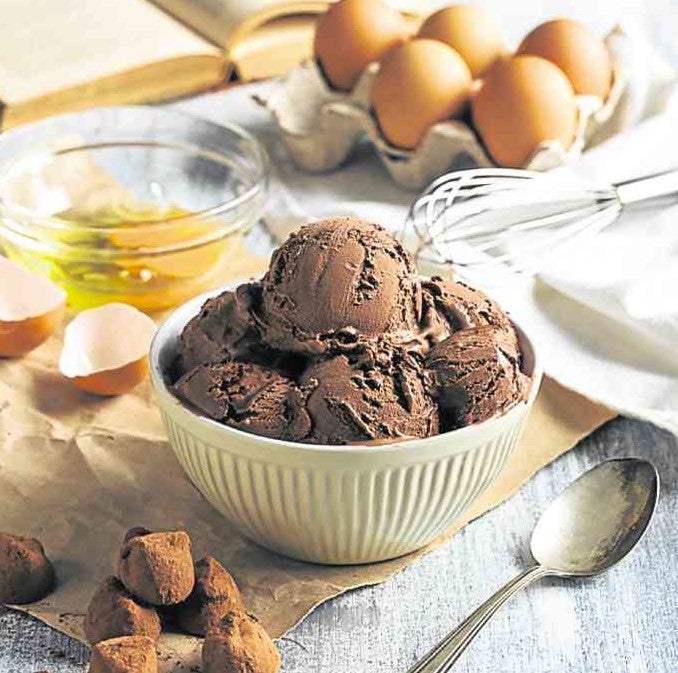 Why launch a new ice cream line on a cold month?

What timing—in the middle of a cold spell, a premium ice cream brand launched its newest product.

Fruits in Ice Cream’s (FIC) latest line, custard, adds egg yolk to its basic ice cream recipe, resulting in a richer, creamier mix. It is also denser due to professional equipment that keeps away the air that makes regular ice cream fluffy and light.

Appropriately, FIC’s first four flavors on its newest line—Vanilla Bean, Espresso, Dark Chocolate Truffle and Mantecado Real—were displayed frozen in an ice block. The tasting involved a scoop of each, plain, then used as part of a dessert concoction.

As we tasted the creamier line, we were informed that the Vanilla ice cream uses real vanilla beans; the Espresso is from quality Arabica coffee beans with the nibs mixed in; and the Dark Chocolate Truffle is made with Belgian chocolate with truffle bits.

Mantecado is familiar to those of a certain age. The old folk said it was really Filipino vanilla. But, as a child, I wanted fruity flavors and didn’t care for mantecado.

But I changed my mind after tasting FIC’s Mantecado; it had that undoubtedly butterscotch flavor reminiscent of a favorite candy.

Partaking of premium ice cream brought to mind Calvin Trillin’s piece, “Competitions,” about the tiff between Häagen-Dazs and Ben & Jerry’s, two “superpremium” ice cream brands in America. Both made the same kind of quality ice cream that FIC would also make in the Philippines.

FIC differentiated itself by using fresh products and old recipes that contain egg yolks, and removing much of the air from the ice cream.

Häagen-Dazs was founded by Reuben Mattus, while Ben Cohen and Jerry Greenfield founded the brand that carries their first names. Trillin’s descriptions of the owners show how disparate their characters are.

Mattus is the “prototypical immigrant entrepreneur—the plugger who overcomes his lack of education and connections and capital with tenacity and shrewdness and an enormous capacity for hard work and one simply brilliant idea.”

Cohen is “the hippie entrepreneur” who finds the world so weird that people like him and Greenfield are considered “respectable businessmen.”

Brand packaging also showed how different the two were. Mattus placed a map of Scandinavia on his brand and invented the name Häagen-Dazs because it seemed like a Scandinavian name, and particularly Danish since Denmark is considered a land of milk.

His idea was to offer a high-end product to a market that wanted quality, instead of competing in a crowded field of regular ice cream brands.

Ben & Jerry’s carried the founders’ pictures, which, while not exactly attractive in their shaggy look, showed the founders as real people.

Their initial plan was just to sell on college campuses. But when the product became a hit, there came a need to expand to bigger marketplaces.

That was the beginning of the tiff, because Häagen-Dazs, sold to the giant conglomerate Pillsbury Company, tried to prevent its outlet dealers from selling Ben & Jerry’s products.

Trillin recounted the suit, the unusual campaign of Ben & Jerry’s to put its cause before the people through advertising. The slogan “What’s the Doughboy Afraid Of?” became the stuff of advertising lore. The suit was settled out of court.

Mattus, who at the time remained chair of Häagen-Dazs, claimed the suit was just the opposing camp’s publicity stunt.

Today, Ben & Jerry’s Homemade is a subsidiary of an equally big conglomerate, Unilever.

Rereading “Competitions” gave me the answer to why FIC launched a “cold” product in the cold season. Cohen had a theory: “New Englanders, who live in one of the coldest parts of the US, eat the most ice cream per capita because what makes people feel cold is not air temperature, as is commonly believed, but the difference between air temperature and body temperature—a difference that can be reduced by a steady intake of ice cream.”

I have to tell that to The Food People, the company that makes FIC—Jose Celdran, Osang Custodio, Vivien Ongkiko and Edgardo Garcia. They started operations 20 years ago, banking on their experience in the ice cream field, all of them having worked in a big food and beverage company for its domestic and international marketing divisions.

Celdran, the president, recounted that the FIC international market began with the company selling ice cream with tropical fruit flavors to other countries, while the domestic market started with private dealers selling the product in upscale residential communities. Today there are popular scooping stations in major malls.

FIC Custard Ice Cream will be available in March at supermarkets.