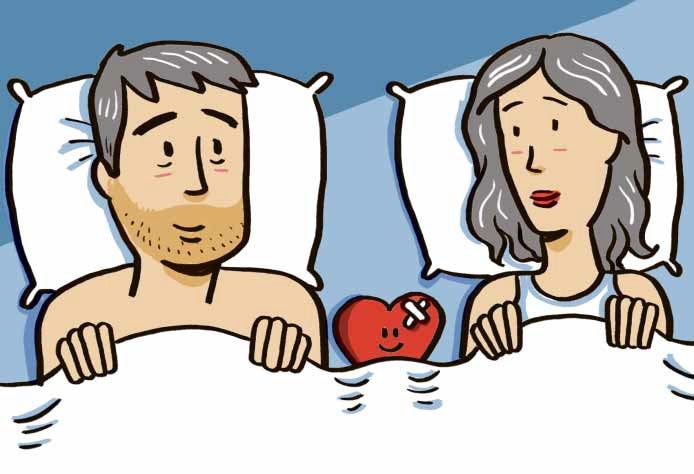 How risky is sex for heart patients? Last week, a middle-aged patient we treated after he suffered a heart attack a year ago came to the clinic for a follow-up. Since the heart attack, he has not experienced chest pains.

He has been playing golf twice a week, without using a golf cart at times. His repeat tests showed almost normal heart function.

I advised him to continue all the medicines he was taking. “We’ll see you again in six months,” I told him.

But as I stood up and extended my hand, he replied: “Wait, Doctor, there’s something important that I want to discuss with you …”

I sat down again and listened as he related that, since his heart attack, he and his wife have not had sex, for fear it might trigger another heart attack. There has always been that haunting scenario in his and his wife’s mind where he suddenly would clutch his chest as they made love and then he’d slump over as his wife freezes in panic, not knowing what to do.

He said that this has severely affected their quality of life, and made him more ill-tempered. There were times he felt depressed.

I almost melted in my seat in embarrassment, for my grave sin of omission. I apologized to our patient for not discussing this concern earlier. It should have spared him and his wife from more than a year of unnecessary anguish.

As penance, I promised to write about it so that other heart patients in similar situations could be enlightened.

It’s a common misconception that the sexual act imposes an extremely heavy stress on the heart, putting one at risk of heart attack or heart failure.

The truth is, having a heated argument with someone is much more stressful for a diseased heart than having sex with one’s spouse or partner.

However, having illicit sex, particularly with an “unfamiliar partner,” is an entirely different story.

Most likely because of the fear of getting caught, or the pressure to impress the unfamiliar partner, the adrenaline rush is simply too much, and this could trigger another heart attack.

The burden or workload on the heart during regular sex (not acrobatic sex) is fairly equivalent to stair climbing. So we usually ask the heart patient if he or she can climb two flights of stairs without experiencing chest pains or shortness of breath.

Alternatively, we can ask if they can walk briskly at least four regular blocks. If the patients reply that they can, they’re ready to resume sexual intimacy with their “familiar partner.”

Speaking of familiarity, the sexual activity should ideally be done initially in a familiar place, usually one’s own home and on one’s own bed.

Other causes of a potential problem during the sexual act are: doing it after a heavy meal or several rounds of alcohol and skipping one’s maintenance medicines because they may cause erectile dysfunction (ED). It’s safer to just take drugs for ED like sildenafil rather than skip important heart pills.

If one is taking nitrates to relieve chest pains, however, combining it with sildenafil and similar anti-ED drugs can cause severe hypotension or low blood pressure that may trigger a heart attack.

To assess more accurately the readiness of the heart patient for sex and other activities, we usually request a stress test, in which the patient walks fast or jogs on a treadmill until symptoms or significant abnormalities on the electrocardiogram tracing are noted.

Every level or stage of the stress test is equivalent to certain activities like the sex act, which the patient can safely engage in.

Taking the test and passing it also gives the heart patient and the spouse the confidence that can make them more relaxed as they become more intimate, unburdened by the unfounded fear that having sex is risky or worry that the patient is still not physically ready for it.

The bottom line is that most heart patients can safely resume sexual intimacy with their spouse as early as two weeks after a heart attack or heart surgery.

If there are no recurring chest pains and shortness of breath during ordinary physical exertion, the flame of love can burn again.

We’re at the halfway mark of our month-long blood pressure (BP) screening nationwide to help increase awareness about the perils of high BP, which can cause heart attacks and heart failure, among other things.

Doctors, nurses and even lay volunteers who know how to check the BP can still participate in this landmark international BP screening survey, for which the Philippines has been designated as one of the lead countries.