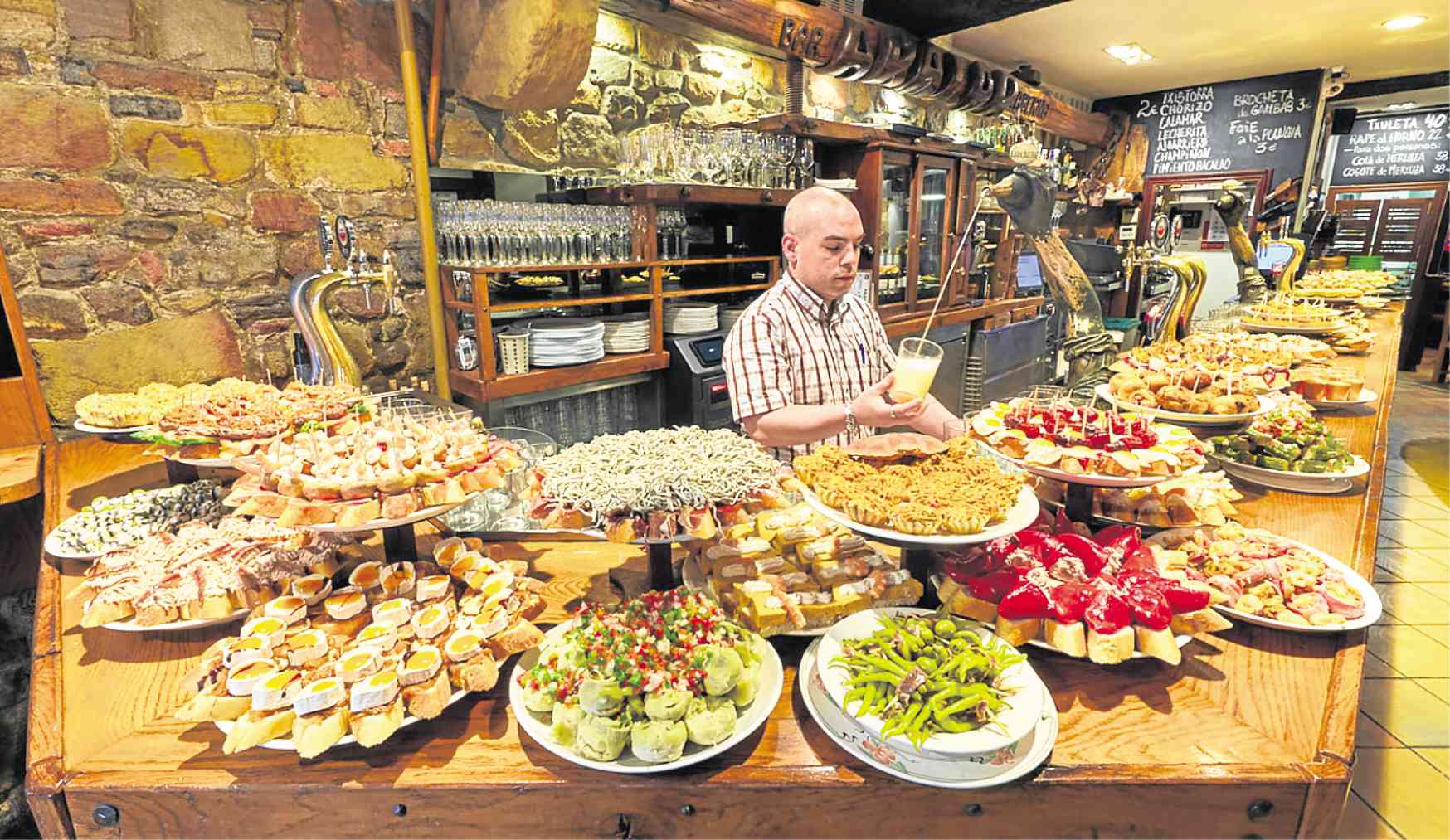 ‘Pintxos’ of San Sebastian: More than finger food, it’s a way of life

Wandering around the old city of San Sebastián in Spain is an experience, especially if your quest is to eat well.

The streets are lined with cafés and restaurants ready to satisfy the simplest or the most discriminating palate.

In the old town, numerous bars serve enticing pintxos (bite-size finger food) and tapas that are difficult to resist.

I spent an afternoon with Spanish restaurateur David Garrancho touring his bars, culminating with a visit to his restaurant.

Our first stop was Meson Portaletas, proclaimed as the best tapas and pintxos bar in 2015 at the competition dubbed Campeonato de Euskadi. One of the pintxos the restaurant presented at the event was a tempura with shiitake pintxo, which was also hailed as the best pintxo.

I was enchanted by the sight of the beautifully prepared pintxos that adorned the bar. I noticed how, every so often, someone would restock the spread and replace with a fresh batch the trays that had been sitting for a while.

There is hardly anything fancy about the way the fish and meats are cooked. They are simply seasoned and grilled to absolute perfection.

David said the Basque way of cooking relies on the mastery and knowledge of how to bring an ingredient to light with as little manipulation as possible.

In between pintxos, croquetas de jamon and sips of cava, our conversation swiftly shifted to the pintxo culture.

There is something magical, David said, about the pintxos experience. It is the informality, the relaxed attitude that revolves around its enjoyment that makes it special.

He pointed out that it is customary to have a pintxo, a quick snack with a copa (a drink) and leave, which is why many bars have more cocktail tables than dining tables with chairs.

David explained that the manner in which the locals partake of it posts a problem for tired tourists, who have spent the day exploring, and would rather sit comfortably while enjoying a plateful of pintxos.

Basques regard the eating of pintxos as a way of life—an integral part of their culture and tradition.

Their collection of pintxos ranges from the classics made with guindilla chilies, olives, gherkins and anchovies, to the more elaborate and modern.

In David’s opinion, a good pintxo is the kind that can be consumed in two bites, must be delicious and eaten without utensils.

Shortly after, another restaurant specialty, txangurro, was served. The dish is made of flaked crab, sautéed in olive oil, garlic, onions, leeks, tomatoes, finished with a little fish stock.

The meat is stuffed in a clean crab shell and then baked. The txangurro tasted as I expected it—simple but with an intense crab flavor. “With the use of the freshest ingredients, little work is needed,” David said.

We walked on nearby Calle Puerto to Bar Aralar. It was packed and, like Portaletas, serves tapas and pintxos. The food and ambiance between both David’s bars were totally different.

Glasses of cava were again brought to our table, with lecheritas de cordero (lightly breaded and fried lamb sweetbreads). It was phenomenal! It was creamy, buttery and melted in my mouth.

The light squeezing of lemon juice cut through the richness. It was so heavenly that it still lingers in my mind.

Next stop was Juanito Kojua, the oldest restaurant in the old quarter established in 1947, and just a few steps from Aralar. When Grupo Garrancho acquired the restaurant, it made sure the establishment remained as it was. Apart from the classics, its specialties include fish and dishes made from the finest local and seasonal produce.

The delicate Cocochas de Merluza (hake cheeks) with Piquillo peppers is a dish created without much fanfare, yet every bite was sheer delight.