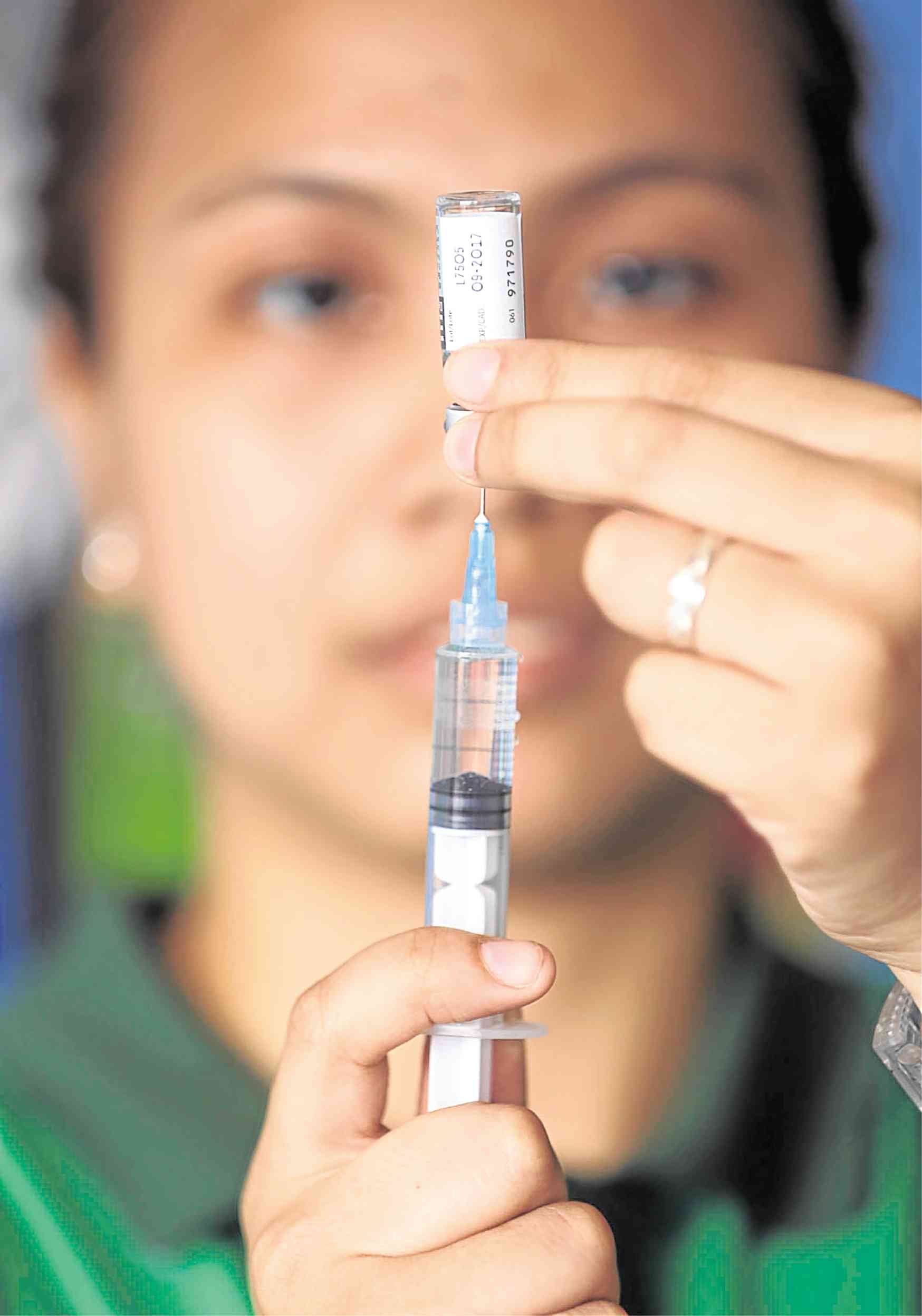 Four months after the sale of Sanofi’s Dengvaxiawas approved, it was administered to public schoolchildren in April 2016. —FILE PHOTO

“You’re stretching your wild imagination too far,” I recall her telling me in jest. “I sincerely hope we’re wrong with our apprehensions,” I meekly replied.

We highlighted then the “knowledge gap” on the vaccine’s long-term safety, particularly on year three after its administration. The clinical trial findings, published in the New England Journal of Medicine, were not quite reassuring there were no serious side effects on the long-term in all children who were vaccinated.

Last week, Sanofi issued an advisory of potential harm in vaccinated children who didn’t have a previous infection. The company disclosed a new data analysis showing that if Dengvaxia is given to individuals who haven’t been exposed to dengue, there is a risk of more serious infections when they get infected with the virus naturally.

One thing quite unique with dengue compared to most infectious diseases is that the second infection is typically much more serious than the first. Researchers have already earlier established that when the vaccine is given to dengue-naïve individuals (someone without previous dengue infection), it acts just like a natural infection “but without making recipients sick.”

Should the vaccinated individual get infected by dengue naturally, their immune system then treats it as a second infection that can be much more severe. This conclusion was made by a team of experts from Imperial College London, Johns Hopkins Bloomberg School of Public Health and the University of Florida.

A benefit of the vaccine, however, was seen in those who have already been exposed to the virus before their vaccination. This is a much smaller percentage of the total population who were deemed good candidates for vaccination.

In the school-based mass vaccination initiated by the Department of Health (DOH) two years ago, the close to 500,000 schoolchildren vaccinated did not undergo any testing for positivity for dengue infection prior to vaccination. In all probability, the majority would have turned out negative and should not have been vaccinated.

We pointed out then the lack of adequate baseline data to decide which areas really had such a high level of exposure justifying mass vaccination. It was simply based on the general “perception” that dengue was prevalent in many areas in the country. As the local adage goes: “Marami ang napapahamak sa maling akala.” (Many get into trouble because of wrong assumptions.)

Now Sanofi is advising doctors to hold off vaccination if they’re not sure if the individual has been exposed to dengue. It’s a good gesture, but they should have tempered their initial enthusiasm to promote the vaccine to the public, even partnering with a local retail chain, even before all doubts on the safety of the vaccine have been cleared.

“Dengvaxia provides persistent protective benefits against dengue fever in those who had prior infection. For those not previously infected by dengue virus, however… more cases of severe disease could occur following vaccination upon a subsequent dengue infection,” the Sanofi statement warned.

Sanofi and the DOH will have to do a lot of explaining to the close to 500,000 public schoolchildren who were vaccinated without prior testing. Why did they seemingly disregard the strong words of caution of experts including Dr. Scott Halstead, the acknowledged leading figure in dengue research in the past 50 years, who reiterated the serious concern on the vaccine
—that it may even enhance the development of dengue, rather than prevent it?

“It’s happened. We have a vaccine that enhances dengue,” Dr. Halstead was quoted in an article published by the Center for Infectious Disease Research and Policy in the United States.

This is not the time to point accusing fingers, but certainly, saying simply, “Sorry for the oversight,” won’t be very reassuring to the schoolchildren and their parents who will have to worry endlessly about the prospect of a severe dengue infection for their children.

Sanofi should return the P3B the government paid for Dengvaxia. The government can use the money in the long-term surveillance of the schoolchildren who were given the vaccine. For as long as these children are alive, Sanofi and DOH have a responsibility to watch over them and ensure they don’t get the potentially life-threatening reinfection with dengue.

Our lawmakers, who seem to have the same enthusiasm for fast-tracking the legalization of medical marijuana, should heed the lesson being taught to us by this Dengvaxia oversight. They should listen to the experts, the majority of whom are warning of the serious long-term consequences of such a move.

When too much pressure is exerted on our local Food and Drug Administration (FDA) to approve certain products, the haste can lead to disastrous consequences due to cutting corners without thoroughly evaluating the safety and effectiveness of a product.

There is no need for a law to legalize medical marijuana, and I’m afraid our lawmakers are just wasting precious time listening to anecdotal testimonies of its purported benefits. The FDA has set guidelines, policies and methods to evaluate the scientific evidence-based merits of any medicine which can benefit patients for the conditions it’s indicated for.

If a legitimate drug manufacturer has a medicine derived from marijuana, which is shown to have undergone satisfactorily all the stages of development and clinical trials, and shown to have benefits which outweigh its risks, then I’m sure the FDA would approve that product with the usual precautionary controls for all regulated medicines.

There is also a law in place for “compassionate use” of essential products. But this channel should not be abused to make available to the public products with no adequate documentation on their safety and efficacy.

The physical, psychological and even societal complications of legalizing medical marijuana are far more serious than a dozen Dengvaxia miscalculations.