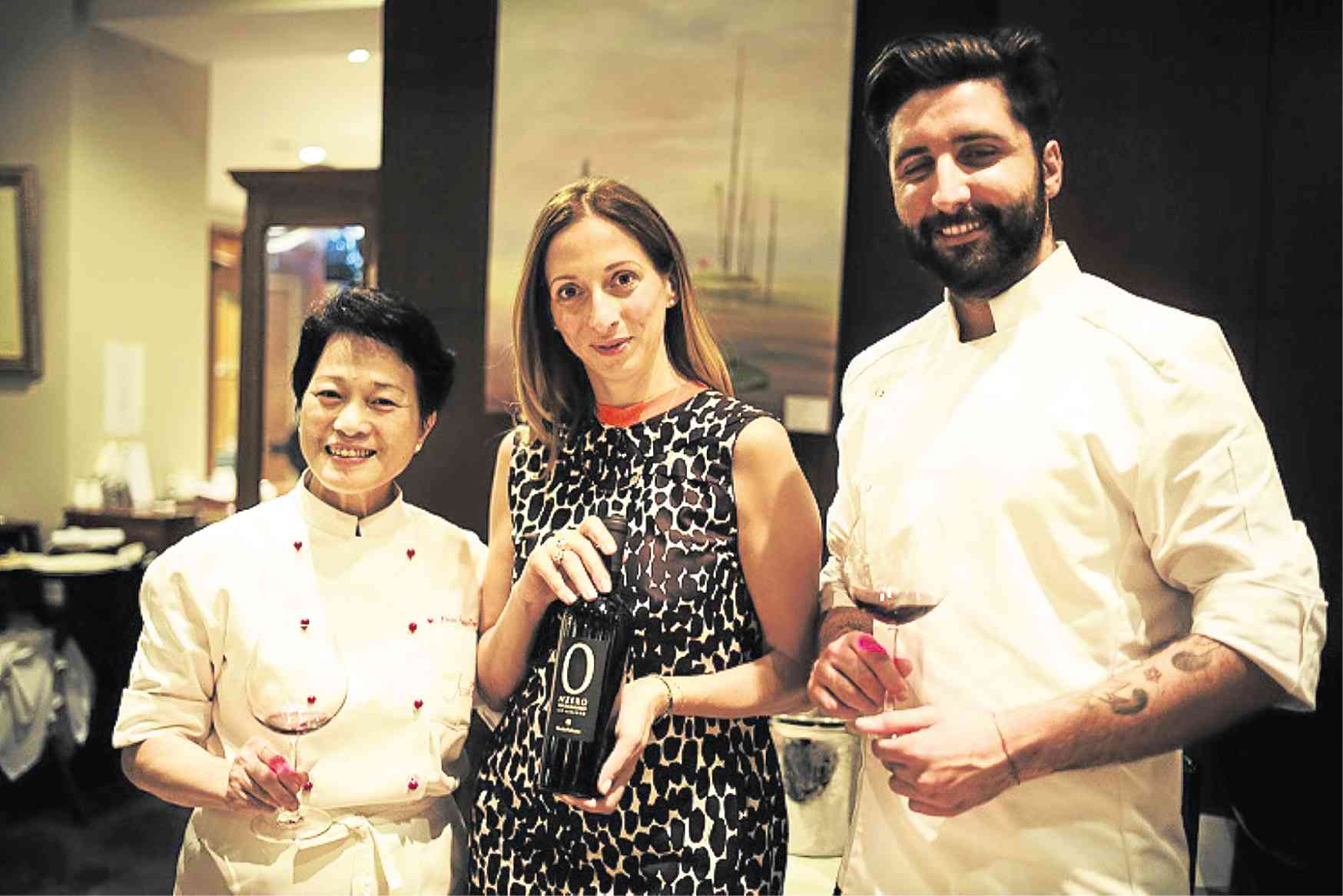 The grape varieties used for the wine at dinner were strange to me—Primitivo, Negroamaro, Fiano, Aleatico. But there would be time to ask the wine producer later about those.

Meanwhile, dinner was being served. The first three seafood courses were cooked by visiting Italian chef Musaro Roberto Rocco, while the meat course and dessert were by chef Jessie Sincioco at Chef Jessie restaurant at Rockwell, Makati.

Musaro is the chef de partie of the Origano Osteria located at the Menhir Salento winery, where those still mysterious grapes grow to produce the wines we were having that evening.

The winery is in Puglia, the southern region described as the heel of the Italian boot with miles of Mediterranean coastline. Which was why he was cooking the first three courses of seafood.

Wisely we avoided the delicious breads, especially the ciabatta served with that special dip of Chef Jessie’s. The rolled up menu had only the Italian names for each dish, flexing our Italian culinary language knowledge. Mostly we guessed correctly.

Squid with tomato coulis was the first course. The squid had its skin removed, which as far as I know, is the Italian way, so it was all white, probably just poached a bit to emphasize its freshness, was very tender with flavors from the tomato, the powdered capers and seaweed completing the Mediterranean seaside experience.

The squid dish was served with a Negroamaro Rosato “Novementi,” rosato being Italian for rosé, light, not sweet and perfect for seafood.

Negroamaro is a black grape, a variety grown throughout Puglia. The peach pink hue comes from the process a rosé goes through, the grape skin exposed to the juice for a short while.

We would meet this grape again later.

The next course seemed like a risotto but was really pasta shaped like little tubes called tubettino, with fagioli that is similar to white kidney beans.

The mix of mussels and shrimps again stressed the seafood preference of Puglia, its sauce made with wonderfully creamy Pecorino, a hard cheese made from sheep’s milk.

The pasta dish was accompanied by a white wine, “Pass-0,” made from Fiano grape, another Italian varietal, the wine acidic, light, perfect with the dish.

As the third course was being served, someone at our table said that she now knows what spigola meant because it was easy to identify the fish before us—sea bass. It was served in a soup that was called Mediterranean, its light broth hinting of ingredients in the region—olive oil, tomato, olives.

It was the wine served with the soup that stole the show. Its black bottle was marked “N.0” or the number zero.

We would learn that it was the first wine produced by the Menhir Salento winery. Made from the indigenous Italian grape variety Negroamaro, it was deep dark ruby, with the taste of spices and cherry. It was much lighter than expected and so it paired beautifully with the fish.

But the bigger story was that “N.0” was what Pope Francis liked, and always had with his meals on his Philippine visit. Apparently, of all the wines presented to the committee handling the papal visit, it was “N.0” that was approved.

So it wasn’t also a surprise that this wine dinner was held at Chef Jessie’s restaurant—it was Chef Jessie who cooked for the Pope on his visit. (See related story on this page on Chef Jessie’s recent culinary adventure in Washington DC.)

It was Chef Jessie’s turn to serve her course, grilled black Angus fillet mignon with a sauce of morel and accompanied by brown and wild rice and a vegetable risotto.

It came with another red called “Quota 29,” the number indicating the 29-meter altitude of the vineyard where the Primitivo varietal grows to produce this deep red award-winning wine.

For dessert, Chef Jessie’s mango panna cotta came with “D’Alesio” in a squat bottle made from Aleatico grapes—a dark red dessert wine that tastes of prunes and could pass for port.

Translating was Gale Atienza, president of Iphor Trading, wine distributor, who was with the company’s managing director, Adrianno Stefanutti.

The winery was founded in 2005, very recent compared to other vineyards that have been owned by families for generations.

Miriam’s husband, Gaetano Marangelli, founded the winery. The grapes mentioned are all indigenous Italian varietals, but it is Primitivo that has a counterpart among the widely known grapes—the California Zinfandel.

Miriam Daniele had a gift for each guest, a card with a quote from the Stoic philosopher Epictetus. It said, “No great thing is created suddenly.”

The fig or the grape or the wine takes time, and so must “first blossom, then bear fruit, then ripen.”

Food for thought at the end of dinner.