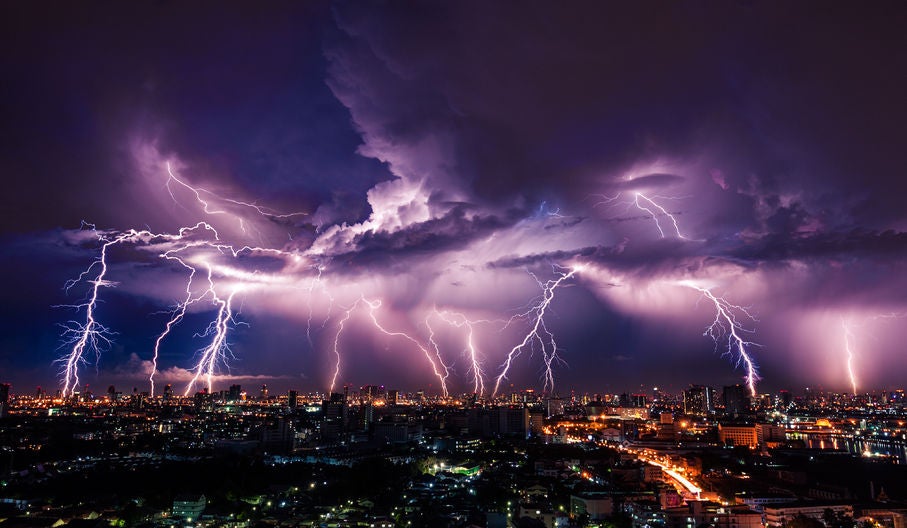 The skies of Tokyo were recently lit up by numerous lightning strikes brought about by a large stormfront.

The stormfront went over Tokyo on Aug. 27 and residents were shocked by the light show that quickly followed afterwards, according to Japanese online gaming outlet Hachima Kikou via SoraNews24.

In the span of 10 minutes starting at 8:09 p.m. Franklin Japan, which specializes in providing up-to-date lightning information, registered a total of 1,246 lightning bolts within a 50-kilometer radius from Tokyo Station.

Twitter user “@maximillianaire” had been walking outside while recording the clouds when a sudden flash appeared in front of him–a close call.

guess I don't need to get food tonight after all, jesus christ#雷雨 #雷 pic.twitter.com/v86V0SuWxo

Half-Japanese Australian Oona McGee recorded the light show through a window and talked about an old Japanese saying told to children.

Well, that was quite a show! Haven't seen lightning like that in Tokyo for years. When I was little my mum would tell me to hide my belly button during a storm so the god of thunder wouldn't take it away. Hope you all hid your belly buttons!#雨 #雷すごい #大雨 #雷雨 #雷 #嵐 pic.twitter.com/WMXRuflOjf

Twitter user “@siokaraikano” tweeted what appeared to be a composite image shot from his Pentax K-1 which showed multiple lightning strikes around his apartment.

Photographer Kagaya (@KAGAYA_11949), on the other hand, braved the extreme weather with his camera gear and captured some beautiful shots from a rooftop while the vertical Cumulonimbus clouds, called “thunderheads,” were still a safe distance away.

Although Kagaya tried to exercise caution for the sake of his art, he too experienced a bit of a close call, thanks to his equipment being natural lightning bolt magnets.

Heavy rainfall followed the heavenly light show, which flooded some train stations and caused the nearby Meguro river to overflow in certain areas. The Japanese refer to this kind of downpour as “guerrilla rain,” which could deposit a lot of water in short span of time. The waters eventually receded, but the rainfall still delayed some transportation systems and briefly cut power to about 7,700 residences in the Tokyo Metropolitan area.  Alfred Bayle /ra