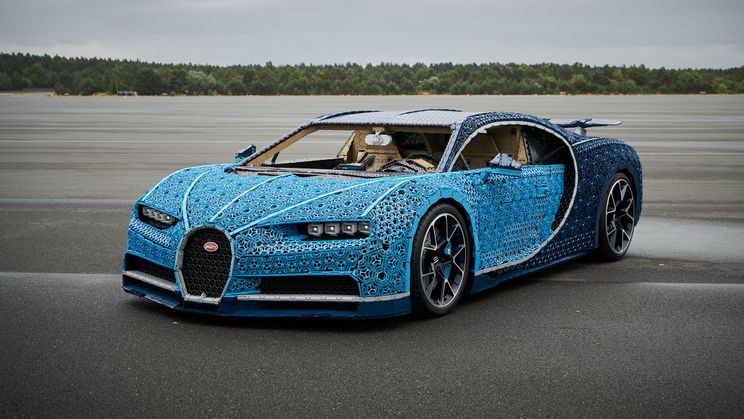 Lego showcased the creative possibilities of its Technic line by building a full-scale, working replica of a Bugatti Chiron luxury car.

The Lego Chiron was composed of over one million Lego Technic elements. The replica consisted of nearly all Lego elements and even has the same pop-up rear spoiler, which ran on Power Function motors and pneumatics. The only bits not made of Lego elements are the steel roll cage, Chiron wheels and a steel frame, according to Top Gear.

Lego Chiron’s engine was made up of 2,304 Lego Power Function motors, which pumped out a theoretical 5.3 horsepower. Its estimated torque measured up to 92 Newton-meter. Top speed was a theoretical 28.97 kilometers per hour. Since Power Function motors are battery-operated, this Chiron replica is essentially an electric vehicle. Compared with the real Chiron’s four-wheel-drive system, Lego Chiron’s engines only put out power through the rear wheels.

The replica doesn’t have an acceleration pedal, so forward movement was accomplished through a potentiometer, which determines voltage levels. However, a traditional break pedal was still present.

The Lego team behind the project said in a statement that it took 13,438 man-hours of development and construction to build the one by one replica.

As icing on the cake, Lego got former Le Mans winner and test driver of the real Bugatti Chiron, Andy Wallace, to drive its Chiron replica.  Alfred Bayle /ra