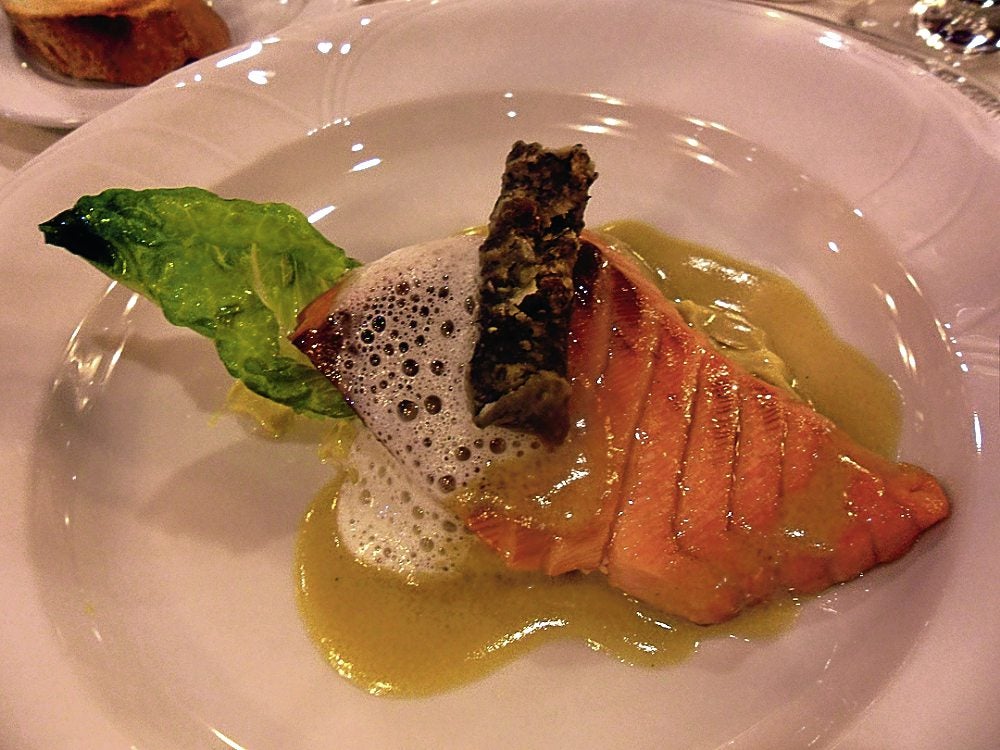 Dino Ferrari. His name is familiar to those who are Ferrari sports car fans or owners.

But the Dino Ferrari who made news recently is the winner of Celebrity Chef at the Asian Food Channel. And his prize is a one-year contract with the Eastern & Oriental Group as creative chef with a show on AFC. His father is Swiss-Italian, which explains the family name. His mother is from Pampanga.

Glenda Barretto told me about him months ago—that there was a trainee in her Via Mare kitchen who was going to compete in a cooking contest on television. Because there are so many these days vying for the viewers’ attention, I didn’t bother to ask which one. She said he was focused on his training and she was amused seeing this young chef sweating it out in the kitchen. Dino said he asked Glenda what judges looked out for in competitions and her pointers helped him win.

When an invite came to a lunch to be cooked by the winner of AFC Celebrity Chef, it turned out to be that of Dino. He has had very little culinary training in school, at the L’ecole Hoteliere de Lausanne, because he had to go home before he could finish the course. But he did apprentice in California, in Orleans, France and in Switzerland. He also trained here under chef Cyrille Soenen at Restaurant Ciçou.

The contest had hundreds of applicants honed down to 34, and then there were two—both Filipinos—Diane Montecillo and Dino. Those who watched the show tell me that Diane is much more proficient in cooking because she is a culinary teacher. But the medium demands a chef who is both light on the eyes, cool under pressure and knows how to be an entertainer. And Dino was a good fit.

What lessons did he learn during the competition? Dino wrote: “I learned that it’s important to listen to instructions clearly, stay true to who you are, and cook the food you love to cook. Don’t try to be someone you’re not. That was actually my strategy all along and it worked.”

Lunch for a group of us began with coconut mussel soup with slice of crisp bacon. Salad was salmon and shrimp with a kiwi dressing. My favorite was the pork tenderloin with the very good raisin pesto, apple slaw with fennel, apple puree and garlic foam. Another salmon dish appeared, quite a surprise after the meat course. It turned out to be the signature dish that helped him win—salmon with white-chocolate wasabi sauce. Dessert was chocolate mango tart.

With dessert came Dino, looking none the worse for wear after having cooked for about 30 guests. Well, for the finale of the contest, he and Diane had to cook for 300 guests. Apparently the judges were looking at how he handled the kitchen staff as well. For the lunch at the PICC, it was a sort of homecoming for Dino because he worked with the same Via Mare chefs who helped him do that lunch.

So he’s off to Penang, his home for a year to finish his contract. Good luck, Dino.

‘The foods of Jose Rizal’

Several people have told me that they had seen me on television talking about Jose Rizal and the food he wrote about and liked to eat. I think I’m the only one who didn’t get to watch that show. I remember telling my interviewer that I didn’t really know much about his favorite food. But as to his writings, there are many novels and essays one could refer to.

But now, there is a book that can tell you what Rizal ate and liked to eat. “The Foods of Jose Rizal” by Felice Sta. Maria was supposed to be finished by the time the nation celebrated in 2011 Rizal’s 150th birth anniversary, but it was finished only last December. Never mind. It’s a great reference book, fun to read even if scholarly.

Of course, the food in his “Noli Me Tangere” is cited such as the tinola of Padre Damaso and the fish dishes brought to that picnic at the lake, each one mentioned according to how it was going to be cooked.

A pleasant surprise was reading how the artist Juan Luna wanted Rizal to have an illustrated version of the “Noli” and even drew many of the characters such as Maria Clara. According to Felice, Luna signed the drawing “JB” for Juan Buan, and I still giggle at the thought of Luna using the Tagalog translation of his surname.

In 1888, Rizal went to London to copy “Sucesos de las islas Filipinas” (Events in the Philippines), written by Antonio de Morga, about precolonial Filipinos. For Rizal, this rare manuscript showed that Filipinos had their own culture even before the West colonized the country. He copied the manuscript page by page and had annotations he wanted to add as footnotes if a new Morga book was published.

For instance, when Morga wrote how indios “prefer meat and fish, saltfish which begins to decompose and smell…,” Rizal commented how “… this is another preoccupation of the Spaniards who, like any other nation, in the matter of food, loathe that to which they are not accustomed… The fish that Morga mentions does not taste better when it is beginning to rot; all on the contrary, it is bagoong, and all those who have eaten it and tasted it know that it is not or ought not to be rotten.”

Read this book to be reacquainted with Rizal, the food he ate, he wrote about and even cooked.