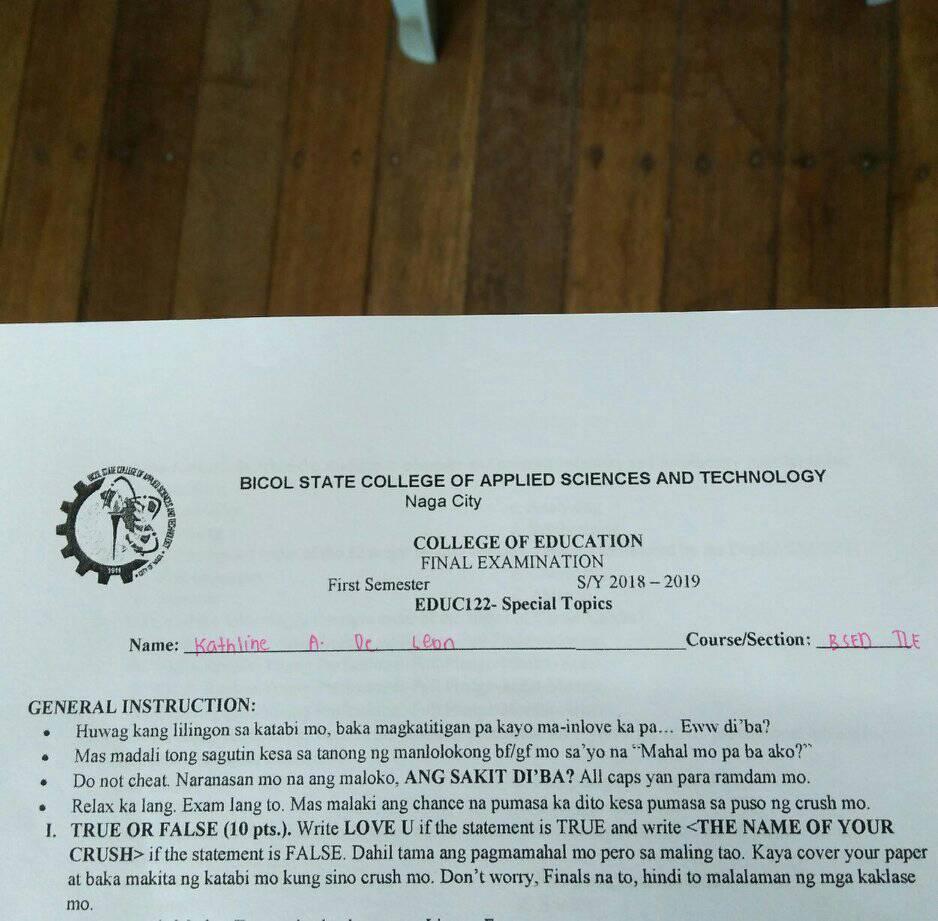 Tests are a part of student life as much as the many attempts to cheat during exams when the teacher’s not looking. But one college professor wanted none of that and made sure his students understood in a language they knew well: “hugot” lines.

A snapshot of a test paper from the Bicol State College of Applied Sciences and Technology in Naga City was uploaded by Facebook user Kathline Abias De Leon on Oct. 11. The post has since been shared nearly 3,000 times and liked over 3,600 times, as of this writing.

While the test paper appeared normal by all standards at first glance, closer inspection of the general instruction section revealed a professor’s witty attempt to stop students from cheating.

(Don’t look at your seatmate, your eyes might meet and you could fall in love… Eww right?)

(This [exam] is easier to answer than the question asked by your lying bf/gf, “Do you still love me?)

By this time, students may have been grinning to themselves and wondering what they just read. Before they got too distracted, the professor went back to topic with the third line, “Do not cheat. Naranasan mo na ang maloko, ANG SAKIT DI’BA? All caps yan para ramdam mo.”

(Do not cheat. You know what it’s like to get cheated on, IT HURTS RIGHT? It’s in all caps so you really feel it.)

(Just relax. This is just an exam. There’s a higher chance of passing here than winning over your crush’s heart.)

As a failsafe to make sure that the students really cover up their own papers, the professor gave the true or false exam a slight twist. Students were told to write “LOVE U” when a statement was TRUE, and “the name of their crush” if FALSE.

Some Facebook users found loopholes in the instructions such as when one’s crush was sitting next to him or her. Rey Mark Mondragon said he would open his paper so that she would know.

Meanwhile, user Luz Basagre wondered if the spaces could be left blank if one didn’t have a crush.

Ultimately, many of the commenters said they wanted the professor to be in their class.  /ra