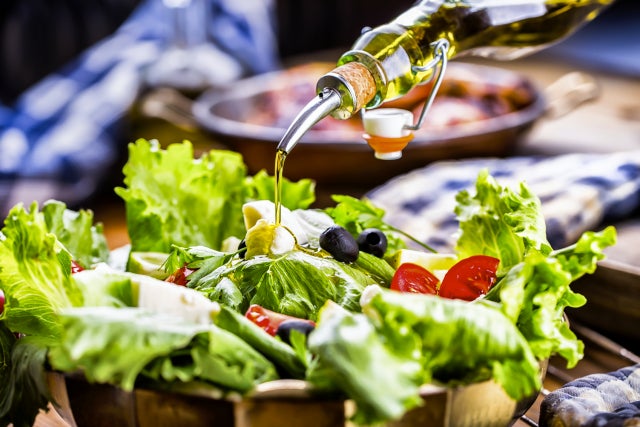 Following the popular Mediterranean diet while taking statins could reduce the risk of cardiovascular mortality, according to new research. © MarianVejcik / Istock.com

New European research has found that following a Mediterranean diet while taking statins could reduce the risk of death for those who have already had a heart attack or a stroke, especially the risk of death from cardiovascular causes.

The new study by researchers at the I.R.C.C.S. Neuromed, Pozzilli, Italy, recruited 1,180 participants with a history of cardiovascular disease and an average age of 67.7 years.

Participants were followed for a median of 7.9  years, during which time their adherence to the diet was measured by a Mediterranean diet score.

The findings, published in the International Journal of Cardiology, showed that participants who followed a Mediterranean diet had a lower risk of all-cause, cardiovascular and cardiovascular/cerebrovascular death.

However, statins alone did not lower risk of death.

“We found that statins and Mediterranean Diet together were more effective, as compared to one or the other considered separately, in reducing the risk of cardiovascular mortality. Likely, a Mediterranean diet facilitated the beneficial effect of statins, that in our real-life study were generally used at low doses,” said first author of the study Marialaura Bonaccio.

Statins are prescribed for patients with cardiovascular disease, along with the recommendation to adopt a healthy diet.

A Mediterranean diet encourages a high intake of fruit, vegetables, fish, pulses, olive oil and whole grains, and a low intake of meat, processed foods, and dairy products. It has previously also been linked with a reduced risk of heart disease.

The team also looked into possible explanations of why the interaction between medication and diet had a positive effect, finding that adherence to the diet along with statins appeared to reduce low-grade inflammation, although not levels of cholesterol.

“The favorable combination of statins and Mediterranean Diet appeared to act, rather than on cholesterol levels, by reducing subclinical inflammation, a condition that predisposes to a higher risk of illness and mortality. This finding is of particular interest especially in the light of our observation that a high level of subclinical inflammation doubled the risk of mortality in patients who already had a heart attack or stroke,” explained study author Licia Iacoviello.

“Our data suggest that we should focus more on the possible interactions between food and drugs, an aspect largely neglected in epidemiological research,” said Giovanni de Gaetano, director of the Department of Epidemiology and Prevention, who now calls for further research to confirm the current findings. MKH