There’s more to salt than its taste | Inquirer Lifestyle 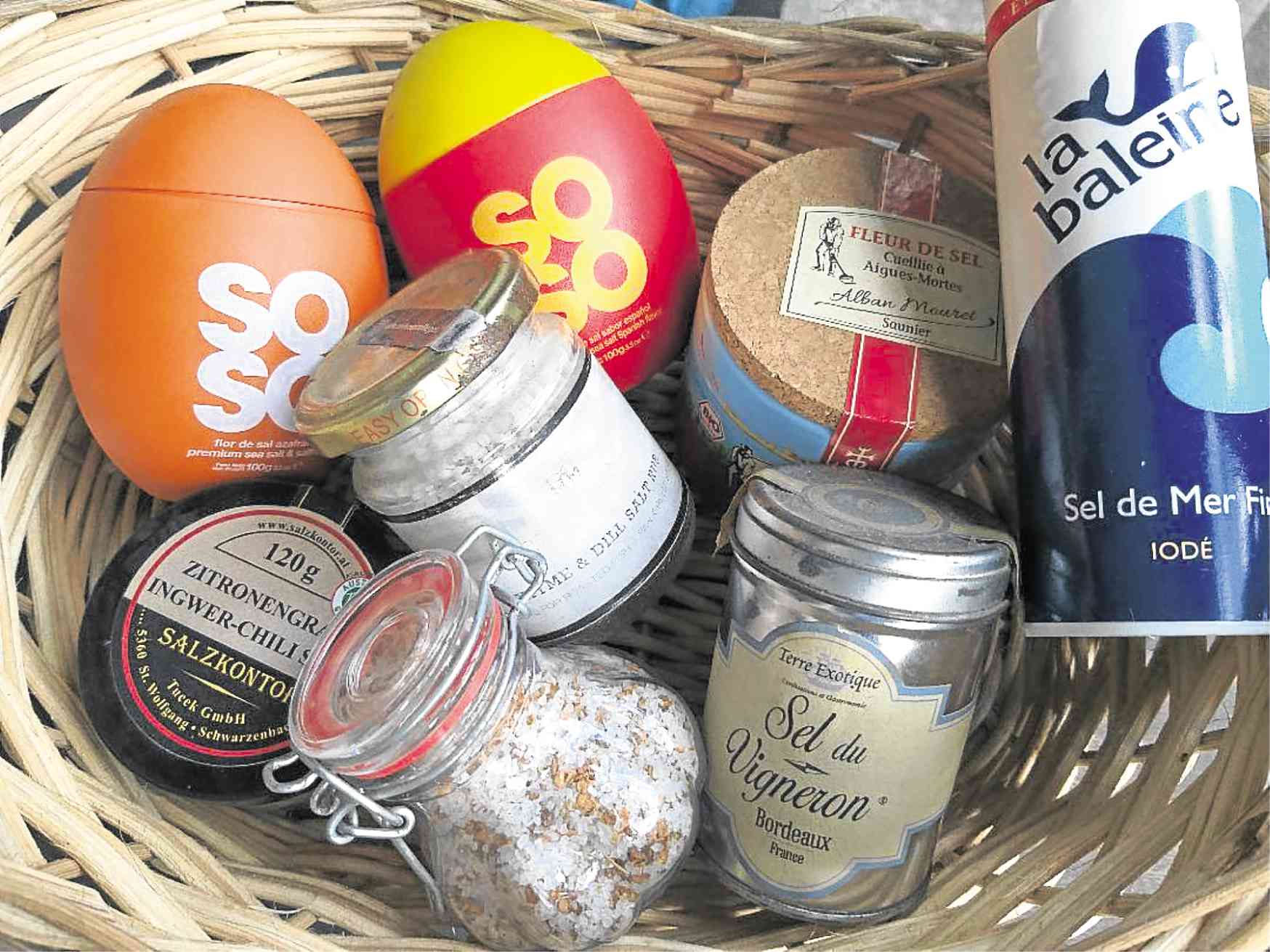 There’s more to salt than its taste

A salt collection has displaced the vinegar collection in my display corner. It started with Dasol, the salt flakes of Pangasinan that my friend Anne Castro used to market. That was years ago when the town of Dasol wasn’t even on the culinary map.

Looking at the white pristine product reminded me of the vaunted French fleur de sel (flower of salt). Anne sold it mainly to foreign chefs here who must have recognized the good quality of the product that probably reminded them of the French version.

Dasol salt was light and clean-tasting. When I told her that my supply was running low, Anne said that she found it difficult to get the salt out of Dasol because the New People’s Army (NPA) controlled the supply by imposing taxes on its harvest and transportation.

Then Anne left to marry her fiancé and joined him in Austria. It amused us to think that she exchanged salty for sweet.

It was reassuring to read how Dasol is now known for its salt and that its beaches are drawing in tourists. Make a place progressive and you solve the insurgency problem, I suppose.
Inspiring discoveries

Salt blocks like the tultul of Panay island and Guimaras or the duldul of Samar were inspiring discoveries. My article drew feedback of salt blocks from different places in the country, such as the tap-og of Mauban, Quezon, binaluto in Cabra island in Lubang.

In Capiz, I was given a big block called dukduk, but I was not allowed to take it on my flight. I had to break the dukduk into smaller chunks and place them in plastic bags. No reason was given for the restriction, though someone suggested that it might be because salt is corrosive. It didn’t seem a good enough explanation because salt can hardly melt on a one-hour flight from Capiz to Manila.

It was Tatung Sarthou who featured the salt beds of Pangasinan in his talk at Madrid Fusion 2017. He had warned that artificial salt was being sold in wet markets, chemically produced, with no minerals. Salt prepared that way gives rise to a health issue and doesn’t ferment food properly.

There is a more compelling problem with Philippine salt. By law, salt has to be iodized to lessen the cases of iodine deficiency in children. But a later study by the American Journal of Nutrition showed that while iodized salt decreases iodine deficiency, it doesn’t address the prevalence of goiter.

We cited it in a December 2018 letter to President Duterte, and added the concern by our food industry that there are markets like Japan which will not accept iodized salt as ingredient in our food exports.

We did not mention our experience with how salt was iodized by producers without a set formula, but by just spraying the surface of a mound without mixing it.

The Office of the President sent a reply dated Jan. 18, 2019, that my letter was forwarded to Health Secretary Francisco Duque III “for appropriate action, consistent with existing laws, rules and regulations on the matter.” There has been no action yet, at this writing.

Mark Kurlansky wrote about “Salt: A World History” (Penguin Books, 2003). I haven’t read it cover to cover like I did his book, “Cod: A Biography of the Fish that Changed the World” (Penguin Books, 1998). I suppose when he did “Cod,” he knew that the fish and salt go together because it was salted cod that changed the world’s diet for a time.

In Spain, on a tour of one jamon Serrano producer, we attended the demonstration of the salting of the ham. We were told that the factory’s source was a salt mine, but given the amount of salt needed daily, they are looking for other sources. Multiply that by so many factories, and that should spell a problem in the future.

In Korea, there is a group promoting salt as a health product. Last time I checked, there was even a salt room used much like a spa, where blocks of salt make up the walls and the bed.

My collection has a saffron salt from Spain and some French salt, one of which is a Fleur de Sel de Camargue. I thought the latter was top class until I read an article by David Leibovitz that said the best was Fleur de Sel de Guerande in Brittany because it is harvested by hand, unlike the Camargue which is mechanically harvested. Oh, well, it has a nice container anyway.