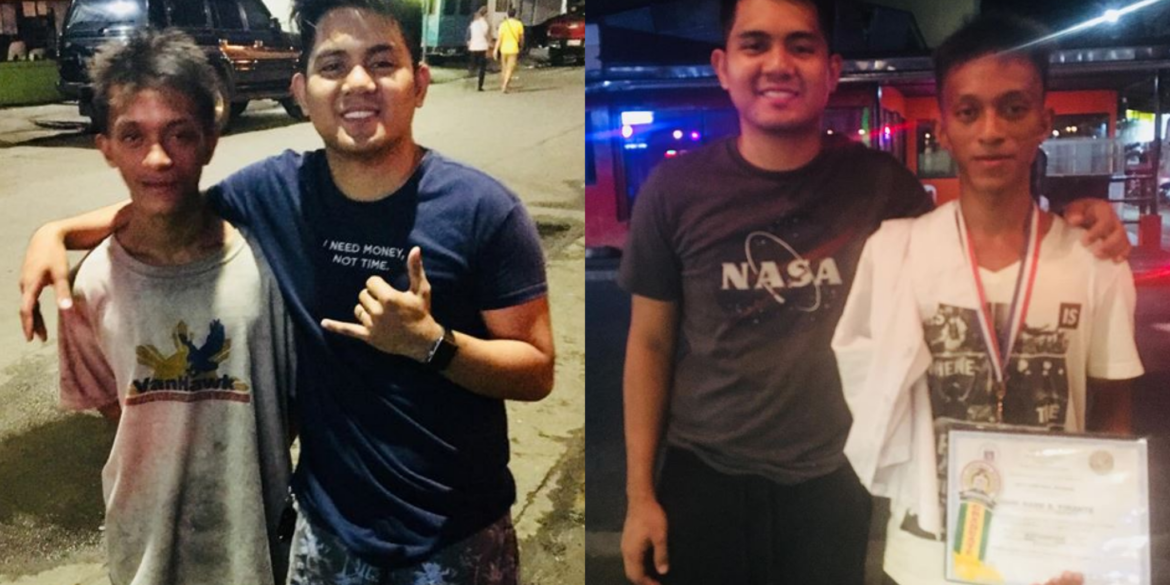 The wrath of Supertyphoon Yolanda (Haiyan) took loved ones and home away from him, but not his hope.

John Mark Pirante was the family’s lone survivor after Yolanda struck in November 2013, leaving thousands of casualties and wiping out communities including several villages in the hardly hit Tacloban City.

He was left homeless and rendered completely on his own. Pirante has been living in the streets of downtown Tacloban–all by himself.

Despite life’s tragedies, Pirante found a way to be able to get back on track. He makes a living by offering his services such as collecting garbage and doing cleaning chores.

His hard work has paid off as he recently graduated from the elementary level in City Central School in Tacloban last April 3.

His inspiring story has been shared on Facebook by Renz Peque, a fellow Taclobanon who has witnessed how Pirante beat the odds and found calm after the storm.

In a Facebook post on Wednesday, Peque wrote, “I know some of you will recognize this kid. If you see him around, please help him in any way you can. His family died during [the] typhoon Yolanda and he has been living in the streets since then.”

“He often comes to my store to help clean the [storefront] or [to] collect the garbage in exchange for food or money,” Peque said, sharing how he used to know Pirante.

Peque also revealed in the same post how Pirante went up to him on Wednesday morning and delightedly told him the news of his graduation that day.

“Earlier today, when he came over to collect the garbage, he shared his big news to me that he would be graduating today.”

Complimenting his good friend’s accomplishment, Peque invited him to come back to the store. “I congratulated him [for] he totally deserved it and told him to come back [in the] afternoon because I would be giving him a graduation gift.” When he came back at around 7:30 p.m., Pirante showed Peque his diploma and a medal

Remembering his late family, Pirante then visited them in the cemetery to proudly offer them his hard-earned awards before heading back to Peque’s store.

“Apparently, he had other medals which he left [on] his family’s tombstones,” Peque stated.

Peque told INQUIRER.net in an exclusive interview how he met Pirante.

(We knew each other because he always came to my store. I learned that his parents died during  typhoon Yolanda and he funded his own schooling.)

According to Peque, John Mark’s teachers who knew his situation also helped him, especially with his school needs.

Whenever Pirante dropped by the store to collect garbage and do some other tasks, Peque paid him not only with money but also food.

Although unsure of his age, Peque told INQUIRER.net that Pirante is probably 14 to 16 years old, and is now an incoming high school student.

One thing Peque is sure about his friend Pirante is that he is bent on pursuing his dream of becoming a soldier someday.

Laguna student who woke up from coma perseveres and graduates